The investigation originally involved nine counties, but has expanded to include many more. A total of 57 are now included.

This week, police raided the business offices of the Indiana Voter Registration Project, 2425 North Meridian Street, Suite A, in downtown Indianapolis amid reports of fraud.

This coming on the heels of investigations in Virginia of voter fraud in 8 counties coupled with reports of voter fraud occurring in Philadelphia and elsewhere.


There are a slew of other states investigating reports of voter fraud as well. People should make sure their info is up to date with what ever agency in your state deals with voter registration. I have a feeling this is going to be a major problem this election cycle. 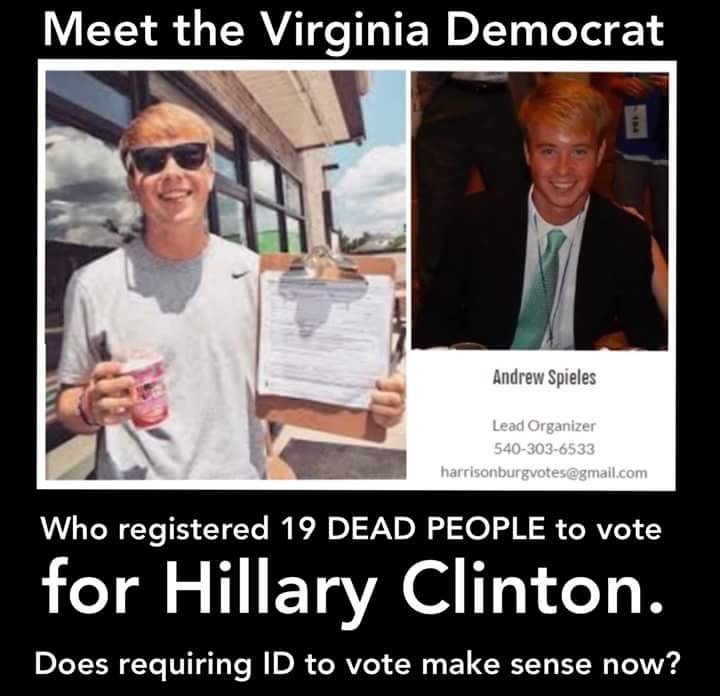 I agree madness it isn't in already.
Hope the guy in the photo gets punished.

originally posted by: Bluntone22
I live in indiana and I need to show my ID to vote.
Not sure how you could fraud here unless it's with early mail in voting.


Do they use Diebold voting machines?
There's some room for fraud there.


No clue.
I just know they check my photo ID against the address in their book.
Machine tampering is above my pay grade.


No clue.
I just know they check my photo ID against the address in their book.
Machine tampering is above my pay grade.

I wish we had that in Pennsylvania.
Our voter ID law was struck down.

I'm not sure if you intended this thread for serious discussion or not, but researching your first link, apparently the group doing voter registration has either forged or otherwise falsified registrations in some way, I believe the number mentioned was 10 discovered in one county, and then the investigation spread to 9 counties and then to 57 of Indiana's 92 counties (I suppose it's reasonable to presume that is because the registration group had been involved in those counties too.) Nothing was presented in your article that I could find above the 10 faulty registrations found in the one county.

So ... I know any type of actual fraud is an important technical issue, but there's not any real voter (no altered or miscast votes) fraud in this instance is there? more on the order of election fraud, if indeed that proves to be the case and it's not just a matter of, as it often is in these scenarios, one employee of the registration group taking stupid shortcuts to up their count.

Investigations are fairly constant in today's contentious political environment, and in this case, indeed, it seems the system is working, a vigilant Elections Board employee noticed the anomalies.

Your other examples demonstrate very diverse but limited numbers of issues as well ... for your example in Alabama, apparently one of the candidates in a local election (or their proxies) was requesting 80 applications for absentee ballots be sent to their residence, which was of course caught and stopped.

Your example in Virginia involves one individual's ballot. One. (Population of VA in 2014 8.23 million) Source

The example from northern California seems to revolve around a marijuana referendum in one county in the primary back in June, and there were no examples of registration fraud actually FOUND only suspected.

So, now ... all told, how many instances of proven registration fraud are involved here in your presentation?

Most of these regard ongoing investigations quite often involving nothing more than allegations of illicit activity.

Now, you, I and everyone else reading this knows that voter/election fraud is always played up more when Republicans are in danger of losing elections. That's a given. Further these instances are usually used to promote calls for Voter ID (which of course, does nothing to address election fraud, but we'll ignore that, I'm fine with folks showing ID to vote, as long as the State facilitates the process of getting an ID).

I'd like to know what your intention is in bringing this to our attention. Is it in support of the allegations that Trump has been floating regarding "cheating" that he will use to explain his likely defeat in November?

Or are you just casting more chaff into the winds of chaos swirling around this election?
edit on 7-10-2016 by Gryphon66 because: Noted

originally posted by: Bluntone22
I live in indiana and I need to show my ID to vote.
Not sure how you could fraud here unless it's with early mail in voting.

If you dig into the story...It's a whacko GOP Sec of State woman that directed the State Troopers to raid the voter registration office.

When people fill out voter registration applications...they are then vetted and checked out by the Sec of State's office for legitimate address etc.

So people on the street make errors or sometimes just BS when they give information to a guy/gal that solicits them. It happens all the time and the applications are tossed when screened by the Sec. of States office.

It's the Sec. of States job to screen applicants.
And it's actually illegal for the Voter registration office to toss applications, they are legally bound to give the secretary of state every application that is filled out even if the information looks wonky to them...which makes sense, because you don't want the voter registration people to have the ability to pick and choose what applications they forward to the sec of state.

What the Indiana Sec. of State did was ...rather than toss those applications...they decided to raid and shut down the voter registration drive offices and accuse them of intentional fraud....but only the offices that were registering folks in Democratic areas.

But only ten problematic forms have been explicitly identified by investigators, and nothing on these few forms demonstrate a fraudulent intent.

In addition, as Republican Lawson must know in her capacity as Secretary of State, Indiana law requires the Project to submit all forms that it receives, regardless of how they are filled out.

originally posted by: Gryphon66
a reply to: Indigo5

Add to that the "poll watcher volunteers" that Trump has repeatedly called for to be at polling places in minority neighborhoods?...

This election will set records for voter suppression and intimidation.


originally posted by: Gryphon66
a reply to: Indigo5


Add to that the "poll watcher volunteers" that Trump has repeatedly called for to be at polling places in minority neighborhoods?...

This election will set records for voter suppression and intimidation.

I'm not sure our friends understand the nature of that genie they're trying to let out of that bottle.

originally posted by: BlueJacket
a reply to: Gryphon66

I guess I'm missing your point.

Oh so sorry for poor spelling.
I meant: you're using Glen Beck as a reference?

originally posted by: BlueJacket
a reply to: Gryphon66

Oh so sorry for poor spelling.
I meant: you're using Glen Beck as a reference?

The group retorted that it had already submitted tens of thousands of registrations in Indiana this year and that by zeroing in on just a handful of problematic applications the state appeared to be criminalizing a basic feature of voter registration itself, which inevitably involves submitting paperwork that contains imperfections.

Varoga said that in Indiana, members of a voter registration drive cannot legally choose to discard applications; even if something appears faulty, the group must submit the application for the state to review. In recent years, Patriot Majority has conducted registration drives in 12 states, said Varoga, who asserted that it is a matter of routine practice for elections administrators to work with get-out-the-vote activists to discuss and solve problems with faulty applications.

I can remember when people would fill out registration forms with fictitious info, such as Donald Duck, etc. It could be that this was the case in Indiana, but in Indiana registration workers cannot throw these out.

and in Indiana, state police can even seize your personal cellphones over this

nearly a dozen police entered the Indianapolis offices of the Indiana Voter Registration Project with a search warrant and seized multiple computers, the personal cellphones of employees, and paperwork relating to the group’s get-out-the-vote operations in the state.

And so thousands of people who signed up to vote may not be able to, because the state is holding onto their forms in an "investigation". Of course, it's not a concern to everyone, just those who oppose a liberal group engaging in voter registration.

I suppose it may be a nutter involved
But as I said above. We must show photo ID'S to vote.
That is not voter suppression.

Thanks for pointing this out. All loyal Democrats know, there is no voter fraud, just Republican vote supression!

originally posted by: TonyS
a reply to: Gryphon66

Thanks for pointing this out. All loyal Democrats know, there is no voter fraud, just Republican vote supression!

Kewl! More dishonest hyperbole that contributes zip to this conversation.