posted on Oct, 7 2016 @ 06:41 AM
link
This new thread serves any up to date news regarding the heightened tensions with Russia and the west which surrounds the situation happening in Syria.
This thread should only include legitimate and noteworthy updates.

Finland's Defence Ministry says it has scrambled jets twice in the past 24 hours to monitor suspected airspace violations by Russian fighters.

A Russian Su-27 fighter was detected in the Gulf of Finland south of Porvoo late on Thursday, the ministry said.
Another Russian Su-27 was detected on a suspicious flight there earlier. "Russian military aviation over the Baltic Sea has been intense," it said.

Finland is not in Nato but co-operates closely with the 28-nation alliance.
Porvoo lies just east of Helsinki, and is 140km (87 miles) from the Russian border.

Given that the United States and Cuba have been resolving their differences. it will be interesting to see what Cuba says. Also, keep an eye on whose hurricane relief aid they accept.

Meanwhile, in Southeast Asia, the Chinese will consider the presence of a permanent Russian naval presence to be a provocation.

I doubt this will get much further than RT propaganda.

MOSCOW. March 28 (Interfax) - Russian Defense Minister Sergei Shoigu has described the media as a type of weapon, which cannot be used "in a negative way."

"The day has come when we all have to admit that a word, a camera, a photo, the Internet, and information in general have become yet another type of weapons, yet another component of the armed forces. This weapon can be used in a good and in a bad way. This is a weapon that was involved in various events in our country in different years, both in our defeats and in our victories," Shoigu said at an award ceremony of the MEDIA-ACE journalistic contest instituted by the Defense Ministry.

Well, according to the Russian Defense Ministry the following linked response denies one instance of a Russian fighter jet violating Finland's airspace but doesn't address the other instance in the 24 hour period described. I don't know the actual and truthful why (non-subjective and neutral) of the discrepancy but I wanted to post the report for the sake of what's being stated.

Will add this interesting piece from " The Moscow Times "


Coming on the heels of Russia’s excoriation of the United States for its accidental bombing of Syrian forces, the destruction of the UN aid convoy on Sept. 19 poisoned every ounce of trust built up by the ceasefire accord concluded scarcely one week before. Moscow’s perfidy has been at least as galling as its brutality in Aleppo. Yet, as long as the administration believes it is doomed to a Hobson’s choice between the errors of Bush's intervention in Iraq and endless diplomacy, it is difficult to envisage a change of course that would alter realities in Syria or diminish Russia’s ‘indispensability’ to conflict resolution.

have a friend down in florida getting hit right now, internet is down but he called me and is doing good.

we wouldn't have a problem with anyone if we weren't over there, still to this day I'm asking why we are. Never got a straight answer....... I'm a big stickler on asking where my taxes go and what they are used for. I no longer want to pay them. I'll go to jail or have to fork over the sum but I am done paying taxes to this country and their war machine.. lol..... it serves no purpose for me as a citizen..

Uh. should you write that on the internet? You know, BB is watching you. Could be construed as a confession.

have a friend down in florida getting hit right now, internet is down but he called me and is doing good.

we wouldn't have a problem with anyone if we weren't over there, still to this day I'm asking why we are.

Spain ceded Florida to the United States in 1823.

I am sure its a spoof but Russian weatherman discussing a nuclear strike on the USA..
( Found no News link )

Ahahahahh! The quote is right, but it's flagrantly taken out of context. Here's the full video, I'll translate a small part of the footage to give a right context for you (just give me some time), you'll laugh.))
rutv.ru...

The footage is devoted to a special Russian made device, something like a robust external hard drive with UPS and stuff for military use (the device was ridiculed in social media, so it gained popularity and they decided to devote a short telecast to it). So, basically they talk about device's reliability (in every sense of the word) in different conditions, including the nuclear electromagnetic pulse. The narrator gives an example (3:45):
"American military experts have calculated that if a nuclear warhead in near space above the state of Nebraska is exploded, it is capable to shut down all electronics in the US territory, southern provinces of Canada, and northern states of Mexico, and it is obvious that specialized computers must be equipped with systems that are capable to neutralize negative consequences of nuclear explosion..."

I've googled a bit and found the mentioned study, here's the quote:

A thin-cased 100 kiloton weapon optimized for gamma ray production (or even the relatively-primitive super oralloy bomb of more than 61 years ago) detonated 250 to 300 miles above Nebraska, might destroy just about every piece of unprotected electronic equipment in the continental United States, southern Canada and northern Mexico (except for small items not connected to any external wiring). Such a weapon would also very likely knock out 70 to 100 percent of the electrical grid in this very large area. Nearly all unprotected electronic communications systems would be knocked out. In the best of circumstances, as completely unprepared for such an event as we are now, reconstruction would take at least three years if the weapon were large enough to destroy large power grid transformers.

edit on 2016 by JedemDasSeine because: (no reason given)

posted on Oct, 7 2016 @ 09:14 AM
link
It appears that the Russian Navy aircraft carrier Admiral Kuznetsov hasn't deployed as of yet. Russia has announced that the carrier and carrier task force will deploy from the Kola Peninsula this month to the Eastern Mediterranean.

From the Severomorsk webcam on the 4th October 2016. This was the aircraft carrier returning from sea trials. 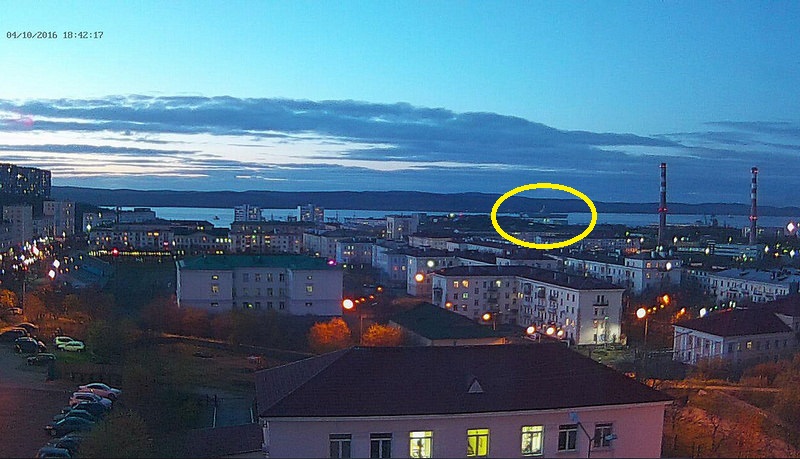 The following from Google translation of the Russian Navy news website.

According to him, the aircraft carrier on Monday, 26 September, left the waters of the 35th shipyard, went to the Barents Sea and is located near the Kildin Island. "To date, he took a full ammunition, including Wing" - said the source. It is assumed that in the next few days, the ship will return to Severomorsk for replenishment (water, fuel, food) for that he would need at least 10 days.

What a crock of #.
And the typical paid trolls will lap this hypocrtical double standard bull# up. Where are they btw? Has this months payments not come in yet?

Never mind that the US is well known for indiscriminate bombing of civilian targets.
But the real kicker is that the USA is guilty of an act of war, of unjustified and unprovoked aggression against a sovereign state, and not for the first time.

The USA has inserted terrorists that it has trained and armed, into Syria that have caused a conflict.
The USA and its allies including Israel have attacked Syrian government forces, aiding the terrorists.

Whose guilty of war crimes?

It's not a pretty truth for Americans and that is without taking into account how they've allowed and aided the terrorists to get their hands on chemical weapons that they've used in Syria so they can try create a pretext for an invasion.

Too bad for the zionist rats that the Russians have a strong leader who kicked their kind out or locked their Zionist asses up, and is now standing up against the Zionist World order plans.

You should have called it John Kerry Watch.

Are you saying that Russia is not attacking civilian targets? That would be a change from their policy in Chechniya, wouldn't it?

I think it's only a matter of time before WW3 starts.