posted on Oct, 6 2016 @ 10:25 AM
link
I hadn't watched this show until recently, while I was bedridden and looking for something to netflix binge. I am in the middle of season six so far. As I watch the show, I have seen a number of tactical blunders on the part of both the characters and their living assailants. I know that most of these goofs are the product of cinematography-- the director's need to tell a compelling story, rather than to demonstrate real crisis management.

But as I watch the show, and look at Rick Grime's group in the settlement in "Alexandria", I cannot help but think these are genuine security needs, and security measures they have the ability to create even with their limited resources. Here are three items I think they desperately need to fix:

1. Clear fields of fire at least 100 yards in every direction from the settlement's walls. And that abandoned house outside the front gate must be removed. Half of the show is assailants or walkers popping out of the woods "surprise!!!" I'd think they'd have learnt to hate surprises by season 6.

2. Fix the gate. They need a "sally port" within the gate; a big cage with a second gate just inside the main gate. That way, once you come into their settlement, you are in overlapping fields of fire and stopped until checked out. As many characters as get used as hostages with guns to their head, every car entering the gate should be checked for bad guys hiding the the trunk. The character should exit the returning vehicle when they come home, and then someone else should drive it to an "impound yard" next door. This would be a secure area inside a fence where it can be unloaded and checked over out of sight (and explosion radius) of the main gate.

3. Fix the gate's guard tower.
a) It should project out past the line of the city wall, so the guard can see (and shoot) along the wall and across the gate/entry.

b). It should have a guardhouse on top of the tower, with a roof, and peep-holes the guard can close. Right now, the guard is visible from the waist up, and silhouetted against the sky behind her. Fix that!

c). There should be a 2nd raised platform inside the tower, about 10 ft off the ground, with shooting holes that a 2nd shooter could open to increase the firepower in a siege.

c). While you're at it, a whole new 2nd guard tower, on the left-hand side is the gate, that would be manned during a siege.

I'm going to assume that because you are bed ridden you are heavily sedated....It's a tv show and who really questions the logistics of a horror/drama show? It's entertainment so let's just leave it at that..

posted on Oct, 6 2016 @ 11:27 AM
link
a reply to: redempsh
I like your ideas there, I would agree with you. hopefully if something happens there will be people likewise minded as you, around me.

i have an uncle lives about a 45 min drive from where i live, he is a total survivalist freak, he has stockpiled food,arms/water to last him a very long time. he has been telling all the family for years, in a shtf scenario everyone come out to his place lol. his house sits on top of a small hill, can see in every direction for couple miles. if zombie apocalypse ever happened he says he could pick em off from long range before anything could get near the house.

Can I just take a moment to say that I absolutely love the fact you are waxing logistics about zombie fiction?

No sarcasm. This thread made me happy.

The show makes me angry sometimes. Because like you point out. The people are dumb.

They've been in this for 7 years now. And they act like a bunch of dumb asses.

Sure let's have a loud ass argument in the middle of the woods while there's enemies about.

Let's let down our guard because zombies don't pop out of nowhere to eat you.

Agreed it's fun! I like Woodbury's defense. Always confused me why they didn't just take Woodbury after the prison was attacked the second time.

posted on Oct, 6 2016 @ 12:10 PM
link
I think there would be a lot more groups like terminus in this hypothetical situation too. Cannibalism would be rampant. How many of you would actually eat another person in a survival scenario?

Agreed it's fun! I like Woodbury's defense. Always confused me why they didn't just take Woodbury after the prison was attacked the second time.


Ultimately, I think the prison was the best place, if not for the living asshats who attacked them. The only thing I would have done is hang fabrics on all the fencing about 10 feet high to obscure the gardening and yard work from the zombies.

If it were me though, I would make it my life goal to find an offshore oil thingie and stock it with fishing nets. If there's such a thing as one of those with oil refinement attached, then water purification and electricity could last you centuries. No way a zombie is going to reach you there and it would be difficult for the living to do so without giving themselves away long before they reach you.

Yep oil thingy in the water would be excellent. Might come in handy having a mechanic or engineer in the group for maintenance.

Yep oil thingy in the water would be excellent. Might come in handy having a mechanic or engineer in the group for maintenance. 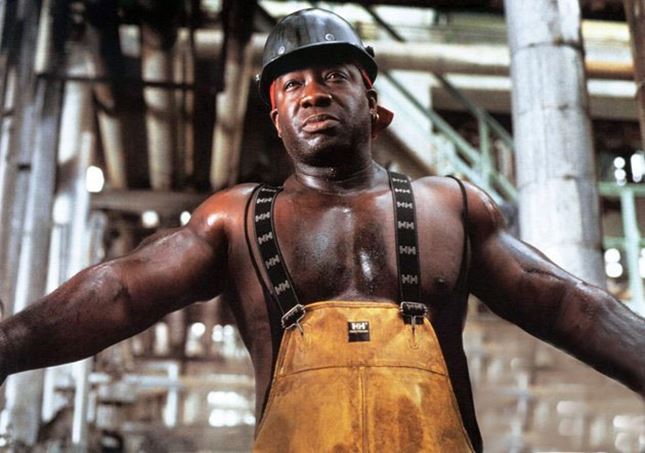 
I just hope the place comes stocked with a whole lot of instruction books.

I'd take Michael Clark Duncan over Rick any day lol. Tried pulling up a pic of oil rig Ben Affleck...realized he didn't have the same effect.

posted on Oct, 6 2016 @ 01:10 PM
link
What got me about Alexandria was when they were surrounded by the zombies and trying to reinforce the walls so they don't break through. Cut down some of those small trees inside, make them into sharp poles, build somewhere to sit along the walls at the top, and just stab zombie heads until it's a big pile of dead zombies outside. Zombies gone. Done. That being said I love the show!

They have electricity! So go to a consumer electronics store and get some security cameras with microphones and a couple of miles of coaxial cable.

Lets say they could get 6 cameras working....

CAMERA 1: up the road beyond the main gate, about a mile; wherever attackers would park their cars and assemble prior to battle.

CAMERA 2: In the guard tower of the main gate. So the guard can call for help without leaving her post.

CAMERA 3: In the Armory. More snap gets started where the guns are stored than anywhere else. It'd be good to have a camera on that room, so you'd know whose betraying you this week.

CAMERA 4: At the main intersection, looking away from the gate. If someone is performing a "Trojan Horse," you'll see ninjas running up to open the gate.

CAMERA 5: In the Jail cell