posted on Oct, 4 2016 @ 01:33 PM
link
I'm not sure how many people are familiar with this, but there's a video of a beer vendor robbery here in Canada (in the town Russell, Manitoba) that went viral on the internet. The culprits ran off with a few cases of beer.... one of them wearing hockey gear as their disguise.


It was pegged as the "Most Canadian Heist" and reported by CBC news back in August.

It would be a scene from a clichéd Canadian movie — if it wasn't so bizarrely real.

RCMP in Manitoba have posted a YouTube video of two men, one of whom is dressed in beer-league goalie equipment, who smashed their way into a vendor and made off with cases of brewskies.

Here's the video of the break-in:


So anyhoo, one of the townsfolk in Russell, Manitoba decided to make a parody of the heist as his Halloween lawn decoration this year for the town's annual Scarecrow Contest: 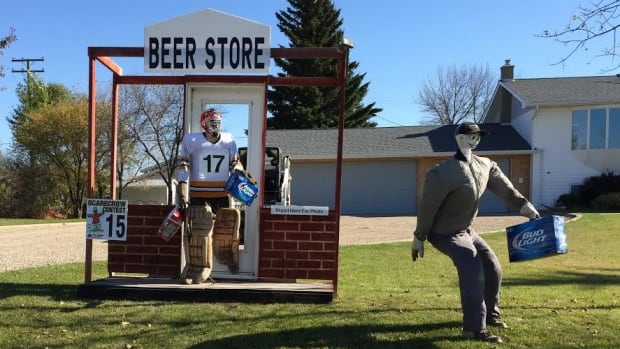 Asked why he chose that as his theme, Stanchuk said it features two of his favourite things.

"I played hockey as a goalie and I drank lots of beer," he said. "Actually, it's put our little town on the map, that crime. It wasn't a good crime but it was a classic — hockey and beer. Not too many criminals run around in hockey equipment.

"Our little town got so much exposure over it that it was sort of cool."


Apparently there has been lots of people going up to the display on his lawn and taking selfies:

The display is on a fairly busy street in town and has proven popular with passersby, so Stanchuk added a sign under a window frame next to the beer store door: "Stand here for a photo."

"Last night at 8:30, in the dark, there was still people taking pictures with it," he said with a chuckle.

Needless to say, the two beer-guzzling hockey-playing thieves have yet to be caught:

However, should he win, Stanchuk is willing to offer some compensation to the guys who inspired the creation. But there is a catch.

"The guys, if they turn themselves in, I'll buy them a case of beer," he said.

My crazy Canuckian countrymen and their sense of humour never ceases to make me chuckle from time to time.

When the RCMP posted this video on youtube, something tells me the 'boys in blue' were laughing their arses off watching this as they were trying to solve the case.

Odd, I live in Manitoba and have never even heard of this.
Crazy Nuckers!

Couple of two-fours and on your way.

Odd, I live in Manitoba and have never even heard of this.
Crazy Nuckers!

Well geez girl, you gotta crawl out from under that 'toba rock !

I crawl out from under my 'toba rock at least once a week to get some fresh air and pick off the fleas.

Admittedly, as an introvert I like living under my rock (sans fleas).
I found it odd though cause I watch our news almost every day but never heard of this story.

At any rate it was a funny one and thanks again for sharing.

posted on Oct, 4 2016 @ 10:16 PM
link
Thanks for posting and this is a riot except for the broken glass. Not only is it expensive to replace but it makes a big mess. This is an absolute riot but I don't recommend it here in the lower 48. To many of us have guns and just might shoot and then there's the matter of our trigger happy police. They would miss at least once and spoil some good brew. Great post and my best,