MetroCare Home Services and T&M Protection Service, what do they have in common?

Don't forget the connection w/Marvin Bush to "Securacom" and see how many of the buildings in 9/11 that went 'down' were also 'connected' :


Sixty-two year old Bertha Champagne, described as a long time "baby sitter" for Marvin and Margaret Bush's two children, son Walker, 13, and daughter Marshall, 17, was found crushed to death by her own vehicle in a driveway in front of the Bush family home in the Alexandria section of Fairfax County. Champagne reportedly lived at the Bush family home.

Champagne had left the residence to retrieve something from her car, which police say had somehow been left in gear. According to the police report, the car rolled forward and pinned the woman between it and a small building next to the driveway (possibly a checkpoint built by the Secret Service when Marvin's father, George H. W. Bush, was president). The car crossed Edgehill Drive, a small street in front of the Bush compound. The vehicle then crossed a busy two-lane street, Fort Hunt Road, finally coming to rest in a wooded area across the street that adjoins the prestigious Belle Haven Country Club. No explanations have been offered as to why the vehicle did not move until Champagne was in a position to be crushed.

Definitely take the time to read it when you can. You won't be sorry. Mena & BCCI come up, too.

ETA: I finally finished reading it. There is a lot of good info within. Clearly the author is very adept and spotting super-important connections...and understanding them. But like most of us, I felt he was lacking in putting the whole story together.

He created a beautiful outline of events that raised a lot of questions...but other events that I also think are related were missed. That said, I think it's purely due to the volume of info there is to connect and all the tentacles.

None-the-less, he put together something that I had not put together before: The Mena drug smuggling operation didn't die because Barry Seal was killed and the Mena operation was so close to be completely exposed....

....The operations moved to Florida (and a few other places). But that Florida airport was operated by a former CIA agent and that's where some of the 9/11 hijackers trained. Governor Jeb Bush, I am sure, served much the same obstructionist role that Governor Bill Clinton did.

Anyway, it was interesting to find there is more reason to wonder about the 1993 WTC bombing and all the other things that helped set the stage for the official 9/11 story.

And to have the new puzzle of private security firms added to the mystery of many events...that's very much new to my mind.

BTW, I tried to watch the documentary -- it was way too artsy for info that needs to be taken seriously. I suggest sticking with the essay.
edit on 5-10-2016 by MotherMayEye because: (no reason given)

SANTA ANA, California (Jan. 2, 2013) - Universal Protection Service, a division of Universal Services of America and one of the largest providers of security services in the U.S., is excited to announce that they have acquired the security officer services division of T&M Protection Resources, LLC (T&M).

The ultra-rich bankers, hedge fund managers and private equity executives of New York City have long enlisted private security firms to help safeguard them and their wealth. But as the mood on Main Street turns increasingly hostile, New York’s financial titans are cranking their security measures up to 11. For the high-end security firms that provide the moneyed elite with specialty services like around-the-clock bodyguards and elaborate home security systems, Occupy Wall Street has been a stimulus package all its own.

“Now, instead of having a retired cop sitting in the garage on Maiden Lane, you have a whole command center at your disposal,” said Robert S. Tucker, the chief executive of T.& M. Protection.

And here is the command center: 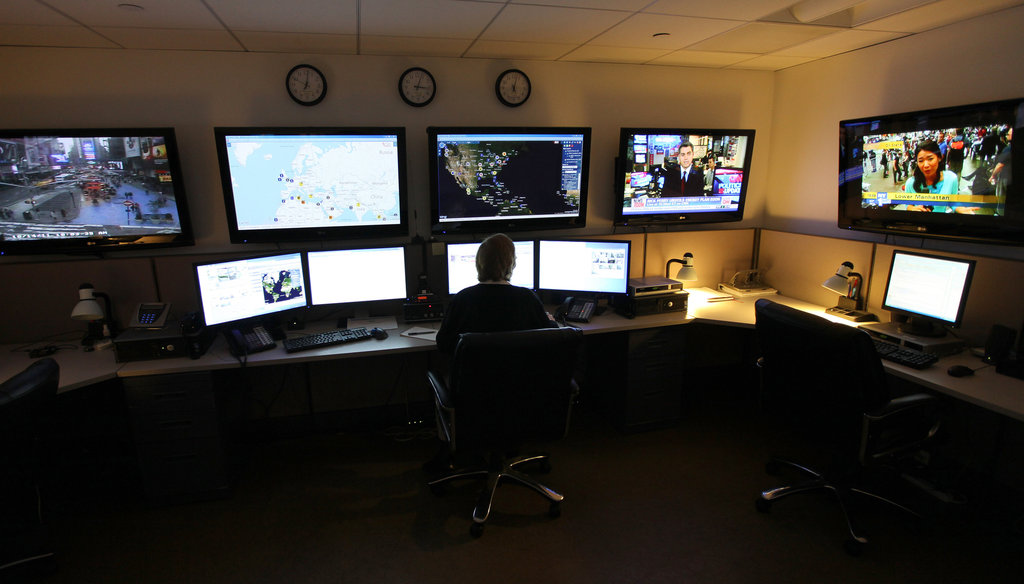 It would seem to me that if these individuals weren't involved in business dealing that resulted in major hardship if not death for those on the short end of the stick, then such measures wouldn't be necessary. As it is, the trend is for more and more general distrust of "the gilded class" and that class is well aware of the dangers in which they find themselves.

posted on Oct, 8 2016 @ 12:34 AM
link
This is some really top notch good investigation. It's very hard to piece together what the agenda of it all is though.