Proof that evolution is the only answer

The problem is that they don't even understand that they are being made fools of. 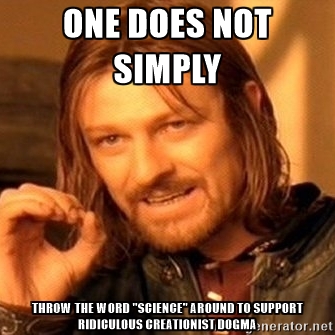 Sure you do, but it has to have a prefix.... pseudo I've spent the better part of 20 years (actually what date is it .... ahh 22 years, damn) dealing with these numpties. I was a teaching fellow in an honors level (that is 4th year in the Commonwealth system of universities) chemistry paper on Proteogenesis. We had a kid who was doing his masters, and he spent the entire class arguing with me, until his classmates cornered him, and reminded him he was not the only student. His reason for arguing? Well you will have guessed .... he was a Pentecostal, missionary speaking, born again Christian. That is his reason. He was also doing this in the paper on the "evolution" of the solar system. I believe he never worked in Chemistry, and ended up in a ministry somewhere?

The only Monks involved in chemistry that I respect.

Eh bioprocessing is cheating Says the Synthetic Chemist Mind you I prefer spirits, made by Scotsmen on Islay.... distiallation is an honorable profession.


It's funny how people think they are so clever but don't even know what they are saying, are so ignorant of the truth

Brewed by Monks drank by every Scottish alcoholic.

If I were to go Irish it would be this. Mind you I'd need to empty bottles to think like a creationist

its not just Raggedyman who does this however. Its even those who pretend to be "sitting on the fence". I've noticed the tactic of late (here and else where) of seeming open minded but ending up with "but why" and "how can you prove that" and it degenerating into "I posted the proof, go read it" followed by "Explain it to me" etc etc etc

originally posted by: AshFan
a reply to: Phantom423

The problem is that they don't even understand that they are being made fools of.

Well I don't do it to make fools out of them as much as try to get an idea across. It's not only about evolution and the science, it's about them buying into a fraud hook, line and sinker. There's a lot of money involved in the Creationist fraud. It's more about defrauding the ignorant to get the "donations". Follow the money......

Yeah a thread a few weeks back was just like that.
Started asking questions but within a few posts it was obvious his mind was made up about evolution.

See I have a problem with Creationism. If it truely is their heart felt spiritual belief that the earth is 6000 years old (if young earth). Then well it only harms them (and any family the force it on) on an intellectual level. Its when you get states either banning the word (or content) of evolution from education OR making a pseudoscience be taught beside it. I get uppity. I mean why not homeopathy in Chemistry classes then? Or Dowsing in Physics?

I think a lot of the posters here, are zealous followers of the leaders, and feel they are doing good. So I post, as a counterpoint, because someone might truely just be looking for information. One person turned away is a victory.

It is how they go. I've been at this too often in this forum. Seldom is there an open minded seeker looking for clarification (mmm butter).

Evolution is not about belief, it is about the evidence. I mean do creationists decide that Gravitation is not real, and suddenly fly? Because damn we have less concrete evidence for that than evolution

originally posted by: Noinden
a reply to: Phantom423

See I have a problem with Creationism. If it truely is their heart felt spiritual belief that the earth is 6000 years old (if young earth). Then well it only harms them (and any family the force it on) on an intellectual level. Its when you get states either banning the word (or content) of evolution from education OR making a pseudoscience be taught beside it. I get uppity. I mean why not homeopathy in Chemistry classes then? Or Dowsing in Physics?

I think a lot of the posters here, are zealous followers of the leaders, and feel they are doing good. So I post, as a counterpoint, because someone might truely just be looking for information. One person turned away is a victory.

When you read the crap at their website, it's fairly easy to see how they mask their deception. Take this article for example:

Evidence for Creation › Evidence for Truth › Natural Laws › Science Tests Subjective Experience against Absolute Truth › Historical Science Is Based on Assumptions In order for an opinion about something to be credible, it must adequately explain the existing evidence. This is especially true for ideas about the long ago past. Let's keep in mind that no one saw the origin's events; there are no living eyewitnesses. (Actually, there is an Eyewitness, and He wrote a Book about it, but this Testimony has been ruled inadmissible by opponents of His view.) We must try as honestly as we can to reconstruct the past by studying the evidence in the present, the results of past events. We can look at living organisms and see that they are incredibly complex, with well-designed, interdependent parts, each aspect far beyond our own human ability to understand fully, let alone duplicate. Each living thing is governed and energized by the information-loaded DNA molecule, consisting of myriads of genes and proteins, subcomponents of exquisite precision, each doing its job and each depending on the other to do its job. Evolutionists say it all happened in a step-by-step sequence by a totally random process. Creationists say it was designed. Evolutionists point to certain perceived flaws in the design, such as the panda's thumb or the location of the optic nerve, and use this as evidence for randomness. Creationists insist on the overall proper nature of each design, with any difficulties attributed to deterioration in the original "perfect" design. Never has a truly beneficial mutation been observed, a random alteration of the genome which produces a new and better gene. Creation teaches that there shouldn't be, evolutionists assure us there have been billions and billions, and they're still looking for an example. Needed is new and more information in the DNA information code, but all science can show is that over time information is lost in such a system. Creationists point to the never-violated Second Law of Thermodynamics—the scientific law of increasing disorder—while evolutionists point to certain chemical reactions which produce order locally, but which hardly apply to ameba-to-man evolution. Spontaneous generation has long ago been disproved, but evolutionists say it happened at least once. The fossil record is replete with"gaps"—no organisms bridging the span between basic categories have ever been found. Creationists say such organisms never existed, and there shouldn't be any transitional fossils. Evolutionists explain this lack away by punctuated equilibrium and hope to find them someday. Evolutionists spend great effort to propose mathematical models for the Big Bang. The evidence consists of varied points of light that don't move, that change only when they destroy themselves. Never do we see stars evolving from gas. Evolutionists, in order to save their mathematical models, propose imaginary cold, dark matter comprising 90% of the mass of the universe. The search for black holes continues. Millions are spent in a vain attempt to find extraterrestrial life for which there is no clue. But the evidence can much more easily be understood within the context of a created universe, with each star differing from the other. Neither view can be proved in an absolute sense. But of the two competing historical views, creation is far more credible. *Dr. John Morris is the President of ICR. Cite this article: John D. Morris, Ph.D. 1995. Is Creation or Evolution More Empirical?. Acts & Facts. 24

It's not a coincidence that you occasionally see some of the same language here in certain posts. It's a copy-cat game but the joke is on the followers. Even the writing style is poor. The head gurus at ICR are not rocket scientists and they're not religious. They're scammers - pure and simple. Pass the donation plate please...... 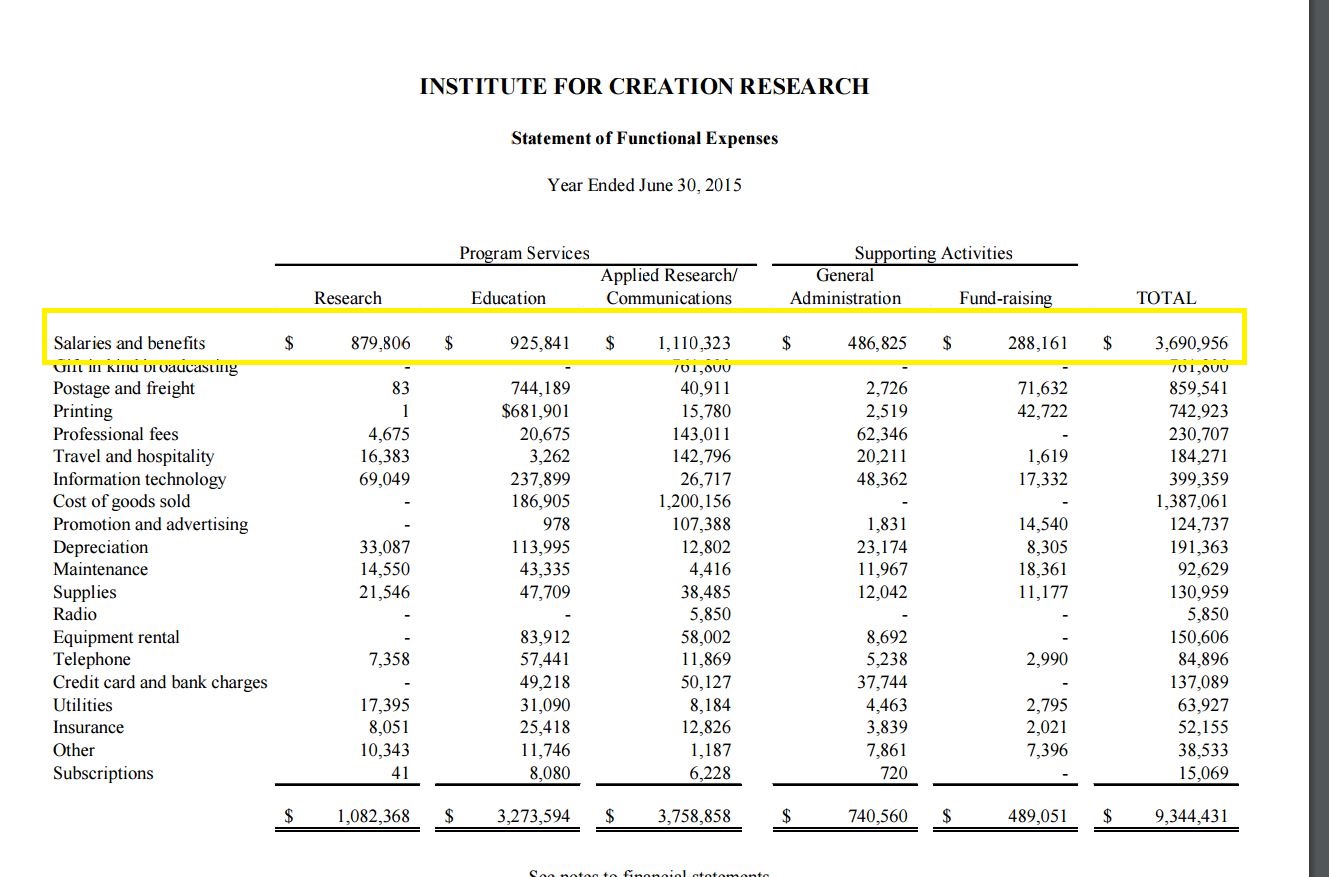 Paid for by sales of junk bonds and donations. What a business model!

I always put their posts through a plagarism program, it lets me see the limit of their reading. Not that they will change their minds, but its good to show them I know where they come from