posted on Oct, 4 2016 @ 02:23 AM
link
The whole Epstein murky situation was never investigated as it should have been,and I guess that's due to the people named in his little black book

Seriously what would Clinton and Trump do if this is true?

Perhaps the two main candidates for this important election have a foreign intelligence group directing their term in office?

If that is true then American interests would come 2nd

Get a lawyer, depose your witnesses and file a lawsuit against somebody running for President of the United States and I'll create a thread about it.

So you're saying that you don't think there's any truth to the allegations? Donald Trump like many other oligarchs has a known history with Jeffrey Epstein. In fact, Jeffrey Epstein should be a much bigger topic of conversation around here considering the fact that he's a nexus of oligarchs.


If I believe Hollywood, then everyone who is wealthy has done despicable things. I am just an average American trying to pay off my house, raise my daughter, and live long enough to enjoy retirement. I don't have the time or the energy to worry about what some billionaires are doing. Do you?

So as a person with a daughter, you don't find it a bit alarming that your choice for president is accused of fiddling/raping young girls?

I can assure you that the name Jeffrey Epstein will be spoken by neither of the candidate's campaigns.

So this is being posted on multiple times.

You can tell when the talking points get released by the 'Correct the Record' folks because the Hillary trolls trip over themselves to be the first to carry out the orders of their zombie queen.

even if Trump did bring up the Epstein/Clinton connection it probably would not get much traction. No one wants to hear about what Bill Clinton did. However it is still quite relevant what Hillary did to silence Bills accusers....now that IS relevant and always will be as long as she seeks public service.

as far as Trump and Epstein......aside from this lawsuit is there ANY evidence at all linking Trump to Epstein as being friends, hanging out, etc? In order for this suit to establish credibility it seems reasonable that it should establish an ongoing relationship/friendship between Trump and Epstein. If Trump very rarely or never appeared with Epstein in public it lowers the threshhold of believability.

on the other hand, we KNOW Bill Clinton was with Epstein more than TWO DOZEN times having escaped his secret service detail......and THAT is damning evidence of some very likely illegal activity knowing what Epstein is into.


do i think its POSSIBLE Trump did this? Of course! Of all the people likely to engage in horrible activity the super rich are among the most likely because they have the ability to make anything they want happen!!! Can you imagine living in THAT reality???


But...without more than a lawsuit the most reasonable position to take right now is wait and see and without further proof to assume he is INNOCENT UNTIL PROVEN GUILTY.

I wouldn't be surprised if this was true. Considering the original complaint was filed in the 94-95 school year. Donald has demonstrated many times he views women as sexual objects. Just looking at his campaign spinsters, all of them are attractive women!

Rich celebrities have been caught being sexual deviants years after the fact. Money has a tendency to make them think they're invincible and above the law! Just look at Jared Fogle as an example! Both Trump and Hillary have a lot of skeletons in their closet and they both have one thing in common, MONEY!

posted on Oct, 4 2016 @ 07:16 AM
link
Hmmm, I completely forgot about this. Now I really really hope he becomes POTUS.
A child rapist leading the 'greatest nation on earth'.

On a side note - I hate Hillary with a fiery passion. There is no answer to this election, so I'm hoping Trump gets it because he won't be such a good 'under-the-rug' sweeper as Hillary would be. I wanna know about the mistakes!

Thanks for posting this. I wasn't aware of the recent happenings in this case, but I'm still hoping the truth comes to light.

Here's what Trump said about Epstein...

‘I’ve known Jeff for fifteen years. Terrific guy. He’s a lot of fun to be with. It is even said that he likes beautiful women as much as I do, and many of them are on the younger side. No doubt about it — Jeffrey enjoys his social life.’ 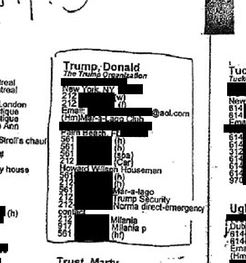 
Q: Have you ever had a personal relationship with Donald Trump?
A. What do you mean by "personal relationship," sir?
Q. Have you socialized with him?
A. Yes, sir.
Q. Yes?
A. Yes, sir.
Q. Have you ever socialized with Donald Trump in the presence of females under the age of 18?
A: Though I'd like to answer that question, at least today I'm going to have to assert my Fifth, Sixth, and 14th Amendment rights, sir.

. At least one of Epstein’s underage sex victims was recruited from Trump’s Mar-a-Lago — which he frequented often.

Virginia Roberts, an alleged victim of Epstein’s, "was recruited to perform a massage for Epstein while working as a $9-per-hour locker room attendant at Mar-A-Lago.”

posted on Oct, 4 2016 @ 10:12 AM
link
So do Democrats view this "allegation" any different than the dozens of women who have accused Slick Willie Clinton of rape? Or were those all made up, but this one against Trump has to be true.

Not a Democrat, but I do. All of Clinton's accusers were adults.
edit on 10/4/2016 by Benevolent Heretic because: (no reason given)

originally posted by: jjkenobi
So do Democrats view this "allegation" any different than the dozens of women who have accused Slick Willie Clinton of rape? Or were those all made up, but this one against Trump has to be true.

I personally don't give a crap. It doesn't have anything to do with Hillary's Candidacy.

i don't really see how this will change the case.

also the wording, "sexual contact " not that they are raping me. seems to me being 13 if she was talking/ confiding about it to someone, about being raped she would have used the word raped and not "sexual contact ". kids tend to use simple language. unless they are way more mature than the other kids or highly intelligent.

again not saying he did or didn't and not condoning her being there, but she willing admits to going to the parties for pay. you would have to be clueless even at 13 to not have a idea what was taking place during these parties. plus where were her parents / guardians during this time frame, someone made sure she went to school. how come someone didn't stop her from going to the parties.

posted on Oct, 4 2016 @ 11:00 AM
link
This exact same lawsuit has been filed twice, and dismissed twice. Now a "new" witness has magically appeared?

originally posted by: AndyFromMichigan
This exact same lawsuit has been filed twice, and dismissed twice. Now a "new" witness has magically appeared?

It was dismissed once because of a technical filing error and refiled. SHE dismissed the second case to start a new one with this new witness added.
edit on 10/4/2016 by Benevolent Heretic because: (no reason given)