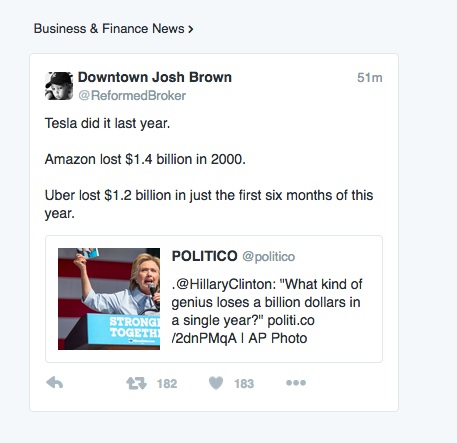 After seeing the above Tweet re "What kind of genius loses a billion dollars... " I wanted to check the figures presented in the response-tweet.

I didn't (yet) find Uber's info because it is a private company but I did find Tesla and Amazon, and Cabela's caught my eye. It is included because of today's announcement of a Bass Pro/Cabela's deal.

I have nothing against corporate success--I applaud it--but by the time I reached the publication linked last at the bottom, I realized we subsidize the growth of these companies while many get money from the feds and states to grow bigger. That's just how we roll. The Economics of Capitalism? At least for the most part it is in the public-eye.

10-K Filing As of December 31, 2013, we had approximately $1.13 billion of federal and $663.5 million of California operating loss carry-forwards available to offset future taxable income, $246.0 million of which is associated with windfall tax benefits that will be recorded as additional paid-in capital when realized.


Cabela’s Source: Good Jobs First
According to good jobs first, at least 20 communities have agreed to subsidize Cabela’s stores or distribution centers to the tune of more than $500 million.

-Of the $18 trillion in gross federal loan/bailout assistance awarded since 2000, 78 percent has gone to just a dozen large U.S. and foreign banks.

-Of the 50 largest recipients of federal loans, loan guarantees and bailout assistance, more than half (27) are foreign banks and financial services companies.


Tomorrow night I may dig deeper to connect the dots between Corporations named on the "$18 trillion in gross federal loan/bailout report" and campaign contributions.

originally posted by: JinMI
a reply to: kosmicjack

Using the law to your advantage is OK. I wonder if that particular tax loophole will be fixed any time soon.


He most likely took Advantage of many loopholes and they are legal to do. Rich people do that. They know how to create tax shelters, setting up holding companies and hiding all their funds, assets in those. They , or their accountants, know all the ways

His billion dollars might not even be lost. He's hidden that

originally posted by: kosmicjack
Who does? Either a liar or an idiot. Definitely not a "genius". Either it's not true and simply just a con (see 20 years of no taxes) or it is true and he isn't capable of good management.


originally posted by: JinMI
a reply to: kosmicjack

Using the law to your advantage is OK. I wonder if that particular tax loophole will be fixed any time soon.

It is not a "loop hole" anymore than taking a deduction for your mortgage interest.

Can you show where he broke any law, where the IRS faild to do so, after over a decade of audits?

I appreciate You taking the time to alert the masses about the "missing" $6B when She was Head of State (pun NOT intended, just irony in full display Slick Willy/Monica) Here are couple more links:

The deleted e-mail fart jokes was the actual 'diversion' and this is the prize. It isn't often that even the 'diversion' brings about a Snip Storm. Of course Her Acolytes, most of them paid actors, will defend Her to the end. Watch out for the Hill-bots. There was a thread where a page was copied and the Hill-Shills all typed the same, exact thing. Funny thing was, they all began w/the letter "A" .. What are the chances that 30+ people ALL typed the same thing and their first name all began w/the letter 'A'?

I'm thinking Mr. Drumpf acts like it is "free $$$" I'm also under the impression that Mr. Drumpf is broke again and "The Iron Bank" told Him He couldn't get a 7th bankruptcy so He turned to His "dear family friends" the Clinton Cabal™ and He'll drop out of the campaign to concentrate on His 'vast business ventures' w/an influx of cash from Billary's own slush fund The Clinton Fraudation™...

Otherwise, its like calling me out for going into 4x the amount of debt my parents did to buy a house, even though I bought mine 32 years later and with 6x as much annual income.

posted on Oct, 4 2016 @ 08:58 AM
link
$6B missing?. Only an idiot would still run with that story. Really dude.
No money was ever missing. Not a cent.
Paperwork was misfiled . That has been corrected. Breitbart alt right totally un-researched bullsnip.
Doesn't anyone have the ability to verify anything before that write it ?

He didn't do anything illegal he's just not the brilliant businessman that he claims.
Apparently my income for my business in 1996 was higher than Trumps. And I grew it. I never went bankrupt and sold it for a very nice profit in 2014.
Now my house is paid for I own my cars have money in the bank and I retired at 57. Hubby and I travel, eat out, have fun everyday.
That's success. Not failing and building and failing and building and ruining other people's lives in the process.

I ran a successful decorating company for 13 years then opened a brick and mortar store selling flooring and furnishings.
I never went bankrupt. I just grew slow.

Misfiled paperwork. There was never any missing money.
You're just passing on bad information you haven't really researched yourself aren't you?

originally posted by: lordcomac
She knows full well that he didn't lose it- she's simply pandering. Again. Because your average person doesn't know the difference.

Didn't she steal a few billion on the gooberment dime?

Also, didn't she use the exact same tax loophole?


He didn't lose it? Yes he did. The brilliant businessman crashed and burned his businesses due to poor management.
People lost jobs because of him.
He lost it. There it is on a tax return.
Or did he lie on his tax return?
Didn't Al Capone go to jail for that???

And no Hillary didn't steal any government (note the correct spelling of that word) money.

I appreciate your words. Some people work hard and get rich. Some people get things handed to them and get richer. If I spend my life thinking how unfair my life is, depression would be my only friend. live and let live. specifically to your point, no doubt we are very different people with very different backgrounds; that being said, I totally agree with your comment. it is not the aspect of making money that I have a difficulty with, its the fact that declaring losses and bankruptcies never happen in a vacuum. people, contractors, businesses, and local and federal gov'ts end up losing. I live in this country and my taxes do pay for the infrastructure and the way of life that I need to work and earn an income. a businessman who takes advantage of the system to not pay taxes because he had astronomical losses, is still a citizen who may have not done anything illegal. however, I do not want that person as president of my country.

So he's built his reputation on OPM?
Yeah that's right. Credit...other people's money...
Which he then lost again.... And had to rebuild again.
He's at that same desperate point once again but the courts won't let him file bankruptcy again.
He can't get the credit to rebuild it so he needs a conduit to a new venture. The alt right entertainment which I fully expect him to somehow steal from Steve Bannon in the year that follows his failed run for the white house.

And then he files this Y U G E loss the following year.
Wow true genius.
If genius now means total fraud and failure that is.

Funny how the rest of those casinos didn't fail though. Only his.
There are a few that are thirty five years old or older.
Resorts International Hotel and Casino opened in 1980 if I remember correctly.
The Claridge House has been there for longer than that although it was part of the old Atlantc City before gambling had been legalized.
Still they have operated a casino since it became legal.
Some hotels have come and gone due to changing trends. There was a Playboy club there back in the eighties when that kind of decadence was fashionable. It's changed to another hotel now.
Balleys has been there for thirty years.

IKR
Wish I'd gone there to gamble. That whole house advantage doesn't seem to have applied to that business.

So, just like the 'loan' from Trumps Dad that he paid back. What is the difference in how dad is used as long as the end result was your business.

As far as the 6B, sorry, it was not all found and documented. About 2B was found in the paperwork. Then there was the other 12B the US sent to Iraq with only 6B recovered. That was in 2004. What is shows is the corruption that is there now. 18 billion dollars and not even half is recovered or know where it went.