posted on Oct, 2 2016 @ 11:32 PM
link
First of all I don't like Pence that much, he is too conservative and seems like a bible beater BUT the guy sounds sensible and he is really smart as well has a good record. The guy is a good speaker and way smarter than Kaine, the best thing about him is that he does not condone ALL THINGS TRUMP like Kaine does Hillary.

Kaine is a weirdo, a liar like Hillary and I mean cmon, mr happy that waves like an 8 year old girl and is just goofy as all get out.

I look forward to seeing Pence destroy him. 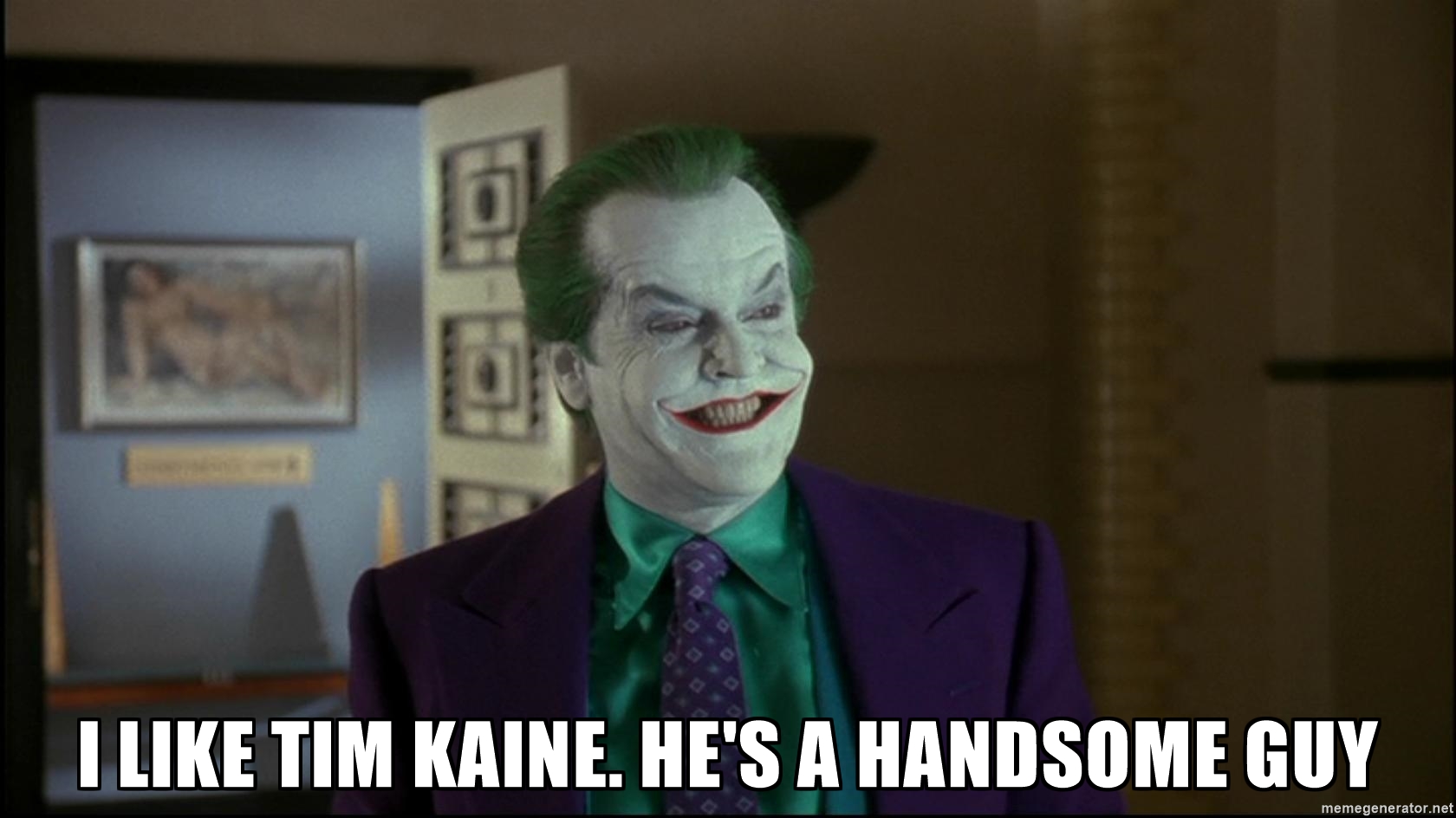 Tim Kaine is a Radical Communist Sympathizer , he embraced not some reconstituted, post-Marxist version, but the hardcore, Cold War variety — an avowed Marxist ideology inimical to the institutional Catholic Church and to the United States.

Mr. Pence Must Expose this Guy for the Fool that he is . Attack his Unamerican Political Ideology , and show the American People that he is nothing More than Hillary's Lap Dog .
edit on 3-10-2016 by Zanti Misfit because: spelling

posted on Oct, 3 2016 @ 12:18 AM
link
I live next to Indiana, where Mike Pence is governor. He's so low-keyed, you rarely hear his name on the news, and a lot of people in Indiana have no idea who he is, really.

That why I was happy and relieved to see Indiana governor Mike Pence deliver such a fiery and eloquent speech at the GOP convention.
REF: www.youtube.com...

He will do well at the V.P. debate. No doubt about it.

I can only pray you are right because one of them is likely to end up president.

originally posted by: RedMenace16
OP, wipe the side of your moth a bit, something white is running down your chin.


What is this moth you speak of? How can a moth have white stuff running down it? Or, did you mean to type mouth, but in your butthurt frenzy, foaming at the mouth, accidentally type the wrong word?

Can't wait to watch it!

In 1976, he graduated from Rockhurst High School, a Jesuit all-boys preparatory school in Kansas City, Missouri.[1][8] At Rockhurst, Kaine joined the debate team and was elected student body president.[2]

Kaine received his B.A. in economics from the University of Missouri in 1979, completing his degree in three years and graduating summa cum laude.[1][2] He was a Coro Foundation fellow in Kansas City in 1978.[9] He entered Harvard Law School in 1979, interrupting his law studies after his first year to work in Honduras[10][11][a] for nine months from 1980 to 1981, helping Jesuit missionaries who ran a Catholic school in El Progreso.[7][14] While running a vocational center that taught carpentry and welding, he also helped increase the school's enrollment by recruiting local villagers.[2] Kaine is fluent in Spanish as a result of his year in Honduras.[14]

he's the same age as I am. of all the crazy things that my generation did during those years, I would have to say spending nine months helping catholic missionaries run a catholic school just isn't the craziest of them!
there was a group from our church that went down into mexico to help build homes. they kind of came back with a different perspective also. it wasn't no specific brand of religion that they were exposed to that gave them that perspective but rather a level of poverty that is unknown in the states. so, I guess the short time that the group was in mexico must of made them vowed marxists also??

I don't feel any excitement for this debate. I don't know enough about either running mate to judge who I think will win. After Trumps piss poor debate performance I bet Pence has been doing lots of debate prep. It should be a snooze fess, then again it could be a zoo. Who cares, come on Hillary Vs Trump 2 lets see how long it takes Hillary to get under Trumps skin again

originally posted by: Krazysh0t
Lol. Does anyone even care about the outcome of this debate?

No. Whatever the outcome, both sides will claim victory.

However, I do hope Kaine is willing and able to highlight the facts that Pence is a perfect example of the Right Wing establishment.

Yea. There is unlikely to be a situation like last Monday's Presidential debate where there was a clear winner by a large margin. Both VPs are actual politicians and know how to conduct themselves in public speaking settings. So expect Tuesday to just reinforce people already decided's opinions.

Predicting an asskicking (from either side really) like the OP is doing is just laughable.
edit on 3-10-2016 by Krazysh0t because: (no reason given)

posted on Oct, 3 2016 @ 07:37 AM
link
Vice Presidents are normally chosen to deliver their own home states. So in this case Pence was chosen as it is believed, that he can help the GOP candidate get the votes from Indiana, and Kaine to get the votes for Virginia. That is usually one of the strategies that is employed, and to show that they are an asset to the campaign over all.

While I am not sure who will win this debate, however, the past conduct of a candidate will be brought up, and any and all scandals will be mentioned and the candidate will have to explain, taking time out of trying to make points, in explaining such. In Kaine’s position it was accepting gifts, close to 160,000 dollar’s worth.

Pence on the other hand, is coming in with a bigger millstone and that is a history of discriminating against one group of people in particular, including the disastrous law that left a big impact on the economy of Indiana, and his history of such right away.

Both are skilled politicians and how the act along with what is stated, should prove to be an interesting debate, as it will show many who they are, what their campaigns stand for and ultimately, will either boost or hinder the respective presidential campaigns in the upcoming election.

That being said there is a few other things that can also be stated:

The problem with Pence, is that he is there to deliver one state and try to get part of the electorate to vote for the GOP. But the problem with that is, that the GOP already has that section of the population voting for them. Overlap is fine, but I do not see Pence bringing something new to the table to bring in other demographics to the table to vote Republican.

Kaine on the other hand was a good choice for the Democrat for 2 reasons: 1) He could appeal to those in Virginia and down the Appalachian range to vote for the Democrats as well, which normally votes Republican, and 2) He can appeal directly to a growing population of voters in this country directly, the Hispanic vote.

When you look at the population breakdown, minorities, such as those of Hispanic descent, Asian and African American’s are quickly growing, and making a bigger portion of the voting population. Any candidate who wants to get elected to office, is going to have to try to get bigger percentages of those particular populations to agree and vote for them, if they want a fighting chance. And unfortunately the GOP party is once again showing it is exclusionary in nature and that could very well be its downfall.


If anything get out the popcorn and sit back, should be an interesting debate. We paid for it, might as well sit back and watch.

This makes it sound so much more dramatic than it is going to be, kinda like those dragster racing promos.

Come see the Midwest Mauler, Mike The Agony Dis-Pence-er versus the Virginia Violator, Tim House of Pain Kaine, in a showdown of two people voters gives less a crap about then the main candidates!!!! Insults will be hurled! Lies will be told! Nothing will be settled!

This makes it sound so much more dramatic than it is going to be, kinda like those dragster racing promos.

Come see the Midwest Mauler, Mike The Agony Dis-Pence-er versus the Virginia Violator, Tim House of Pain Kaine, in a showdown of two people voters gives less a crap about then the main candidates!!!! Insults will be hurled! Lies will be told! Nothing will be settled!

I think if you let your children watch this that protective services should take them away and put them in a nice safe Libertarian household.

I think if you let your children watch this that protective services should take them away and put them in a nice safe Libertarian household. 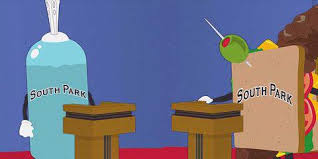