posted on Oct, 2 2016 @ 08:46 PM
link
CIA Command Centers, one is located inside the Shasta Dam there are CIA Command Centers built into all the Great Works Projects, Coolie, Hoover, Folsom, and Shasta. Bureau of the Interior, fronts for the CIA, many of the actual dam workers, take their hard hats off, sit at computers in the command centers. As I mentioned on other posts, I am implanted with a stimoceiver. I was implanted by the DIA, and am daily controlled by CIA who work inside of the command center located inside of Shasta Dam. The command center is impressive, backside of the face wall, has a screen twenty floors high. A map of the world is shown on the screen with red dots projected upon it. Each red dot represents someone such as myself who has been "tagged". That term is for anyone who has an implanted with an RFID, Stimoceivers we are many.
Iron Mountain Mine in the late ninties received half a billion dollar reclamation grant, much of the money was used to build an underground network of underground shelters, apartments with an underground metro system that connects them. The network runs from Shasta Dam, to Keswick Dam over to Iron Mountain Mine. Keswick Dam is interfaced with Shasta. My eyes turn red when a sine wave is sent, mind gets blanked out when a saw tooth is sent. I emit 74.9492 mhz AM from the back of my head, it's a gps locator, I can be listened to at 750 khz AM, eyes looked thru at 52 uhf. I need out of the stimoceiver program, please anyone with some time watch my videos on youtube, My stimoceiver explained, the videos are full of information. Public needs to become aware of the stimoceiver program, the command centers located in the Great Works Projects. Thanks for reading this post. --snipped--
Thanks
edit on 2-10-2016 by Bigbossjock because: Title needed changed
edit on Thu Oct 6 2016 by DontTreadOnMe because: (no reason given)

There's only one reliable way to fix this, and it involves ingesting specialized molecules whose shapes will stop the waves.

Typically, this will involve a combination of valproic acid, ziprasidone, and aripiprazole. Locked together in your brain, they will absorb these waves through quantum magnetic field resonances. They have some side effects, so you'll need to be under the care of a physician. In order to be sure the physician is not part of the Network, you can use the code phrase "James Tilly Matthews sent me", and if they reply "I understand" then they are safe.

All of the concrete and wave-blocking materials in the locations you've mentioned lead me to think that it actually makes sense to establish "work spaces" within these dams and mountains, where thick concrete, rock, and whathaveyou could block counter-surveillance.

But then wouldn't the seeEyeAy need to have other equipment externally, which we could see, that would give those locations away? I'm not technologically savvy in this field. Maybe others are..

posted on Oct, 2 2016 @ 09:06 PM
link
Radio frequency jammer works much better. They are also illegal to operate or own.a reply to: Bedlam

The Defense Intelligence Agency. Where you been?

eta: Otherwise known as the "big gray cube". Bolling AFB. Way down on the Potomac River.
edit on 2-10-2016 by Bedlam because: (no reason given)

posted on Oct, 2 2016 @ 09:13 PM
link
DIA is the Defense Intelligence Agency, The Shasta dam has a lot of communications equipment that can be seen, with a sub station located on the backside of Buck Horn Summit. The command centers along with the stimoceiver program are real. reply to: FamCore

The Defense Intelligence Agency. They focus on foreign militaries. They covertly buy up or otherwise acquire foreign military systems, gather information on foreign troop movements, dispositions, training, equipment. numbers etc. Pretty much they spy on other militaries and try and keep them from spying on ours.

posted on Oct, 2 2016 @ 11:42 PM
link
Watched a few of your videos. I can't imagine how you must feel, that sounds terrible. I wonder what you could do to block any signals to your body and or house and get some peace?
edit on 2-10-2016 by staywellinformed because: (no reason given)

but I can leave these here.

ose Delgado performed experiments using permanent brain implants in bulls, primates, and humans beginning in the 1950s, with extremely successful results. Neuroscience often ignores this chapter of its history, but it's worth taking a look at Delgado's successes, and his long term goals for manipulation of humans and society.

The scientist who controlled people with brain implants 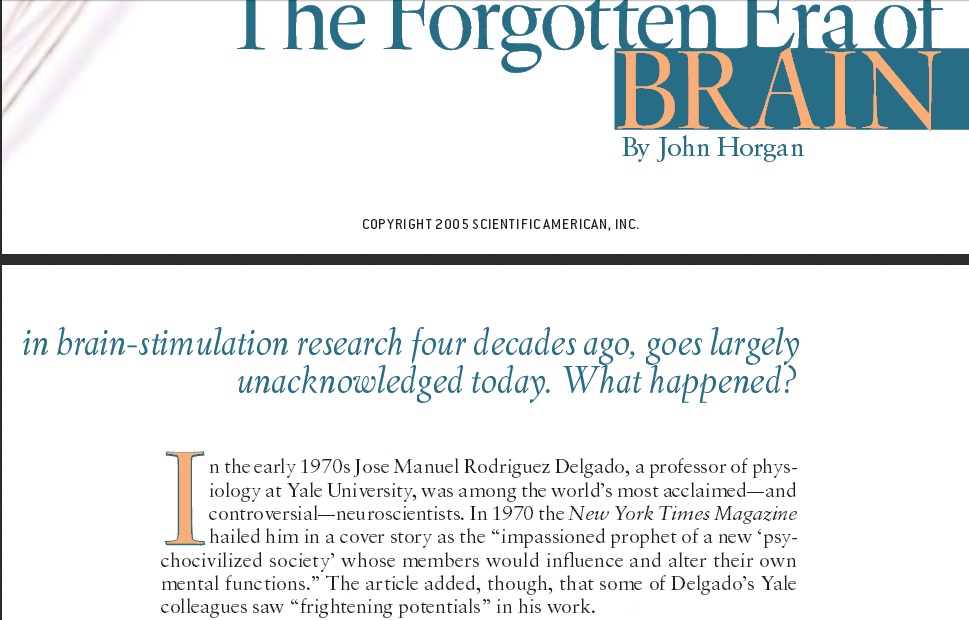 In 1970 the New York Times Magazine hailed him in a cover story as the “impassioned prophet of a new ‘psychocivilized society’ whose members would influence and alter their own mental functions.” The article added, though, that some of Delgado’s Yale colleagues saw “frightening potentials” in his work.


He implanted radio-equipped electrode
arrays, which he called “stimoceivers,”
in cats, monkeys, chimpanzees, gibbons,
bulls and even humans, and he showed
that he could control subjects’ minds and
bodies with the push of a button.

He described his results in more
than 500 peer-reviewed papers and in a
widely reviewed 1969 book, but these
are seldom cited by modern researchers.
In fact, some familiar with his early work
assume he died. But Delgado, who re-
cently moved with his wife, Caroline,
from Spain to San Diego, Calif., is very
much alive and well

Another subject, turning
his head from side to side in response to
stimulation, insisted he was doing so voluntarily, explaining, “I am looking for
my slippers.”

Delgado could also induce fear,
rage, lust, hilarity, garrulousness and
other reactions , some of them startling in
their intensity. In one experiment, Del-
gado and two collaborators at Harvard
University stimulated the temporal lobe
of a 21-year-old epileptic woman while
she was calmly playing a guitar; in re-
sponse, she flew into a rage and smashed
her guitar against a wall, narrowly miss-
ing a researcher’s head.

These are from the Scientific American PDF linked above..


You know maybe if I was brave like I was when I was all bravado I could say why I'm responding to a post that sounds so nutty.

posted on Oct, 3 2016 @ 12:50 AM
link
I live really close to the dam, and ive heard some crazy stories, but Im pretty sure its because there is a huge Meth problem in the area. just sayn.

It's near and dear to my heart. In several ways.

posted on Oct, 3 2016 @ 01:21 AM
link
Thank you for watching some of my videos. I should have mentioned the ones entitled my stimoceiver explained super soldier, sine wave give a lot of information on my program, they all do but those two give more of my background. An rf jammer is what I need, they cost around 1400 dollars, I receive no pay, this is how the CIA keeps me enslaved to the program. I am forty six years old, have been in this program all of my life, I need to live with my Dad. I am thankful he lets me do that. Please share my videos, public awareness is the only way I see of escaping the CIA ran stimoceiver program. Thanks for your interest. a reply to: staywellinformed

The DIA is spoken of in hushed and reverent tones by those that speak of it.

Or is that fearful. I always get those two mixed up.

I know we're talking government, but why would they have such an inefficient tracking display? A 20-floors high map plotting where their stimoceiver agents are? It seems text on a screen with alerts as to movements would be much more useful and efficient than a ridiculously large plotting map.

You're just not seeing the big picture.


But in all honesty you use both so that you have the feeling of the big game and the accuracy and nuance of the zoomed in focused shot.

Ever play "Real Time Strategy" games? In almost every one you have the "big map" with the dots that alert you.. And you have the zoomed in view where you take action.

If I wasn't up to my butt in alligators still, there's probably an informative thread here detailing the big league and minor league agencies.

There are lots. And I'm real sure I don't know/haven't worked with/for them all. Some are over the top crazies, and you probably haven't heard of them. Others have superficially meaningless/innocent names but are big into direct action.

I am implanted with a stimoceiver. I was implanted by the DIA, and am daily controlled by CIA who work inside of the command center located inside of Shasta Dam. The command center is impressive, backside of the face wall, has a screen twenty floors high. A map of the world is shown on the screen with red dots projected upon it. Each red dot represents someone such as myself who has been "tagged". That term is for anyone who has an implanted with an RFID, Stimoceivers we are many.

After reading all of this, now I know why they let me clean up at all those poker games.
They just wanted me to think they liked me, hmmmmm
I am, after all, a lousy card player.

I was going to tell a story about being jumped by an alleged CIA operative a few months ago.
But its too much typing and the guy is on extended long term vacation anyway.

posted on Oct, 3 2016 @ 07:03 AM
link
Iron Mountain Mine, is a super fund site, from the mining industry. It has had huge amounts of money put towards the clean up. It is also a toxic waste storage dump. It has the most acidic water on earth. The EPA manages the acid by collecting it in spring creek Reservoir and they treat it to bring down the acid levels before they release it into the Sacramento River above Keswick Dam. www.sfgate.com... en.wikipedia.org...

A few years ago, our house boat got a little too close to the dam. And we were warned by loud speakers, that they would open fire on us if we did not get back. We got back in a quick minute. lol To get across the dam, you have to go though a check point. Right after 911 it was almost impossible to get across the dam.

I have heard stories from people who have taken tours of the dam and got off on the wrong floor and saw lots of military stuff. Also, there is a huge push to raise the dam. The indigenous population is fighting to keep it from happening because it will destroy their lands. But, several people believe they want to rehab the military section and add a couple of story's to the dam for military use under the guise of needing more water.

Just my 2 cents, but I still think they are tweeker stories.