posted on Oct, 2 2016 @ 06:39 PM
link
I don't know exactly my journey through YouTube but I stumbled upon this German pop song by SXTN called 'Ich bin schwarz'. Ich bin schwarz translates directly into English as 'I am black'. English is a Germanic language so there can be no doubt here about the interpretation of the translation.

The video jumps right into the action as it portrays the most stereotyped Black man you can literally imagine, whilst on a visit to see his white German girlfriend at her parents house. Watch the video and I kid you not. He has weed bags tied in his hair, a condom hanging from a dred and a baby's pacifier from another, an ashy glass pipe in his hair, cannabis leaf socks, cannabis leaf boxer half way down his legs. 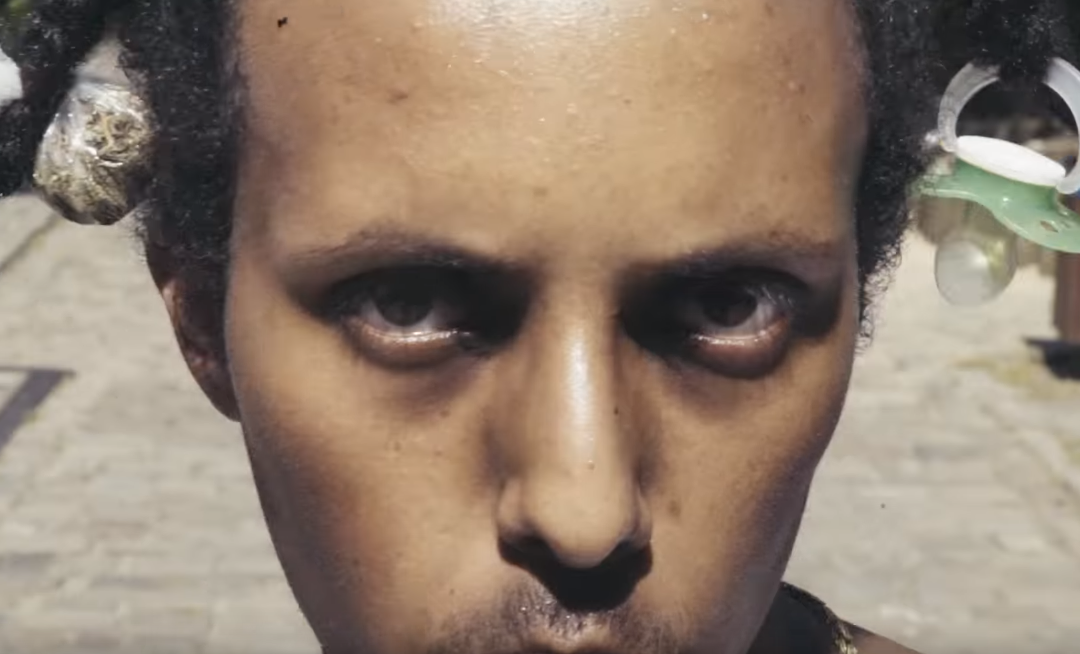 The girl's father answers the door. The dad is a normal looking white German man, somewhat tired in appearance. He is wearing a Germany national football team jersey. He seems suspicious. 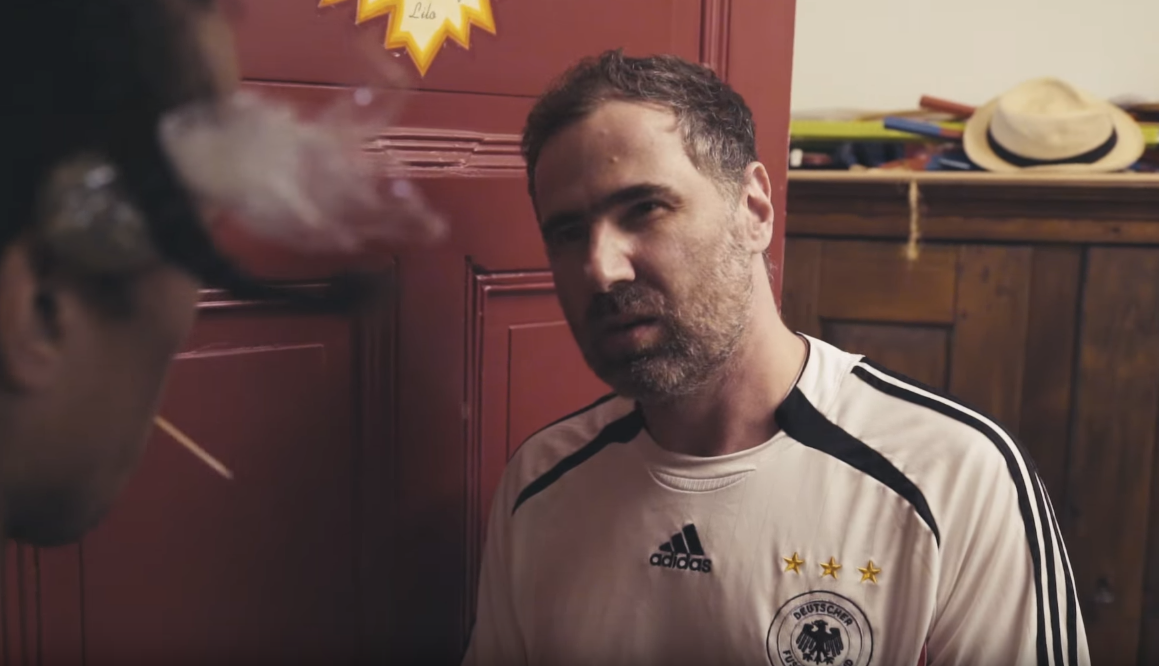 Next the Ayran daughter runs through to embrace her the boyfriend. 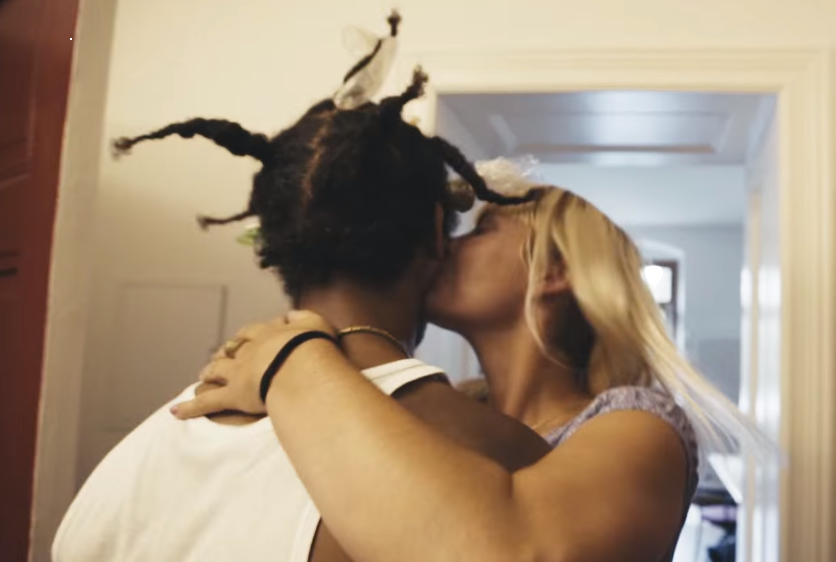 They sit at dinner where the mother is introduced. She is a quite normal looking white German as well. 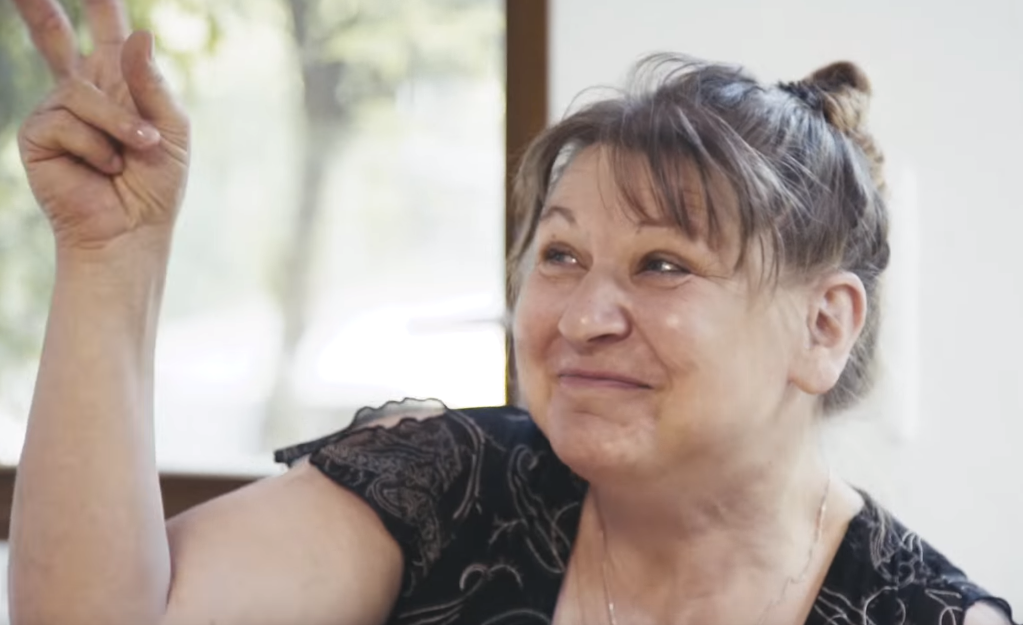 In numerology 13 is 'the number of upheaval so that new ground can be broken'. 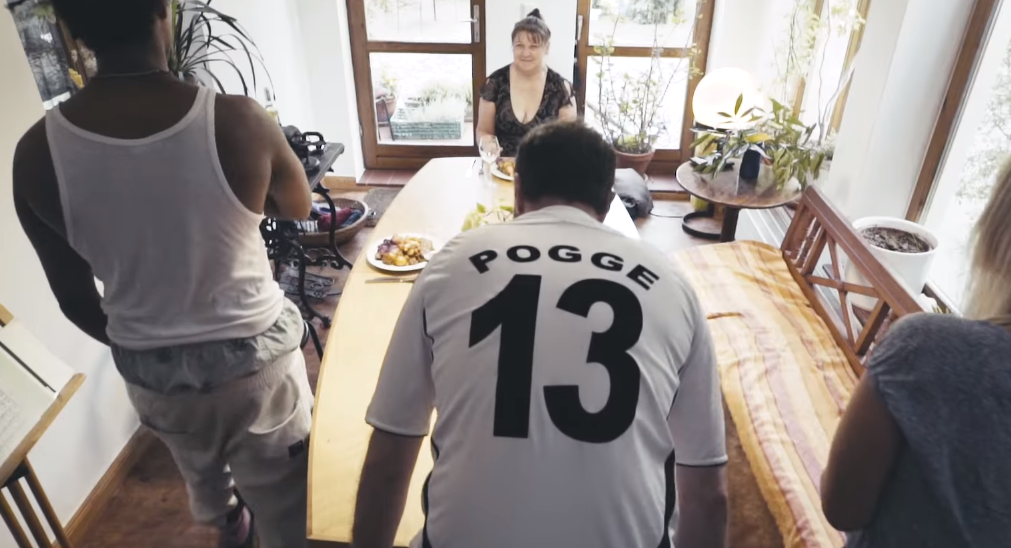 The black man brings his own hot sauce and puts a lot of it on his large pile of fried chicken. While the white parents try to clink wine glasses the black man is downing the bottle. He eats the chicken with his fingers like a savage. 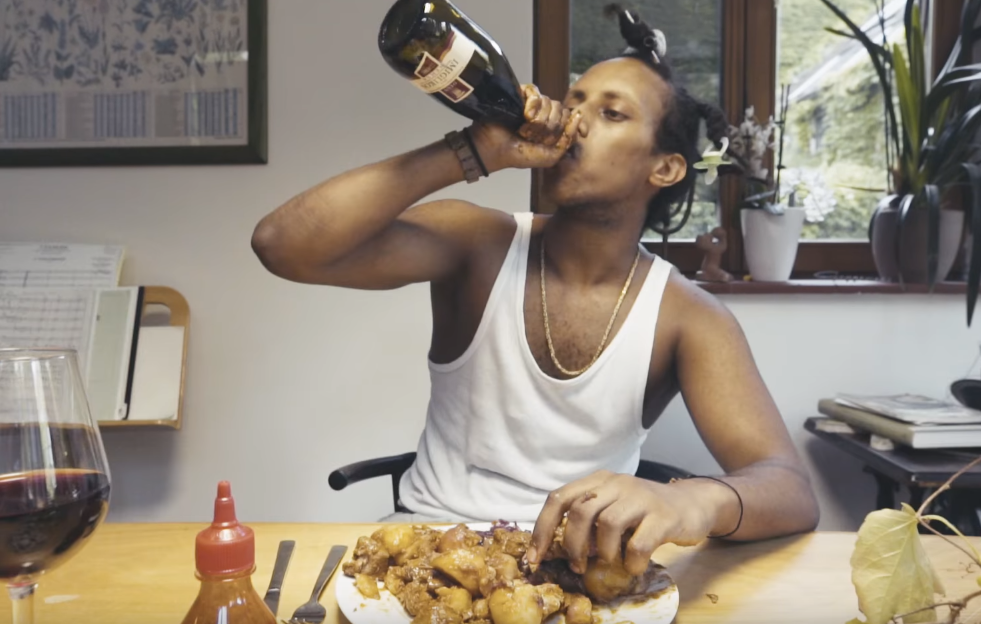 Then a whole load more black people turn up to party and surge through knocking the dad out of the way. They bring a watermelon and are eating it with their hands. It really gets worse from here but I am tired of stopping every few seconds to write down what other stereotype they are throwing at it.

Give us the video already right.


I don't know about you but as an outsider looking in it seems to me that race tensions in Germany are growing and that is being instigated by the elite. This open border immigration is INSANE. There absolutely must be an ulterior motive and it does not look good.

Here is the singer of the song in an interview. Look at the satanic symbolism on her hand. This is a priestess. 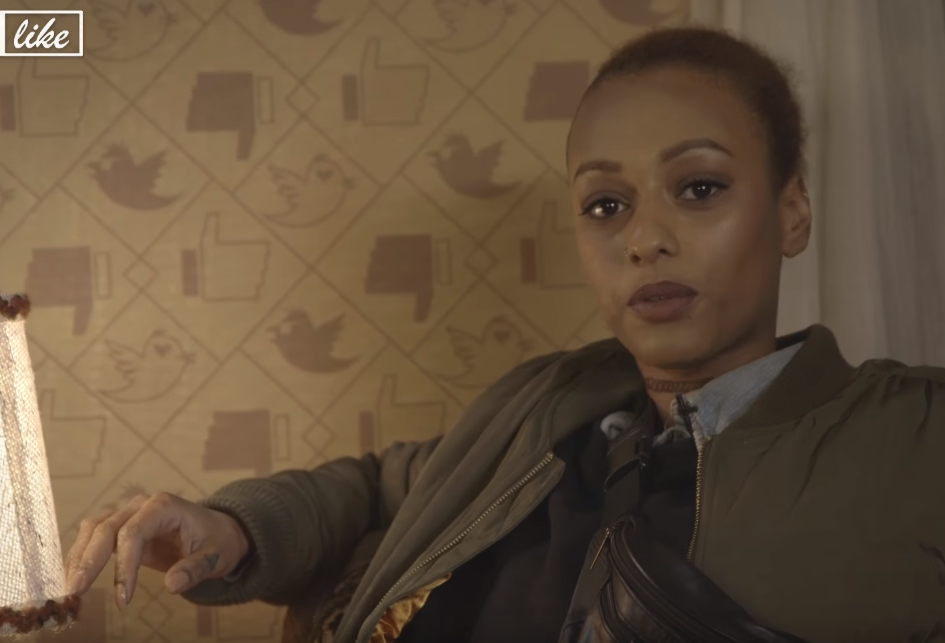 
. He eats the chicken with his fingers like a savage.

How do you eat fried chicken? With a knife and fork?
Fingers are the only implement needed for fried chicken.

originally posted by: cvsouth
The black man brings his own hot sauce and puts a lot of it on his large pile of fried chicken.

A certain white Presidential candidate has stated that she carries her own hot sauce around everywhere to douse her victuals so it cannot just be a black genetic predisposition.

That doesn't look like fried chicken to me. Unless 'fried chicken' in Germany means 'pile of mush'.

posted on Oct, 2 2016 @ 06:53 PM
link
It will only be a matter of time before the Germans vomit up this foreign ideology and culture. I hope it's soon.


At a formal dinner, the meat is removed from birds with a fork and a knife. No fingers are used.

This isn't something I do, depending on the social circle, I would be considered a savage as well.


I don't know about you but as an outsider looking in it seems to me that race tensions in Germany are growing and that is being instigated by the elite. This open border immigration is INSANE. There absolutely must be an ulterior motive and it does not look good.

Yeah... bags of weed attached to hair, eating chicken with fingers (who the heck doesn't ?!?) and inviting friends to the party must be sinister acts of evil.

What's wrong with all you people constantly nagging about our asylum politics? Why don't you help us (allegedly insane) Krauts to stop this War with Terror, which started the whole refugee issue in the first place?

I don't blame German people. My girlfriend is half German. I love Germany. I blame the globalists who are making the top level policy decisions.

TY. And you're spot on doing so, let's devide the devide & conquer schemes!

Am I missing something here? The lead singer appears to have some African ancestry. Seems like satire to me, do you know the lyrics?

ETA: didn't watch it as you seemed to describe enough to get the idea.
edit on 10/2/16 by Ksihkehe because: (no reason given)

Of course it is. It even says so in the disclaimer at the start.

The video is making fun of racist stereotypes...

it doesn't work if you actually have racist stereotypes though.

originally posted by: PublicOpinion
What's wrong with all you people constantly nagging about our asylum politics? Why don't you help us (allegedly insane) Krauts to stop this War with Terror, which started the whole refugee issue in the first place?


Excellent point.
As badly organised as the current asylum policies are... there would be no need for any of it - if it wasn't for the Wolfowitz-Doktrin and the Pax Americana (and it's wars of terror) - and the political ignorance of the U.S.-American electorate, who are the ultimate political body responsible.
edit on 2-10-2016 by ColCurious because: (no reason given)

SXTN is a Berlin Rap Group by two female singers, both of them german with an african/arab background. (yes the 'priestess' mentionend in the OP is one of the rappers).

They live in Kreuzberg, the most multicultural part of Berlin.
They are known to make fun of the macho culture in so called gangster rap.

All their videos are provocative and ironic towards the "gangster rap culture".
Fun group, at the beginning of their career. It s their stick to act like male 'gangster' rap groups.

Personally i like some of their songs, but i guess they are too late in the game, since the whole gangster rap and even the ironic version is a bit over. But maybe i am just too old for it by now.

Anyway, if you want to listen to good german Hiphop, try the new 'Beginner' album...

It is.
I guess OP missed that one of the girls is an afro-german girl.
Sometimes it even should help if people understand the lyrics...

posted on Oct, 3 2016 @ 05:04 AM
link
The character in this music video is directly taken from the movie "Don't Be a Menace to South Central" by the Wayne's brothers. The character, Loc Dog, has baby pacifiers , sack of herbs, and condoms dangling off his hair.

Not sure if I'm allowed to link copy right movie clips, so just Google Don't be a Menace, or youtube;

All just seems like the typical parody of urban life in the hood. Why similar in the music video? Possibly extending the message of that lifestyle in Germany?

With the stereotypes like watermelon and chicken, Cocoa butter lotion, and the main characters image from the movie .... This music video just regurgitates youth being oblivious and uneducated to the history that created this negative lifestyle. IMO, a very sad joke.

Race tension is nothing new. History repeats itself, and we don't have many strong African leaders as in the past, which is allowing the elite and white privileged society to easily continue the bull crap.
edit on 3-10-2016 by SohTyTe because: Removal of words

Meanwhile our Muricans are distracted with a completely redundant election whilst the Brave New Oligarchy works on the destruction of Europe with chaos on it's outskirts, rising tensions at it's cores and full blown state of emergency actionism at the top.
Doing the same thing over and over again while expecting different results, definitions of madness with Einstein.

Thanks for the heads up though, stay frosty!