Humans have inherited their murderous tendencies 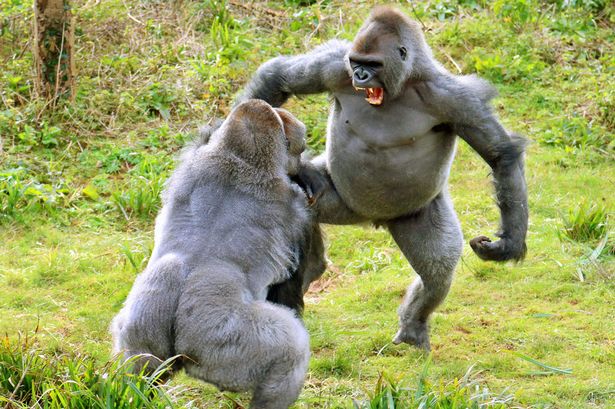 According to an article by Victoria Caprilles of Pulse Headlines website, a recent research study conducted by the University of Spain indicates that closely related species show similar tendencies in the capacity for violence/killing. The article also claims that civilization decreased murder rates. I found the information about Killer Whales having a murder rate nearly ZERO to be fascinating especially since they have such a scary name.


Researchers studied murder rates of more than one thousand mammal species and found out that closely related species show similar tendencies. Humans are “particularly violent” thanks to our evolutionary tree. The average murder rate for mammals is of three killings per every 1,000 deaths. Meanwhile, the average murder rate for early humans and the closer primates in the evolutionary tree was of twenty killings per every 1,000 deaths.


In the Medieval period, murder rates increased exponentially to 120 killings per every 1,000 deaths, reaching the pinnacle of the human capacity for violence.


Modern humans have a killing rate of thirteen killings per every 1,000 deaths, according to José María Gómez, lead author of the study. Researchers used data from the World Health Organization as a basis for their calculations. However, is more accurate to say that “violence has decreased significantly in the contemporary age” since many technical variables are affecting the exact numbers. Killer whales have a rate of murder of almost zero, and so do many species of anteaters and bats, concluded the research. Certain species of baboons, chinchillas, and lemur, have rates of more than one hundred killings per 1,000 deaths, making them way more violent than the modern human being.


Wow- I had no idea that fuzzy lovable chinchillas were so violent! Baboons, yes, they scare me- especially their teeth & strange bottoms.


The research was based on the theory of phylogenetics and the study of the evolutionary relationships and shared traits between related species. The closer the studied species were, the more similar their murder rates were, concluded the study. Scientists analyzed more than one thousand previous studies that referred to over one thousand different mammal species. They particularly investigated causes of death. Then, the researchers compared the number of fatalities related to murder. A superorder of species known as Euarchontogilires has a murder rate of about eleven killings per 1,000 deaths. Rodents, hares, and early humans are part of this order. The Euarchonta group, which includes primates, flying lemurs, and humans have a rate of twenty-three killings per 1,000 deaths. For great apes, the rate is eighteen killings per 1,000 death.


Euarchontogilires? One of our members is looking for a name for their baby-boy- I think this would be a great choice!
There is not much more in the article and their conclusion was that modern violence DEPENDS ON GOVERNMENT AND CULTURE! It is a shame that there is so much senseless killing including mass-shootings, terrorist acts, and human being's favorite hobby: WAR. I suppose these traits that we have inherited from our primate relatives were necessary to survive/evolve, but will we ever reach a point where we can break free from these tendencies? I hope so.
SOURCE ARTICLE
NATIONAL GEOGRAPHIC SOURCE ARTICLE
edit on 1022016 by seattlerat because: (no reason given)

Certain species of baboons, chinchillas, and lemur, have rates of more than one hundred killings per 1,000 deaths, making them way more violent than the modern human being.


I wonder how much environmental pressure has to do with it. Decreasing habitat, encroachment by humans, deforestation, over hunting like bush meat trade, for instance.

Land animals live under different circumstances than say Killer whales that have most of the earths surface to themselves. How much coastline filled with seal colones is there and how much competition for them exists? Sharks, maybe. Anyone else eating up all the seals? I know no-one is hunting Killer whales.

These are great points- environment has much to do with the rates, I'm sure. It used to be thought that praying mantis' would kill their mate after "the act", but it was later discovered that this held true only IN CAPTIVITY. There were also studies where mice trapped in a small environment became violent: How Mice Turned Thier Private Paradise Into A Terrifying Dystopia
edit on 1022016 by seattlerat because: (no reason given)

posted on Oct, 2 2016 @ 05:29 PM
link
You would expect much higher mortality rates due to murder, amongst society, but we still see the animals amongst us.

It used to be thought that praying mantis' would kill their mate after "the act", but it was later discovered that this held true only IN CAPTIVITY.


How enlightening, thanks for that factoid. The rat and mouse studies I am familiar with.

How could they possibly know the murder rates of our ancient ancestors?

I'm pretty sure they used a Chronovisor

It goes as far back as possible and you'll find its not always about murder but ownership.. Over land, food, clothing, housing etc.

Guess you could call it human nature, for us.