Anyone Have a Pet Raven- Or Crow?

posted on Oct, 2 2016 @ 01:47 PM
link
The above poster is exactly right. To legally own your pet, you would likeLying be looking at purchasing an African Pied Crow from a reputable breeder.

The prices can be quite steep, just like a parrot.

My son's fiancé's mother nurses and rescues injured birds and releases them back into the wild. My son calls her the bird lady, lol. Anyways, she and her husband were vacationing one week and she asked if I and my wife would stop by and feed her birds. My wife and I are animal lovers so we said sure, this would be fun! She told us she had a crow she's nursing and it always stays in the trees near her house. She told us to just walk out onto her deck and the crow will come over and eat right our of our hands!

Amazing, sure enough my wife and I walked out on her deck and this crow swoops down from know where and walks along the ledge of the deck and started taking food right out of our hand! Other than their loud "kawing," She says they're very intelligent and social birds.

posted on Oct, 2 2016 @ 03:30 PM
link
No ,but I LOVE crows! There was a special on crows, you know by ornithologist's, they are as smart as monkeys (smarter, I think). They don't just caw, caw, they have their own special language that they only speak to each other. Sometimes they sound like the creature in the movie "Predator". Don't mess with them, they know and recognize human faces, they will know that you are the human that lives at such and such house and if you EVER do something against a crow, they will tell the whole nation of crows that you are a bad human. They will repeatedly dive at you to show the rest of the crows that YOU are an a$$hole and should be avoided. They can create and use tools and if your hunting and watch them, they will show you where the game is, because the know that they'll be a nice, juicy gut pile to eat. AND Don Juan is a crow. (Carlos Castenada)

I have this report

I had a big black bird experience that was very interesting. I made a post about it somewhere else, so I'll copy it here 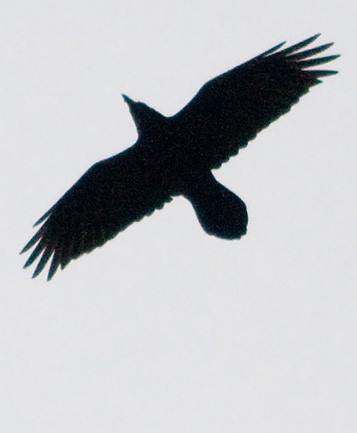 Today, Feb 29th, 2016, after a great day of work, when i went outside my office and paused to take in the air and the scene and listen to the sound of the spring birds twittering in the field of the evening dusk, i looked up and saw, with a certain admiration, a wonderful raven flying with outstretched wings and i thought "nice wingspan", but here's what it gets interesting. Presumably seeing me looking up at it with wide-eyed wonder, it suddenly closed it's wings tight around it's body and get this - it did a 360 degree barrel roll, right around, completely upside down and over, then made some strange noise that i presumed to be the raven version of a giggle as it recovered from the short dive and flew directly overhead and over the office building, as i shouted up at it - HEY!

It did it for fun, and to show off, as if to say "you think that's cool - watch THIS!" I've never seen anything like it. If i'd caught it on video it would have been an Internet sensation. Smart birds. Fun birds, sometimes.. I liked this particular one a lot. There was something almost Godly in the exchange. I'll never forget it. Just thought i'd share.