Weird sound from sky. Is it end times?


originally posted by: PhantomOrion
Do you live by train tracks, a train station, highway, or some sort of factory/refinery? We aren't far from one and tell you what we always hear strange sounds. At times I'm knocked out of my comfort zone, and left wondering if there is something going down, or if the sky is falling.


Not to call you out or anything, but if you live within Augusta city limits you're a stones throw from the one road (i-95) AND an airport. Airports are typically involved in local city snow removal, which the crews are currently preparing their gear for.

I can hear rain in the video, which can distort loud sounds.
Did you know that airplanes sound louder from the ground in the rain? The clouds are actually reflecting some of that sound back down to us.

Thought that they might have "got to him" when his channel got deleted.. don't know why that happens so often to people that post things that are interesting or obscure etc. on here or other websites, their channel mysteriously is deleted.

posted on Oct, 3 2016 @ 10:39 PM
link
I also heard strange sounds last night. I recorded them also. This is my very 1st post here, so I apologize if I'm not posting this correctly... I found this thread while looking for strange sounds heard in the sky last night...

originally posted by: speaker4thedead
I also heard strange sounds last night. I recorded them also. This is my very 1st post here, so I apologize if I'm not posting this correctly... I found this thread while looking for strange sounds heard in the sky last night...

That is what I noticed. It’s definitely not a train, the noises are exactly the same each time - that is to say, the wavelengths are virtually identical. At least that goes for the first noise, I can’t tell with the second bit because the genius talks over it and the third is much quieter.

Actually, here are the wavelengths for the first sound, all three instances. The noise of the rain has been filtered out of it so we end up with quite a steady sound (and picture). 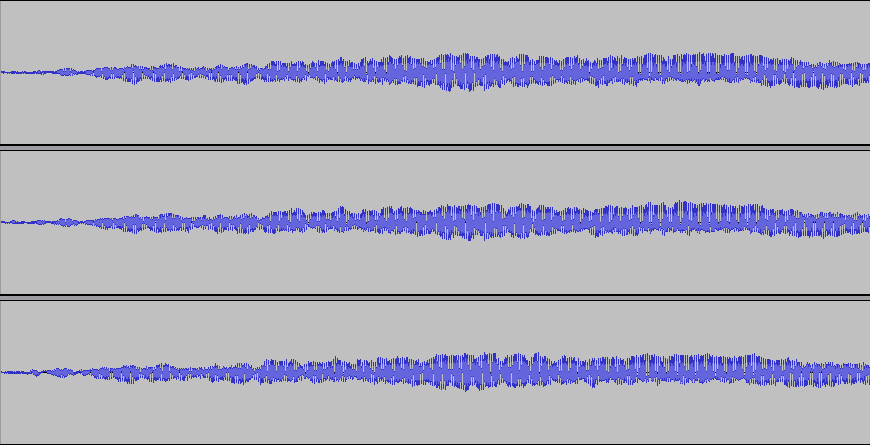 Whatever it is, the noises are not random in the slightest. Also, the right channel seems to pick the noise up more so I’d speculate that it is not really coming from the sky otherwise the volume should be fairly equal left and right, give or take a bit but not so much as is the case here. So it’s probably a job for the hoax bin.

posted on Oct, 4 2016 @ 02:45 PM
link
I once heard a similar sound about 5 or so years ago near Saint Louis- the one I heard had more of a roar to it though. It lasted for about 15 minutes. It was very strange and frightening.

Yup without a doubt the end of days.
Sounds like a gate being opened and closed...anything like that around?

Also has anyone seen the Kevin Smith movie Red State..released around the same time as the trumpet sounds vids became popular?.


Well over 37 people saw that movie. More on topic, everyone knows that the gates to hell need oil.

The first thing I think is "Flying humpback whales"
edit on 4 by AshFan because: fun