the Chinese missile is all over Yemen as it's sold to them by the Chinese for the Yemen Navy..

And the version of the missile fired in the past by the REbels in Yemen has been the Chinese version.

If you say so. The Yemeni Navy didn't have ships capable of launching the missile, nor were any coastal defence variants reported in the Yemeni military inventory prior to the Houthi uprising.

I posted the link.

And the Yemen rebels in the past being filmed showed the booster rocket fall off which is the Chinese version.

You didn't read my sources but I quoted the relevant parts.


Al-Masirah's footage of the missile being launched was shot at night, making it impossible to identify the system involved. However, it did appear to show a booster motor dropping away from the missile after the launch, which is consistent with the Chinese-made C-802 missile that is in service with the Yemeni Navy.

I was told these countries would be attacked..
I was in the US Army.
I was supposed to be Patriot Missile Fire Control..

I've been watching this stuff and doing my research.

Bangladesh Navy – Bangladesh armed the frigates BNS Osman, BNS Abu Bakar and BNS Ali Haider and has installed some shore based launch platforms. Also in use on the new Shadhinota Class corvettes.

People's Liberation Army Navy – In service with the PLAN

Iran reportedly possesses 60 of the YJ-82, deployed in coastal batteries at Qeshm Island.[1] Iran originally ordered 150 of the YJ-82 in the immediate aftermath of the 1991 Persian Gulf War, but due to American pressure, the Chinese suspended shipments of the missile to Iran in 1996 after 60 were delivered.[1] It is also suggested that China exported 15 patrol boats equipped with these missiles to Iran. A version of the C-802 is called the Noor.

Syrian Arab Navy Seen on Syrian National TV. in a military drill by the Syrian Arab Army in 2011 and again in 2012

Unless you fired it I doubt you could figure out where the missle originated, but the past Yemen rebel missile attacks on ships have been the Chinese version.

I'm not saying I know it was the chinese version, I'm jsut saying I don't know.

I won't ever give up on critical thinking.

Let me use my energy on more productive things.. For this thread..

So here is the ship in question.. 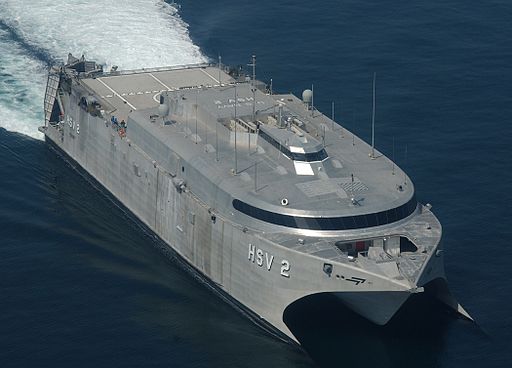 I think the story is legit that Yemen or Yemen rebels sunk that very ship with their anti ship missile.


Here is an awesome PDF on the balance of power in the gulf states, from 2010..

if anyone wants additional info on sort of balance of power, and capabilities, it's 6 years old and things have changed since Irans anti ship missile version of C802 came out in 2011..
edit on 1-10-2016 by Reverbs because: (no reason given)

You know, I don't think it mattered whether it was aluminum, tissue paper, wood, Titanium, the missile did it's job. It destroyed the ship.

posted on Oct, 2 2016 @ 02:22 AM
link
Given how expensive such ships are, one would think they would have at least some kind of defense system, CIWS etc.

originally posted by: moebius
Given how expensive such ships are, one would think they would have at least some kind of defense system, CIWS etc.

It was not a warship..

I think it was acting as a supply ship.

It was a test ship later sold..

It had no military application I'm aware of besides as cargo..

I don't think they suspected the rebels had that kind of weaponry. It's quite advanced.

It doesn't really matter how strong a ship is anymore.. Missile technology has surpassed armor. If you don't shoot it down you're screwed. that's why US carriers have so many defensive measures including gattling guns on them.

I see no counter to a massive misile stockpile. That's why Iran is such a big threat, and it has nothing to do with "nukes"

I bet they have the know how to do it from north korea.. But it really doesn't matter.

I hope my commanders were lying.

Let's just mosey on over and sail our ship to the coast of a nation under constant military bomdardment and see what happens shall we?

Nah...not like that could ever be a fit up job, to make the Yemeni people look like aggressors instead of the victims Saudi has turned them into...not in a million years!

This kind of news is worthless.

posted on Oct, 2 2016 @ 11:09 AM
link
The Swift was no longer an American ship. They removed it from US service in 2013. It was leased and operated solely by the UAE from Australia.

I expect nothing less from Middle Eastern Rebel groups.

Way to go! You did absolutely nothing to further your cause.

My hat is off to you and all you have not been able to achieve because of your short sightedness and complete lack of a back bone.

Armed forces all over the world have job security because of you.

...there are probably some "evil" "supply" Cruise ships with boat loads of Non-combatants in the Mediterranean that would make good targets too....Greek Aisles area in fact. Go get them! All inclusive SOB's !!!!!


Iran has also deployed submarines and warships off Yemen’s coast, in the Gulf of Aden and Red Sea, ostensibly to conduct anti-piracy operations

ASM can be launched from subs.

Sounds like a Iranian false flag in the great Hatfield, and McCoy blood feud that has been waging for centuries.

In other words the worlds longest running game of which version of Islam is cooler.

posted on Oct, 2 2016 @ 10:04 PM
link
a reply to: RedMenace16i might be mistaken but i thought that money belonged to shah of iran and after he was removed from power we chose not to send enemies sate of the art war planes if anybody is owed that money it should be his offspring of which there is 5

The Houtis make for interesting reading. They are the best fighters in the Arab world. Don't know what the Saudis were thinking when they started this war.

posted on Oct, 3 2016 @ 12:42 AM
link
You can see a lot of tracer fire just before the explosion so it looks like it had a phalnyx anti midsole system.

I guess now we know it doesn't work.