Hillary chooses the Methodist Church because it is corrupt with Neo-Paganism ideology, for example with gay Bishops and LGBT members.


ignorant or just an idiot?

Hey lets not be calling names.
I don't think you read my whole post, it's not me that is against LGBT. It's the Church itself and Hillary.

The Methodist Church is facing turbulent times with members getting divided into two factions: those who support gay rights and those who do not. Though Christianity has teachings that conflict with the rights of homosexuals, the Methodist Church has been increasingly becoming more and more lenient towards the LGBT community.

Then of course some believe Hillary is a lesbian, though I believe she is a Satanist using the Methodist Church to deceive Christians, LGBT community and voters. The reason she can do this, the Church is open to Neo-Pagnism.

Glenn Beck: Hillary Clinton ‘Will Be Having Sex With A Woman’ In The White House If It Becomes Popular
www.huffingtonpost.com...

Jenny McCarthy Suggests Hillary Clinton Might Be A Lesbian
www.huffingtonpost.com...

The American Family Association’s Sandy Rios is once again implying that former Secretary of State Hillary Clinton is secretly a lesbian and claims that the evidence is in the video announcing her presidential campaign.
www.huffingtonpost.com...

originally posted by: crimsongod21
a reply to: imitator
And lets be honest if either candidate was Satan trump looks the part much better I mean why does he need such big hair? Oh you know to hide his horns that's all.. 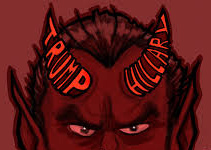 My family's Methodist as well, and if she's Satan Incarnate, she's doing a really lousy job. Heck, she's doing a terrible job for a demon... even a minor demon. I don't think she's an angel, which means she sure isn't a fallen angel. If she was a demon, Monica Lewinsky would have burst into a pile of ash. Bill Clinton would never have had an affair. No one would ever have heard of Benghazi. Andrew Rosenthal would have had a stroke. There would be no controversy attached to her because everyone would be charmed by her.

In fact, she'd be so charming that people would attend her rallies by the thousands. And news reports would always be favorable, no matter what she'd done.

posted on Oct, 1 2016 @ 11:19 PM
link
a reply to: imitator
I'm not lesbian, but my daughter is and several friends are... and those "reports" are absurd. There is no Lesbian Secret Signal. Lesbians do not have a Bat Signal or Secret Handshake or cough or whatever. In fact, the Church at one time sanctioned same sex marriages: anthropologist.livejournal.com...

And Glen Beck is well known for making up facts.

You just broke my heart a little bit I was hoping that people that were gay had some super cool secret hand shake and bat signal. It would be a small consolation for all the hate and terror they have to put up with, and also come on batsignals are fing awesome.

I'm talking about Hillary decieving the Church, LGBT and the voters. Yeah, she is not charming. I can agree with that. You know, Revelation 12:7-9 that old serpent, called the Devil, and Satan, which deceiveth the whole world:

Deceit is a way to create and attract self-attention. Hillary is perpetrating deceit on the Church and it will become more self-centered as a result, which she seeks, and even if she ultimately fails she will still gain more attention. Emails... Huma Abedin... Benghazi... etc...

However, deceit advances her goals, and it's for her own sake that is beyond any political purpose.

Glad I don't go to your church then what a backward way of thinking.
Who are you to judge? I know gay Christians who are welcomed at their church.