posted on Sep, 30 2016 @ 06:06 PM
link
The Newsweek site was down for hours on Thursday night following the publication of "The Castro Connection," a story detailing Trump's violation of the Cuban trade embargo in the run up to his aborted 2000 campaign — a clandestine foray later hidden behind a false pretense of charity. For those unfamiliar with the article/incident, there's a thread here.

The editor-in-chief of Newsweek confirmed Friday that the magazine's website was on the receiving end of a denial-of-service attack Thursday night, following the publication of a story accusing one of Donald Trump's companies of violating the Cuban trade embargo.

"Last night we were on the receiving end of what our IT chief called a 'massive' DoS (denial of service) attack," Impoco wrote in an email to TPM. "The site was down most of last evening, at a time when Kurt Eichenwald's story detailing how Donald Trump's company broke the law by violating the U.S. trade embargo against Cuba was being covered extensively by prominent cable news programs. Our IT team is still investigating the hack."

The story goes on to mention the involvement of Russian IP addresses in the attack though this is meaningless in of itself.

What isn't meaningless is that it shows the lengths to which some of Trump's online support is willing to go to suppress negative information about the Sniffleupagus. Botnets flooding the media. Botnets skewing the results of web polls. Hackers targetting the opposing party's staffers.

Welcome to the Trump campaign, a cooperative effort of the Kremlin and cyber terrorists.
edit on 2016-9-30 by theantediluvian because: (no reason given)

posted on Sep, 30 2016 @ 06:22 PM
link
I would be concerned if the attacks were not increased after the debate. DNC is shaking like a French Soldier right now. Really proud of Trump and looking forward to Nov. Going to be a great day for America. Shaping up to be worse than the mid terms where Obama was ashamed at what went down.

Just to clarify, we're supposed to be super concerned about Trump's candidacy because a small handfull of hackers and Russian IT shenanigan creators are doing something which may benefit him...
but Hillary Clinton's handling of classified emails and destruction of electronic evidence, suppression of whistle blowers laying bare illegal CIA data snooping, federal agencies ordering emails deleted, databases erased, and hard drives destroyed to avoid federal investigations and checks and balances, Obama's prisoner swap which freed an Iranian hacker who had played around in defense contractor networks illegally, and the director of Medicare and Medicaid Services destroying (or "losing" all email records related to the security failures of the government's ACA Healthcare.gov website, in total violation of federal law requirements are presumably less of a concern?

Trump 2016... because the alternative is a continuation of the most cyber-security inept and corrupt adminsitration in US history.

posted on Sep, 30 2016 @ 06:24 PM
link
Where's that idiot that told everyone they would 'know' if MSM was hacked and it was a wild conspiracy theory that Trump supporters use dirty online tactics and ENDLESSLY said "Well prove it." With a stupid smug ass smile.

originally posted by: greydaze
Yeah Man,There is no doubt that Russia's oligarchs have ties with Trump..Pretty scary.

Clinton's ties are with the Chinese and Arab Emerates... honestly, who's more frightening in 2016: The Russians, who's only substantial action/threat against the USA in the past 20 years consists of pointing, laughing, mockery, and ridicule... or the regions producing all of the terrorists alongside the country that is best poised to knock the US off the top of the ladder as the world's penultimate economic superpower?

Yet again another hit piece.

Do you really think this actually does any good.

If this sort of thing is all you have then I think the Witch you work for will end up in hell or prison where she belongs.

it doesnt matter what dirt is dug up on trump. the Trumpetier's (irrational love for trump) cant really be dissuaded.
i really want november to come so all this insanity can go away. this election cycle has got to be an embarrassment for the U.S.

-im still voting trump. for all the right reasons...


Welcome to the Trump campaign, a cooperative effort of the Kremlin and cyber terrorists. 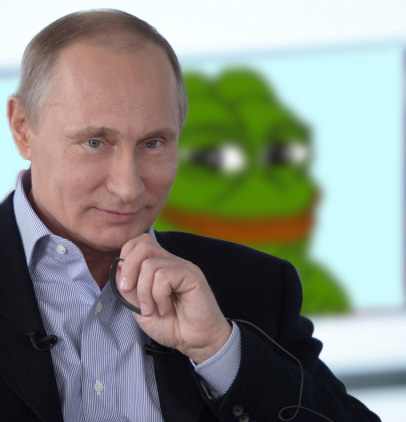 Why'd the OP choose to add insults to a news story?

originally posted by: greydaze
Yeah Man,There is no doubt that Russia's oligarchs have ties with Trump..Pretty scary.


You should be more concerned about the ties Hillary has with the patriarchy over in Saudi Arabia rather than a bunch of anti-globalist capitalists in Russia.

posted on Sep, 30 2016 @ 06:46 PM
link
SO.... I GUESS we can count on a few LEAVING when he's elected?
SEEMS to me that chickensh#t sentiment IS apropos for all the SJWs since this little social war met American forces...

The Trump narrative was to say MSM being hacked was a crazy conspirator for 3 days. Insults is a given in their "comments".

Some seem to not be able to read anything negative about orange Messiah. You need to think about their feelings and stop the microagressions so this can continue to be a safe space where their views will not be challenged!

Or moron whatever you prefer.

Just to clarify, we're supposed to be super concerned about Trump's candidacy because a small handfull of hackers and Russian IT shenanigan creators are doing something which may benefit him...

No, we are supposed to be concerned because there is a concerted effort to undermine Americans' faith in liberal democracy. Once we, as a nation, reject that, we are on the path to an authoritarian dystopia. Just sayin'....

Just to clarify, we're supposed to be super concerned about Trump's candidacy because a small handfull of hackers and Russian IT shenanigan creators are doing something which may benefit him...

Well first and foremost, I would never presume that you would ever be concerned about anything involving Trump. You've done an excellent job of being aggressively ignorant when it comes to Sniffles.

For instance, I wouldn't expect you to be concerned with the fact that Trump is a clown who parrots whatever is whispered in his ear including a foreign policy designed to increase Russian influence around the globe.

I'm sure you know that one of Trump's biggest supporters is the co-founder of Palantir Technologies right? You do know who Planatir is and what they do, right? You do know that Trump has said on multiple occassions that he supports expanding domestic surveillance programs?

Where is Edward Snowden again? Russia. Who obtained asylum for Snowden in Russia? Oh, that's right Julian Assange, who in taking that action, revealed that he obviously has ties to the Russian intelligence apparatus.

That's the best you can come up with?

I'll take a continuation of the Obama administration over a change to one run by Vladimir Putin's useful idiot (and that's giving him the benefit of the doubt that he's not a traitor).
edit on 2016-9-30 by theantediluvian because: (no reason given)