FINALLY! I get to train with Sigung Richard Bustillo!

The whole city. Like everyone. Even the hush-puppy-wearing hipster of the East Village is chomping at the bit for mat time.

And if you have spent time in various gyms rolling you KNOW that not every place uses enough of their disinfectant budget. Cauliflower ear? It does happen, but that isn't nearly the problem in BJJ as it is in 'wrassling'.

It's a pleasure to meet new people that are under 40 (no ageism here, but I haven't gotten that old and those [in my experience I'll say 85%] that are, are looking to prove something and get carried away or upset and bitching, generally those dudes aren't fun to fool with) and keep good hygiene. I can understand the bad hygiene when I was 15 and wrestling in high school, but there's not a single good reason why an adult would spend 45 minutes riding into the city to train without having showered in 3-5 days. That should be verboten.

I prefer the blood chokes because I have small wrists - it's a significant handicap when positioning - and the ulna is essentially all that is there (save for an 1/8th of inch of skin) and it puts the clamp down on those arteries with the quickness. About the eyes? I've yet to have an encounter where looking into someone's eyes was a problem. And if it were an omoplata, good luck finding my eyes.

At any rate, it sure as hell beats running or swimming as an exercise.

Slow down there. I think my krav comment came across wrong. Real krav like youre learning is kick ass and effective. Krav is victim to the trend of other mcdojos jumping onto the name and teaching bs krav. Theres a lot of really bad bjj schools out there too. Frauds trying to capitalize on the names of other arts.

Agreed--and that's why when you said that you that you largely agreed with Reldra (who, I must assume, was talking down Krav as a whole, and, it would seem, my instructor as well), I was kind of surprised. If that's not what you meant (and it's obviously not), I do need to slow down.

I just get really, really tired of other martial artists who talk down Krav, and quite honestly, it is a lot more pervasive in the world of martial arts than I realized. I do understand that it's not technically an "art," but a defensive system, but I know for a fact that those who talk it down in such a way as Reldra did are doing so out of ignorance. I'm sorry that I put you in that same group--I should have known better, and I do apologize.

I understand that you weren't dissing the school, but I was concerned (again, since you were agreeing with Reldra) that you were dissing Krav as a whole. Again, my apologies.

Besides all of those arts are BS. i only study Ameri-Do-Te nowadays

Again, I do apologize--I really, REALLY hate when I mischaracterize people or their comments.

I'm not there with the grappling yet--my school does have Combative Jiu-Jitsu as its own class, and here in a few weeks when I'm in level 4 of Krav, 1/3 of the curriculum is grappling/mat work, so needless to say, I'll be adding in the CJJ in order to excel in my skills on the mat much more quickly.

I'm never afraid to get my ass kicked, though, so if I'm ever in your area, I'll let you know and you can school me with what you know. I'm always open to learning by doing, I just don't have the time to do everything that I'd like to do, what with a toddler and a teenager at home.

ETA: Also, I've been nursing a damn AC-joint problem for nearly a damn year now, so grappling has been on hold because of that. It's slowly getting better, but it's still sucking, and it's pissing me off because it's holding me back. I hate injuries.
edit on 1-10-2016 by SlapMonkey because: (no reason given)

That's still a lot with a tot and teenager - impressed. By all means, PM if you are ever interested in rolling with a fellow ATSer. I hope it happens, it'd be awesome.

Thanks for wishing me luck--five hours each day this weekend. I'm as giddy as a schoolgirl on Justin Bieber Day!

Dude have a blast and bring a notebook and write copious notes in between breaks.

Approach him during breaks to clarify stuff and get some extra time in with the man.

Youre going to enjoy learning from the man i have no doubt.
edit on 7-10-2016 by BASSPLYR because: (no reason given)

It was a damn blast--he even had me demonstrate a few things, and I actually did them not just correctly, but well (which is a big deal when all I've really done prior to this point is Krav and Eskrima). There was a LOT of martial-arts knowledge in that room, and he even had some of his top instructors from his the IMB Academy in California there with him.

I was okay with the Muay Thai boxing session on Saturday morning and the Eskrima/Kali Saturday afternoon, as Krav has a lot of striking in it, and obviously my comfort with Eskrima was already there.

Jeet Kun Do on Sunday morning was a bit more testing of my skills, but I was still relatively decent at it (this was where he had me demonstrate a couple of things because he was watching me do them correctly--talk about feeling a bit of pressure).

The Jiu Jitsu on Sunday afternoon was the one that was the farthest from my comfort zone. I did like all of the wrist locks and key locks and techniques to get out of them in the standing portion, but once we got down on the mat, that was where I was uncomfortable with it, as I hadn't done any ground combatives yet. That said, I loved it. The only thing was was really odd for me was the rolling on the mat--when we got into the techniques about countering chokes and applying arm bars and ankle pressure, I was decent at that (although being 5'5" tall, getting my arms able to lock around someone's head or getting my legs over their heads is a bit of a challenge--but there's always a way).

I'm excited, because when I test out of level 3 (Krav) on Friday, 1/3 of the level-4 curriculum is ground combatives taken almost directly from Jiu Jitsu, so I'm pretty pumped to learn some of that. Hell, that's all that we worked in Krav last night, even though it is level-4 stuff--I enjoyed it, but damn, don't start throwing random s**t in my brain the week of testing!

Anyhoo, this is a big enough occasion to share a pic of me on ATS, which I very rarely do--Me and Sigung Richard.

It really was great, and some of his stories about getting into martial arts and about Bruce Lee were really great to hear. 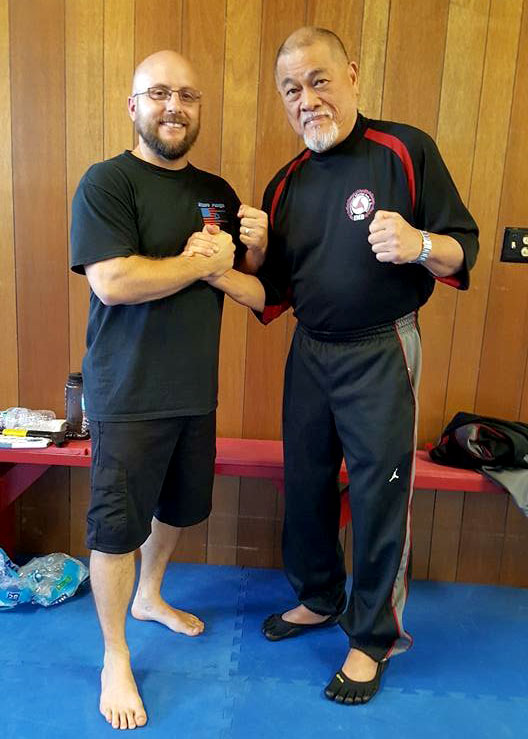 Enjoy it and soak up all you can.

Jits is very weird at first, especially coming from a striking background, even having decent cardio I gassed a lot and got wrapped up by a girl endlessly for about 3 months before being able to put things together enough to not tap so often. The learning curve is harsh but it's humbling and definitely fun.

Anybody in London that wants to roll sometime is welcome to hit me up.