posted on Sep, 29 2016 @ 11:28 AM
link
Many of you are probably familiar with the "Purge" movies. They are about an America in the not-too-distant future, where an annual event known as "The Purge", which is implemented and encouraged by the government and authorities, allows people to commit any type of crime for 24 hours. The "Purge" is meant to let people rid themselves of violent/evil "cravings" so that crime will be lower the other 364 days of the year (yeah, it's messed up).

Anyway, I came across a pic today of a scene from the Purge that is reminiscent of the first POTUS debate between Trump and Hillary. Check i tout: 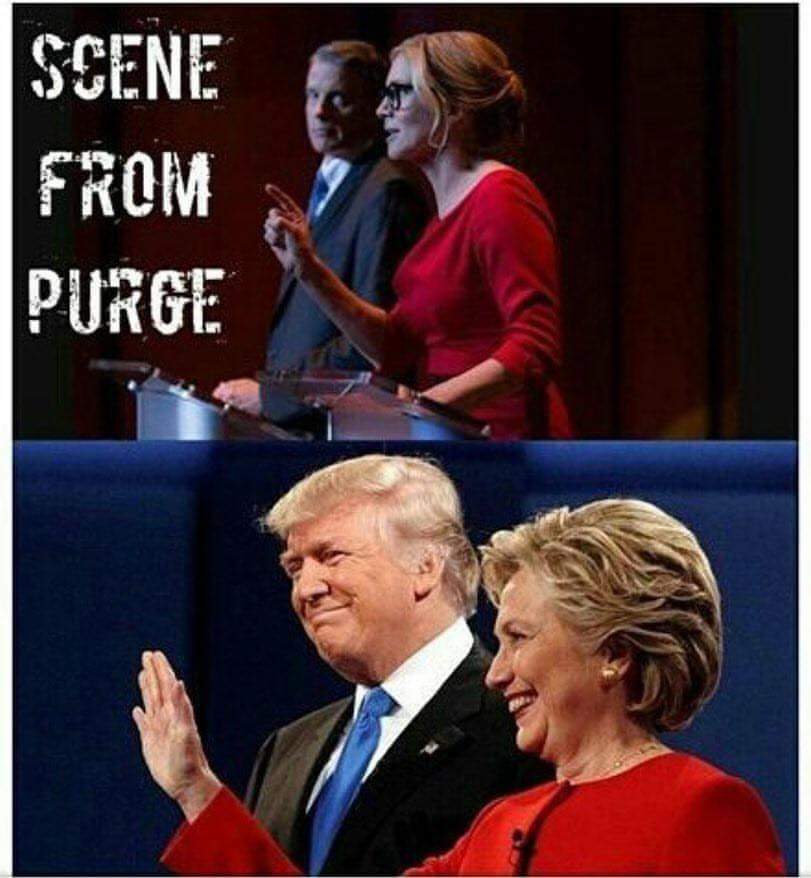 True, the man and the woman in the Purge scene are both much more pleasing on the eyes than our two Presidential Frontrunners. And the "Senator" lady from the Purge has glasses and is much younger appearing, but I thought it was interesting they are standing in similar orientation to one another, their outfits match those we saw at the debates, and it is believed that Hollywood has close ties with TPTB and often promotes ideas and issues that would be beneficial to certain interests and motives of the G0v and benefactors of our "leaders".

Here is the trailer for "Purge Election Year"

I mean look at this video for example:

Fun fact, if we had a real 'purge', many of the corrupt powerful families running things would have been wiped out generations ago.

If you watch the movies though especially in the 2nd one, many of these powerful families lived in enclaves surrounded by armed guards plus they have death squads to make sure that the masses only kill each other only and not the elites.

posted on Sep, 29 2016 @ 12:03 PM
link
a reply to: lordcomac I am sure the purge is only legal for ordinary citizens, you are not allowed to target anyone in authority, eg, police, government officials etc