Senator Chuck Grassley just penned a letter of concern to Homeland Security over CIS emails that show immigration offices directing their workers to process as many immigration naturalization applications as possible - specifically before the election. This happened once before in our recent history, too. The Resident breaks it down.
...

It seems the Obama administration is rushing more and more illegal immigrants who are supposed to be deported and instead their U.S. citizenship is being rushed before the elction.

The nation's top immigration officer said that the "11 million" undocumented aliens in the United States are "not going away," are "in effect" citizens, and added that deporting the few the administration wants out is unpleasant.

Jeh Johnson, secretary of Homeland Security, told Harvard University students this week that the administration is focused on its plan to integrate illegals into America, despite the policy being tied up in court.
...

In an attempt to create a robust voting bloc and suppress the will of several states, the Obama administration is pushing to enfranchise non-citizens, including illegal immigrants. The Immigration Reform Law Institute (IRLI), FAIR’s public interest legal affiliate, is representing Kris Kobach, secretary of state of Kansas, who is trying to work with the ostensibly non-partisan Election Assistance Commission to help ensure that only citizens register to vote.

At the core of the case, the commission is required to amend the federal voter registration form to reflect each state’s strictures against registering non-citizens. States must register voters who use the federal form under the National Voter Registration Act of 1993, better known as the Motor Voter law.
...

This is how the Obama administration is trying to win the election for Hillary, by rushing citizenship to illegal immigrants in the U.S., who will mostly vote in favor of democrats.

edit on 28-9-2016 by ElectricUniverse because: correct link.

posted on Sep, 28 2016 @ 07:10 PM
link
Just for the record, how do the numbers stack up compared to previous years? As in, where is the proof that the number of immigrants being granted citizenship is higher right now than at other times?


I'm sure it works like that in the U.K.

That's only comparing the number of applications for citizenship with the election season of 2012. It's the immigrants themselves who file those applications to become citizens, not the DHS. From your own source:


Applications for immigrants applying to be U.S. citizens are higher now than they were in the last election cycle. Between October 2015 and March 2016, Immigration Services received 439,887 N-400 applications for citizenship, compared to 412,414 applications in 2012 during the same period. That’s about a 6% increase.


How does that fit the OP's claim that this is because of Pres Obama and the DHS? If anything, we could blame the anti-immigrant rhetoric for the increase, since they'd theoretically want to avoid being deported by a possible Trump administration.
edit on 28-9-2016 by enlightenedservant because: (no reason given)

originally posted by: ElectricUniverse
It seems the Obama administration is rushing more and more illegal immigrants who are supposed to be deported and instead their U.S. citizenship is being rushed before the elction.

Haven't seen any evidence for this.

This is how the Obama administration is trying to win the election for Hillary, by rushing citizenship to illegal immigrants in the U.S., who will mostly vote in favor of democrats.

posted on Sep, 28 2016 @ 07:23 PM
link
You still need to register to vote after gaining citizenship and that can often take weeks to get your voter registration card. 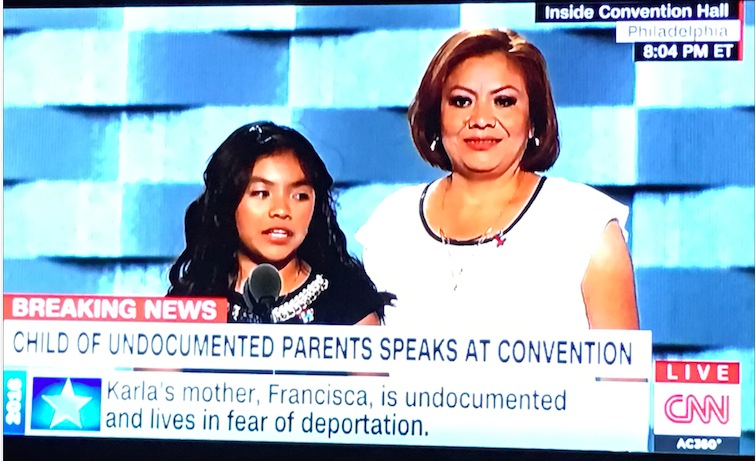 What is sad is all the people that have followed the legal path to citizenship. I have a very good friend and it has taken her YEARS, she became a citizen at the beginning of the summer.

In an attempt to create a robust voting bloc and suppress the will of several states, the Obama administration is pushing to enfranchise non-citizens, including illegal immigrants.

If you are NOT a citizen of the United State you should NOT be allowed to vote!!! Why not just let the world vote?!?!


Now that you’re a US citizen you can vote in all elections held at the federal, state, county, and municipal levels. Registering to vote can be done in two ways. You can register: by mail, either by printing the forms online or by having them mailed to you, or in person at one of the many local government, public service or political party offices that handle voter registration.

NewCitizen
edit on 28-9-2016 by GodEmperor because: added quote


If you are NOT a citizen of the United State you should NOT be allowed to vote!!!


That is proposal about visa rules.
Not relevant.

With the passage of the National Voter Registration Act of 1993 (NVRA) ? known as the Motor-Voter law ? the process of registering to vote became nearly automatic for anyone applying for a state driver"s license. Under this law, the information supplied by the applicant for a license doubles as information for voter registration unless the applicant indicates that he/she does not want to be registered to vote. With driver"s licenses made available by several states to aliens (both legal and illegal), it seems likely that voter rolls now contain large numbers of non-citizens enough in close elections to change the outcome if those aliens illegally vote.

The DHS is part of the Obama administration.

Sens. Grassley, Johnson demand answers from department, which had previously denied doing that

The Homeland Security Department is granting as many citizenship applications as it can to try to sway participation in this year’s presidential election, an internal department document shows.

An email obtained by Senate Republicans shows a Texas immigration office demanded volunteers to work weekends, hoping to get as many people onto the citizenship rolls as possible before the end of September — which would give them enough time to register to vote in November.

Democrats and immigration groups had launched a drive to try to get eligible immigrants to become citizens in time to vote against Republican presidential nominee Donald Trump. The advocates fell well short of their goal of registering 1 million citizens, but the 600,000 they didn’t get to sign up by June have created a massive backlog that U.S. Citizenship and Immigration Services is now working through.
...

In fact, President Obama, among his promises, included that he would start a path for illegal immigrants to become U.S. citizens. Some of that momentum was stopped, but President Obama took other measures.

In June, the U.S. Supreme Court deadlocked 4-4 over a Texas case related to President Barack Obama's efforts to help millions of illegal immigrants temporarily avoid deportation. That ruling and other events are stopping Obama from keeping his campaign promise on a path to citizenship for undocumented immigrants.

Obama's programs were intended to help certain people who came here as children and their parents. While it would not have provided a permanent lawful status to applicants, it would have made it easier for them to work and study here.

The decision was another blow to Obama's efforts to change immigration laws and promise to provide a path to citizenship.

We rated Obama's 2008 pledge as In the Works after the Senate unveiled an immigration bill in 2013 that included several hurdles for undocumented immigrants, including fines, background checks and a waiting period, before they could be on a path to citizenship. But the bill stalled in the House when leadership refused to bring it up for a vote.
...

Obama moves to give legal status to 5 million illegal immigrants

President Obama announced an expansive new set of executive actions in a prime-time address Thursday that the White House says will give legal status and work permits to 5 million immigrants in the United States illegally.

Obama hailed the moves as leading to a “more fair and more just” system in an address that lambasted Congress for not approving legislation and warned Republicans against triggering a government shutdown.

ADVERTISEMENT
In a sharp rebuke to Republican critics, Obama challenged his political opponents to “pass a bill” if they did not like his actions, and argued his approach could not be dismissed as “amnesty.”

“Amnesty is the immigration system we have today — millions of people who live here without paying their taxes or playing by the rules, while politicians use the issue to scare people and whip up votes at election time,” Obama said.
...


Then, the Obama administration urged legal immigrants to become citizens.

White House officials announced the start of a nationwide campaign on Thursday to encourage legal immigrants to become American citizens, which could add millions of voters to the electorate in time for the presidential election next year.

With about 8.8 million legal residents in the country who are eligible to become citizens, White House officials said they were trying to make it easier to complete the final steps to citizenship.

The United States Citizenship and Immigration Services, the federal agency in charge of naturalizations, will offer practice tests on cellphones for the civics exam that immigrants must pass, but which many find daunting, and will hold preparatory workshops in rural areas. Applicants will also be able to pay the fee, still a hefty $680, with a credit card.
...


Not that simple Phage

Allow me to clarify, you must be a citizen to legally vote. This thread is not about voter fraud. It is about, supposedly, a rush of people applying for citizenship so that they can legally vote. Supposedly for Clinton.


The Homeland Security Department is granting as many citizenship applications as it can to try to sway participation in this year’s presidential election, an internal department document shows.


Wow.
Can you show us that memo? I would like to see the part about "swaying participation."


The SCOTUS said no.

Then, the Obama administration urged legal immigrants to become citizens.

800 isn't even a drop in the bucket, how would this affect anything?

Whatever phage, I am right.


“This final rule facilitates the legal immigration process and reduces the amount of time that U.S. citizens are separated from their immediate relatives who are in the process of obtaining an immigrant visa,” said Secretary Napolitano.


encouraging eligible long-time LPRs to naturalize so that their spouses, parents, and children under the age of 21 years can become immediate relatives and also benefit from this new process.

Immediate relatives have special immigration priority and do not have to wait in line for a visa number to become available for them to immigrate because there are an unlimited number of visas for their particular categories.