Why 'radioactive' Deutsche Bank could go nuclear at any time, experts warn


Germany's biggest bank reportedly has a $45 TRILLION (£34trn) portfolio of underlying assets that its clients are taking a position in - which equates to more than 10 times Germany's entire GDP.

And the problem is that no one really knows what's makes up Deutsche's book of exposure and so-called derivatives book because it's so opaque and complicated, according to Michael Hewson, chief market analyst at CMC Markets UK.

He told Express.co.uk: "Deutsche has the biggest derivatives book in the world, and people will say that its hedged to a greater or lesser extent, but it's the interconnectedness with the rest of the system that is the problem.

I don't understand banking. I do get that the little guy cannot make any money with a savings account anymore. I do get the game is rigged against small investors.
But what the heck is going on...and what does it mean to you and me????


From the Guardian:
Deutsche Bank: how did a beast of the banking world get into this mess?


Everything you need to know about the bind Germany’s biggest bank finds itself in, and why it matters

and the scary thing is what happens after:

Because you know with an institution as central as is DB, the effects will be wide spread.

Either way, it plays in to the hands of the money behind nations.

There was a thread on here a while back that implicated the Deutsche Bank in the "suicides" of several people in the banking industry a few years ago.
I remember thinking at the time that it was too coincidental for them all to be suicide and they all happened in a short space of time and then stopped. It happened well after the crash of 2008 so it just seemed like weird timing.
ATS

So I wonder if they were related to the situation the Deutsche Bank find themselves in just now.

Chancellor Angela Merkel has ruled out any state assistance for Deutsche Bank AG in the year heading into the national election in September 2017, Focus magazine reported, citing unidentified government officials.

The German leader also declined to step into the Frankfurt-based bank’s legal imbroglio with the U.S. Justice Department, which may seek as much as $14 billion in sanctions against Deutsche Bank’s mortgage-backed securities business, the magazine said. A German government spokesman declined to comment on the report Saturday.

All going down de chutes!

Look at what Wells Fargo did no one seems to ever lose their businesses.

posted on Sep, 28 2016 @ 06:33 PM
link
Any one else wonder if, given that these large banks tend to hide so much and have huge amounts of money represented by financial products that no one seems to understand, that all this wealth is fake.

We've been talking about this for quite some time. Will the government step in again and "bail them out" if something goes wrong? What other choice do the Governments of the world (who have been complicit in these irresponsible banking practices) have?
It would just be a temporary band-aid on a much larger problem, but you know they will want to kick the can down the road just like they did with raising the US Debt Ceiling 2 years ago

Oh, the chans have been on it but it's not up front and central, you have to root around for a bit; lemme see if I can come I with some links.

I'm just getting home from work and had my headspace all in the stonetear thing so I'll have to switch gears a bit.

The allegations were part of the so-called Panama Papers, a massive trove of leaked emails, PDFs and other records that expose a world of letterbox companies and business arrangements that until recently had been largely hidden from public view.

The Panama Papers were first obtained by reporters at the German daily "Süddeutsche Zeitung," and on Sunday, the head of the paper's investigative unit suggested to a German TV host that every bank in Germany was somehow implicated.

"If you were to ask me which German bank hadn't helped its customers go to Mossack Fonseca, I would have to think long and hard to see if a single one came to mind," said Georg Mascolo, referring to the Panama-based law firm that is at the center of the leaks because it's where the documents originated.

Mascolo proceeded to single out Deutsche Bank and Berenberg bank, the latter of which he said had "especially distinguished itself."

Not illegal per se

And guess what else?

According to public disclosures, by giving just 12 speeches to Wall Street banks, private equity firms, and other financial corporations, Clinton made $2,935,000 from 2013 to 2015: 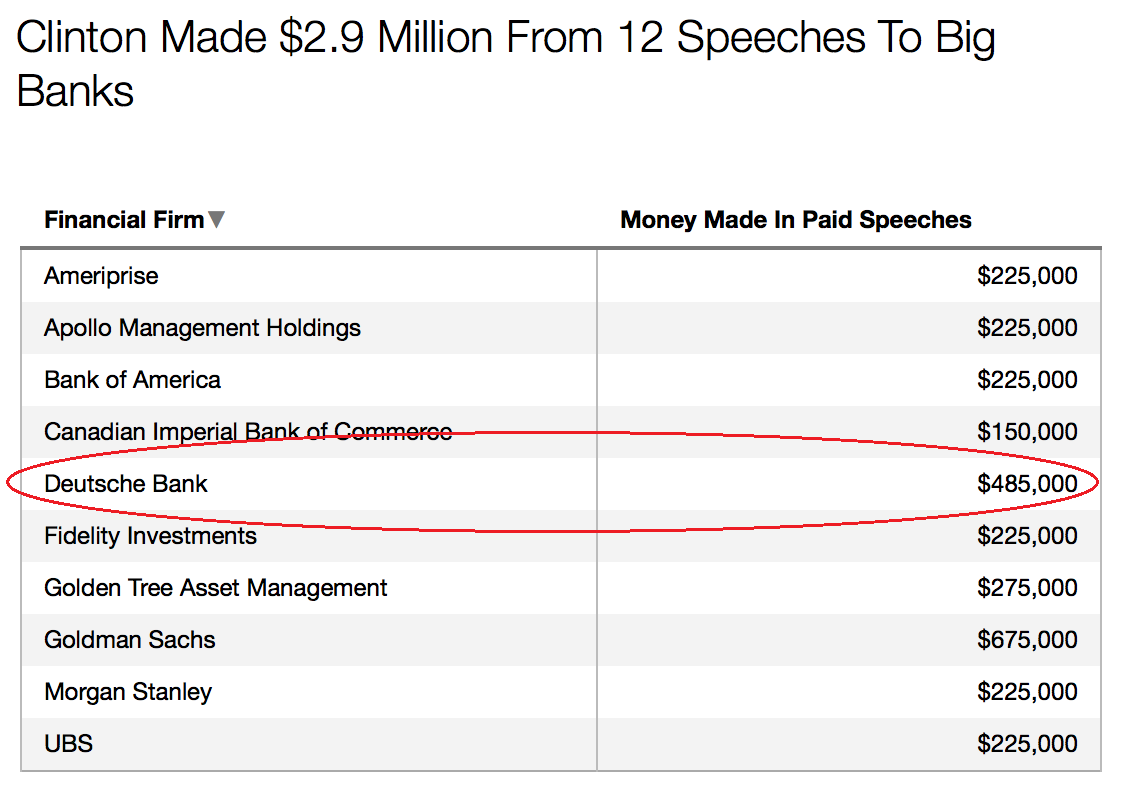 
We've been talking about this for quite some time. Will the government step in again and "bail them out" if something goes wrong?

once again its not about if but when and oh its called a by in and that requires them taking our savings and pensions .

We've been talking about this for quite some time. Will the government step in again and "bail them out" if something goes wrong? What other choice do the Governments of the world (who have been complicit in these irresponsible banking practices) have?
It would just be a temporary band-aid on a much larger problem, but you know they will want to kick the can down the road just like they did with raising the US Debt Ceiling 2 years ago


Problem is Deutsche Bank has exposure to $72 trillion of derivatives which is many times greater than German GDP. So it will need the FED to help bankroll.

Video is well worth watching. tks.


Much has been written about its pending collapse in zerohedge etc. I know people who put bets on its collapse over a year ago.

posted on Sep, 28 2016 @ 07:00 PM
link
When this BUBBLE bursts... ALL of THOSE Involved with speculative trading and creating the bubble should be jailed.. including the lawmakers who allowed this to happen so soon after the last bubble...

Reinstate Glass-Steagal... and bring back some control on the BIG BANKS...


The enhanced proplem is that...yawn, the Donald owes Deutsche Bank hundreds of millions of dollars, that the US is currently looking for around $14 billion off of the Deutsche Bank, (far greater than any prudent monies they had allowed for...$ 2/4 billion) because of misleading the punters into dodgy investments, AKA the hedge funds. The whole caboodle is not likely to be settled for some time, which could mean that the Donald has the keys to the White House by then.
That could make the outcome, wevy interestinnng'

Those loans are nothing compared to this:

Reports have also pointed to Deutsche Bank's global derivatives risk in the range of $75 trillion which is 20 times greater than the German gross domestic product (GDP).

Wasn't this bank trying to get their gold stored in USA back a couple of years ago. The us wouldn't give it back. Maybe another bank?

EU imploding upon itself?