Clownist? are we really afraid of Clowns

posted on Sep, 24 2016 @ 04:15 AM
link
Just saw this and made me wonder. When I was a kid (a long time ago) Clowns were entertaining and funny, how have they slipped into the evil mantra, Hollywood? or something more sinister. People making clown reports to the police??? WTF

Now, looking at the picture surely makes the hair on the back of my neck stand up but I can't figure out why? is it the clown costume? would I have the same reaction if the perp was wearing a different costume? say a french maid or Elsa, Princess of Arendelle? no idea

Charged with wearing a mask in a public place? really, that is a crime in the US? ...... watch out, it's Halloween soon so all kids are going to be arrested and charged for going with the theme on your trick or treat walk abouts?

Anyways, full story with pics in the link

Still not afraid of clowns (looked at link) and I am a huge Stehen King fan. Some people are. I am not sure why.
edit on 24-9-2016 by reldra because: (no reason given)

Yeah, I love Stephen King as well but this didn't remind me of Pennywise from IT. Reminds me, I must chase up on the "Dark Tower" books i have not purchased and read

My brother had weeks of screaming in the night after he saw this cover. I bet I could text him the image and his sphincter would twitch lol. Childhood memories and associations are powerful mojo

Clowns and dolls seem to have a strong, profound base in our cultural subconscious. How many people would flinch at the idea of spending a night in a room full of stuffed clowns and Victorian dolls with those glass eyes?

A bit odd the law they are breaking....you can't dressup anymore
edit on 24-9-2016 by TheKnightofDoom because: (no reason given)

LOL at your brother comment, strange as it seems, me and my sisters used to sleep in rooms full of dolls, teddy bears and clowns.

You are right, I couldn't sleep in a room like that now

edit on 24-9-2016 by IgnoranceIsntBlisss because: (no reason given)

I think it basically boils down to the face make up/paint. I don't have a fear of clowns but my sister does. No idea where it came from.

I just asked my seven year old if she was scared of clowns and she laughed and said no. So I clicked on the OP link and she laughed at the 'arrested' clown, so I showed her Kandinsky's clown, and again she laughed. When I scrolled back up to IgnoranceIsntBliss's video shot, she screamed and ran out the room! LOL

When we discussed that it was just a man in a costume, she agreed, but it was definitely the eyes and mouth that caused the reaction. I never played her the video as that would have tipped her over the edge!

posted on Sep, 24 2016 @ 05:07 AM
link
I wonder if there's any kind of statistics around the net that indicate percentage of people of various age groups who have this fear or phobia. I honestly think it's far more prominent in adults though I have encountered a small but notable number of kids who do in fact have this fear.

The adult side of the fear I don't personally share but it seems to me that the logic is plain as day. Perverting anything that represents innocence in the subconscious leads to fear. The juxtaposition of a representation of children's innocence with the thought that that very representation could be anything... serial killer, molester, evil, homicidal maniac, abductor, etc... Due in no small part to the entertainment industry taking advantage of something so engrained in the average human adults psyche...

I dunno. Maybe it's just me but it seems like a long time ago someone took advantage of a cheap scare by following this line of thinking and it's just one of those things that ended up deeply and permanently entrenched in the dark recesses of our collective mind.

Like I said, clowns don't bother me one bit. Killer clown? Same reaction as with anyone else I'm a dangerous situation involving. Hit it in the face, make sure it stays down and run like hell. Now if someone approaches me in a gas mask? Totally irrational fear there. No idea why. Every time someone puts one on to freak me out I immediately remind myself of my Staff I lost a few years ago. Sweetest dog ever but if you came in the door wearing a hood or hat, cover your plums. He would literally kick you in the crotch and run away barking. Same reaction with me.

I like to face my fears though. I now have over 100 different forms and generations of gas masks in various places around my house. I suppose I'm weird like that.
edit on 9/24/16 by Magnivea because: (no reason given)

Absolutely brilliant, thanks for the video clips!!

I think now, I am afraid of clowns, certainly when it is dark and the mofo's have huge mallets and chainsaws

Still not afraid of clowns (looked at link) and I am a huge Stehen King fan. Some people are. I am not sure why.

I once read that children are afraid of clowns because their young brains can't make sense of a situation where someone is smiling despite suffering pain (as you would expect a clown to suffer if he is being smashed with a plank of wood etc.) or is sad.

Edit to add: I have just read a very, very interesting article on the "uncanny valley" effect on Wikipedia. This "is the hypothesis that human replicas that appear almost but not exactly like real human beings elicit feelings of eeriness and revulsion among some observers". Although the concept was originally formulated in the context of robots becoming increasingly human in appearance (and behaviour), it is easy to apply some of the theory to clowns. So much so, in fact, that I am surprised there was no mention of it in the Wikipedia article.
edit on 24-9-2016 by lacrimoniousfinale because: (no reason given)

posted on Sep, 24 2016 @ 05:55 AM
link
I hated clowns as a kid [before Stephen King's IT]. My reason was that they were a) not funny and b) insincere.
To me they were 'problematic clowns', meaning I saw them for what they were. Dodgy geezers in make up, trying to be funny, when in real life they have tattoos and are alcoholics or wife beaters.
I couldn't laugh at them, even as a kid.
I was never 'scared' of clowns in the way people are nowadays but I sure was weary of them. Actually, I can't stand them. All false facade and no humour...brrrr

Everyone from Bozo to Ronald...

If I were a kid, this Sh!t would give me nightmares.... 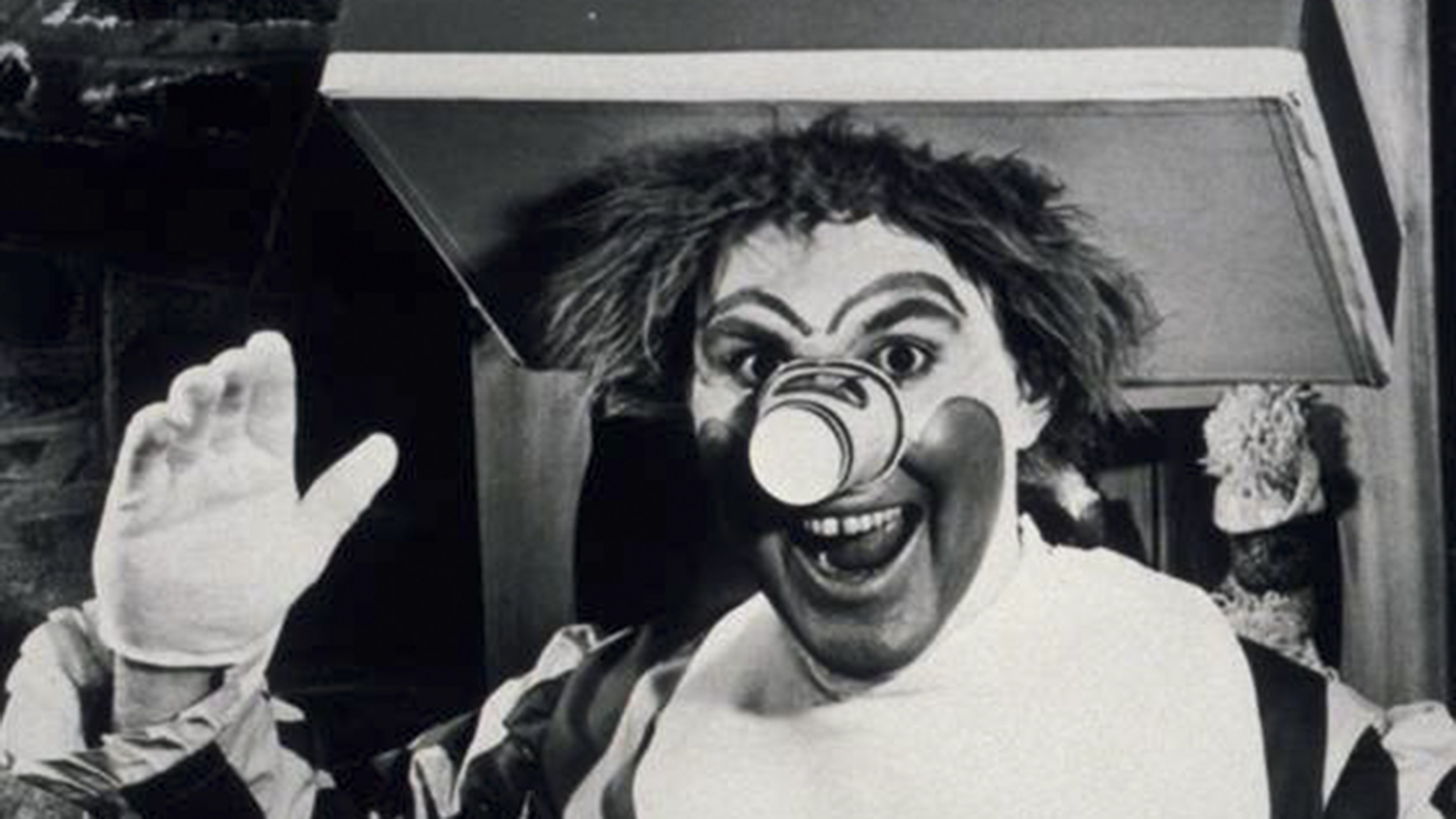 posted on Sep, 24 2016 @ 06:11 AM
link
You guys are all laughing but I guess you aren't aware of the 'creepy clowns' that keep appearing in the woods offering stuff to kids to come with them. Some have been carted off only to return unharmed.

This dog and pony show is just to put the people at ease. This is a real event / phenomena and my bet is its related to some 'you know who's...

This dog and pony show is just to put the people at ease. This is a real event / phenomena and my bet is its related to some 'you know who's...

Please explain further, I don't understand what you are getting at

posted on Sep, 24 2016 @ 06:39 AM
link
a reply to: corblimeyguvnor
Wearing a mask in a public place is illegal? WTF? Anywho, clowns don't bother me. I like them. I actually knew one. I know some people who are seriously freaked out by them though. 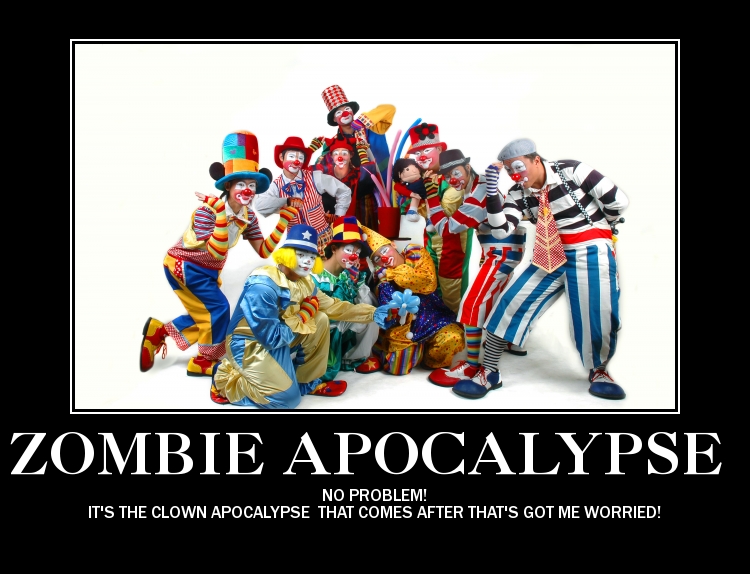 posted on Sep, 24 2016 @ 06:40 AM
link
I strongly believe that clowns are evil and want to take over the world. In fact they are more evil that cats, which is no small feat considering that cats are the devil's spawn.

This is where my problem started

And it pretty much is everything with a mask..