posted on Sep, 23 2016 @ 10:21 PM
link
This just goes to show that as surreal as this election season has been, it can always get a little more bizzare. In an interview with NBC/MSNBC's Kasie Hunt, Johnson was explaining his belief that if he were to get on the debate stage with the nominees, he could pull even with Trump regardless of his own debate performance.

And then this happened...

For those who can't or do not want to view the embed, Johnson proceeded to stick out his tongue while continuing to speak. I believe what he said was:

"I think I could stand up there for the whole debate and not say anything and emerge as the leader." 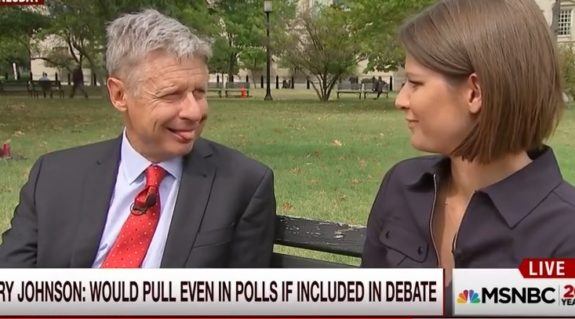 He looks to have been joking to indicate he could match trump in the debate even if he talked like that.

posted on Sep, 23 2016 @ 10:35 PM
link
That definitely comes off as... awkward. But I think he was just pointing out that he could even be silly or idiotic at the debates and still look like a better candidate than Hillary and Trump. At least that interpretation goes along with the things he was saying before he did it. It would've made more sense if he'd just said "I'd be a better candidate than them even if I did the entire debate like this" before sticking his tongue out.

I get that it was supposed to be funny but... ehhh. I'm guessing it seemed like a much better idea in his head.

originally posted by: theantediluvian
a reply to: interupt42
a reply to: enlightenedservant

I get that it was supposed to be funny but... ehhh. I'm guessing it seemed like a much better idea in his head.


Cant disagree with that, no doubt he didn't expect it to execute like that.

Definitely. In real life, I usually try to forewarn people before I do something like that lol. Or at least give them some nonverbal "head's up" that I'm playing around. I'm thinking a longer version of the clip might have him explaining that he was just making a point.

How is that any worse than the antics that Trump does both on stage and to reporters?

I'm not saying it was a disgusting display of depravity. It just came off really odd.

Let the Trump bashing begin!
edit on 23-9-2016 by sirlancelot because: (no reason given)

posted on Sep, 23 2016 @ 10:51 PM
link
With a major majority focused on Trump/Hillary, can the majority even say they are familiar with this candidate and his mannerisms etc. Probably not.

To dismiss him as inibreated is unfair and more than likely, he's aware of the futility of his run and yet he knows if given a chance to debate, he would wreck the other two clowns on common sense alone.

Allow him to enjoy his moments...it's not easy to be a third party candidate against the "machine". Hopefully, we may as a country throw aside the current and festering two party paradigm in the very near future and elect one of "US", instead of "them".
edit on E30America/ChicagoFri, 23 Sep 2016 22:53:57 -05009pmFridayrd10pm by EternalShadow because: correction

I actually wasn't accusing him of being literally inebriated. It's a figure of speech. Know Your Meme: Go Home, You Are Drunk

That was oddly entertaining. He should certainly take enlightenedservant's advice. Give advance notice to an antic such as that, especially when running for POTUS.

It's a sad state of affairs when our candidates are so bad (and that includes Donald Trump, the worst major party nominee in generations) that Gary Johnson seems like a good idea.

It's not just his ignorance of geography and foreign affairs that I'm speaking of either. Don't let his friendly demeanor you. The LP platform is a littany of bad ideas whose sole purpose is to enrich oligarchs. Period. The end.

He might seem like an innocuous good natured if somewhat feckless alternative to the identity politics, vitriol, rancor etc of the major parties and I'm not saying he's dishonest or evil but the LP platform if it was put into practice would be horrendous.

posted on Sep, 23 2016 @ 11:32 PM
link
We have one candidate that should be prosecuted for mishandling classified info and another candidate that seems to think government force is the answer to all problems and probably even got a few pointers on how to deal with the government and media from the Clinton's themselves.

Then you have this guy Gary Johnson who is the former two term Governor of New Mexico that balanced the budget. He's pro Fair Tax, anti-War on Drugs, is a military non-interventionist.

Out of the folks running for president I'd say he's the most capable out of all of them, IMO.

posted on Sep, 23 2016 @ 11:36 PM
link
That moment when you realize the OP is phishing for Hillary votes by discrediting all other candidates....

Clever. The world moved on from the "priceless" meme a few years ago. Also, it would still just be fishing as in:

How adorable, you're fishing for stars.
edit on 2016-9-24 by theantediluvian because: (no reason given)