Cruz Hops On The Trump Train

I heard that Lyin' Ted is hopping aboard the Trump Train — last stop, Betaville. I heard that somewhere. I dunno folks but that's what I heard. Nobody is reporting it on ATS yet. Ridiculous right? Ridiculous.

The guy is a basket case. Very unhinged. That's what everyone says about Lyin' Ted.

What do you expect folks? Have you heard about Lyin' Ted's father? What a disgrace. So many people are upset with Lyin' Ted's father. He was with Lee Harvey Oswald prior to Oswald's being, you know, shot. That was reported and nobody even talks about it. It's true folks. I mean, the apple doesn't fall far from the tree right? Worst thing that's ever happened. So sad. So many people are angry about that.

Lyin' Ted says he's a "constitutionalist" but Donald Trump knows more about the Constitution than Lyin' Ted, believe me. Lyin' Ted was a big fan of Roberts right? Can you believe it folks? Justice Roberts gave us Obamacare. Might as well be called Robertscare! Loser. Very disgraceful. Worst thing that's ever happened in the history of this country.

What a fail. Have you seen his wife Hiedi? Her name should be "Hide-me." She's no Melania. That's what everyone says. They do. I don't say it but they do. You know what else they say? A picture is worth a thousand words: 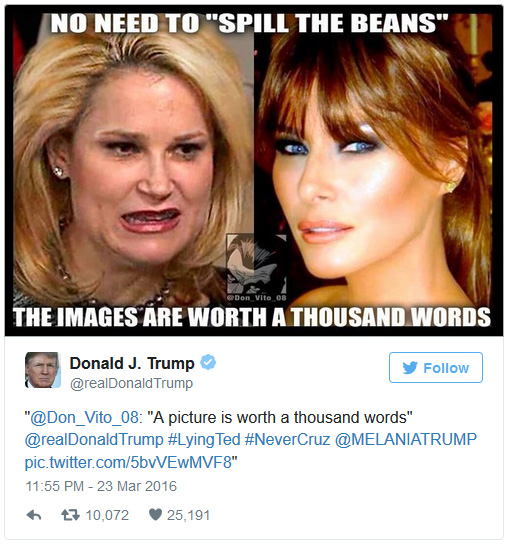 There are things about Heidi that I don’t want to talk about but you can look. The Enquirer reported that Lyin' Ted cheated on his wife with many women. Many women. So many women. The Enquirer gets it right a lot. They don't have a Pulitzer but they should folks. They really should but it's a rigged system. So unfair how they cheat like Lyin' Ted.

Right folks? Remember that? Lyin' Ted cheated in Iowa. He couldn't win straight up. Total voter fraud. Total fraud. Such a rigged system. The voting is very unfair. Worst it's ever been in history.

It's good that Cruz has come around. Nobody likes Lyin' Ted but he knows when he's lost. Now he's spilling the beans in his pants. That's okay though folks, Trump gets along with everyone. He's the most forgiving person in the world. That's what everyone says. He doesn't care if Cruz called him an amoral, narcissist, philandering, pathological Liar. Lyin' Ted said that? That guy is such a liar. What a yuge liar.

It's a good thing that Trump is such a tremendously generous and forgiving person right? Cruz probably would have been disqualified from being President. He's not a natural born citizen. It's not a settled matter. That's what a lot of the best lawyers in the world are saying. I know them all. But maybe Trump will nominate him for the Supreme Court instead of that Thiel guy. There's something about that guy right? Something. I dunno folks.

Congratulations Lyin' Ted. Now you can make America Great Again too! (and it only cost you any vesitgal shred of dignity you may have had)
edit on 2016-9-23 by theantediluvian because: (no reason given)

posted on Sep, 23 2016 @ 02:41 PM
link
Of course the useless political whore will, did you ever really expect anything more from a "person" like Creepy Cruz.

Was just reading about this, I have to say I am a bit surprised. After the way those two went at each other I didn't think he would ever do this. I would of liked to see him not, just like I didn't want to see Bernie endorse Hillary but I get why they have too.
Cruz is looking to protect his seat in 2018.

It's the only way to make sense to his buffoon cult.

Betas to the back!

It's one thing that Donald Trump implied that he was disqualified from being the nominee because he wasn't born inside the US and called him a liar roughly 50,000 times but Trump talked about his wife. Repeatedly. Now he's endorsing the man?

Lying Ted Bowing down to Trump.

posted on Sep, 23 2016 @ 03:33 PM
link
Aren't Cruz and Kasich the two most important of Trumps former opponents to get endorsements from? And of those two, Cruz's endorsement is better than Kasich's would be, IMO. (Kasich is still bitter.) Jeb? He's a daddy's boy.

You could actually be a speech writer for Trump and it would still sound exactly like him!! That was hilarious!!

Sanders loves his family, he doesn't want to see one or more of his family members get "depressed" about him not beating Clinton and killing themselves.

Probably protect his money over his seat.

Yeah, what a weasel. I almost had respect for him when he didn't endorse Trump but here he is, bending the knee. What a weak man, bending to another weak man. The whole thing is disgusting.

Meanwhile, in other news, Glenn Beck was rushed to the hospital due to heart complications.

It is sad that actually keeping a promise is so newsworthy.

At least he has more integrity than hillary-supporter Bush.
edit on 23-9-2016 by Deny Arrogance because: (no reason given)

posted on Sep, 23 2016 @ 04:31 PM
link
Of course he does. If he has any chance at a Presidential nomination in 2020 he needs to bow down and take it like a good little mainstream politician bitch.

What's so great about giving your word to support a political party's nominee regardless of how you feel about whether or not that person would be a better president than another nominee or if anyone of them are even worth voting for at all?

Seems like overtly flaunting one's loyalty to party over country.

posted on Sep, 23 2016 @ 04:42 PM
link
This shows that Cruz now thinks it's likely that Hillary Clinton would lose this election.

Because of Trump's age it's possible he'll be a one term president, with his endorsement he's now in the seat to run in 2020. If he thought Hillary would win, he wouldn't have made this move.

I'm sure Cruz also thought that he stood a chance of winning the nomination as well and that didn't happen either.