posted on Sep, 22 2016 @ 06:21 PM
link
Before I get started, I must say that I disagree with the statement in the title. Destruction of property can be justified in a protest, so long as the property you are destroying is directly involved with what it is you are trying to protest. Now, on to my point; I was just scrolling down my wall on Facebook, and someone who I don't agree with 99% of the time politically (because they're a proponent of communism/socialism in the U.S.) posted this picture:

You see, the Boston Tea Party was a protest against outrageously high taxes on the imported goods the colonists could only purchase from Britain. The tea they threw into the harbor was still in the cargo aboard a British trading ship. It had not been sold yet, and therefor had not been taxed yet. The act of throwing it into the harbor ruined the tea, and therefor it could not be sold or taxed, cutting that much off of Britain's revenue from the colonies.

If BLM's purpose is to bring attention to and stop senseless killing of innocent black people, then looting Walmart, burning cars, and smashing windows isn't justfied whatsoever. If you were protesting the evils of crony capitalism, then maybe, but since you're protesting police using unnecessary force against blacks, then this destruction of property is illegitimate.

The only possible destruction of property I can imagine that would support the cause of BLM in this case, and I am not making a suggestion and do not advise this, but stealing police weapons and destroying them could be justifiable, as it is destroying the police's means of unjustified killings. I doubt anyone can get close enough to a policeman's weapon without the policeman using it on them, however.

This has been a public service announcement. 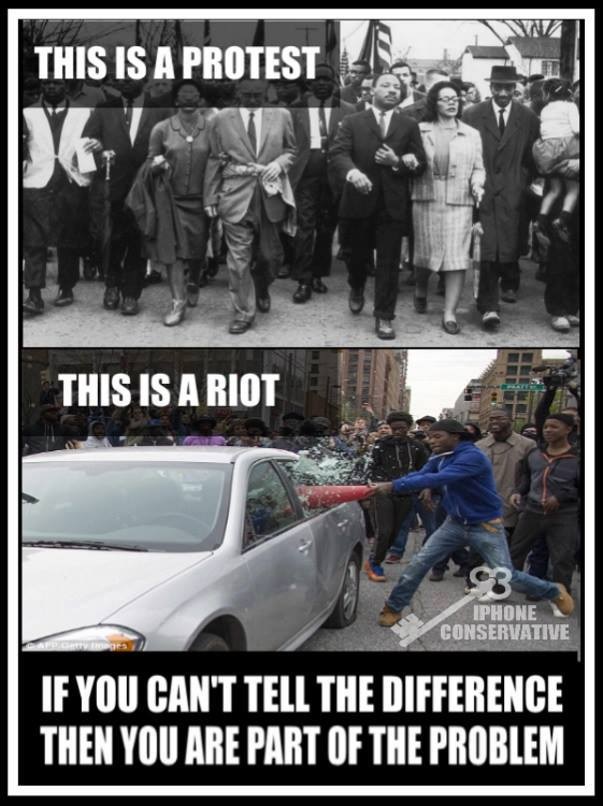 posted on Sep, 22 2016 @ 06:36 PM
link
Sometimes I wonder if the people who protest by destroying cars, own a car themselves. Probably not because they sure as hell wouldn't want someone to do the same to their vehicle. Or maybe they do own one, but in the heat of the moment all logic goes out the window.

MrBlaq
+8 more
posted on Sep, 22 2016 @ 06:44 PM
link
It's not only destruction of property, as the recent rioting in
Charlotte has several videos of white people being
pummeled. The level of ignorance with some of these people
is beyond description.

originally posted by: MrBlaq
It's not only destruction of property, as the recent rioting in
Charlotte has several videos of white people being
pummeled. The level of ignorance with some of these people
is beyond description.

I agree with that with the caveat that there are those who like a shebang anyway, I have seen that too often and only confuses the issue unless you know them. I don't think though that media helps either et al with just pictures and not much else.

posted on Sep, 22 2016 @ 07:18 PM
link
Just sad the media had to force racism onto society to decide us. I know theres always been a small problem of racism but we'll always have ignorant people.

But this time they sensationalised the story before we even have facts. They also didn't mention much the cop was black to use people's emotion as a hook for more viewers. I say we give the media the bill for the destruction in Charlotte.

Let the rioters loot and destroy everything.

After they are done, ask them, "What are you going to do now?"

Or the store owners could sit in their shops tonight with an AR and extra ammo. That would probably make people hesitant to loot.

Sorry. You can't protect your property or your life.

Those who came to peacefully protest are another.

Painting them all with one brush because of what some did is rather...ignorant.

I am very surprised that some of those who were stopping cars, opening doors and basically hijacking people, are still alive today.
I would never want to to have to hurt someone, but you Are Not stopping me and getting in the car. That many were not ran over or shot is, to me, a miracle.

Yes and isn't this thread about the difference between the two?

This is about when protest becomes riot and loses any sympathy it might otherwise have had.

Understand that the protest and the riot are not synonymous with the people in them, but the protester trying to make a point in a riot is a lost cause.

Though as others have suggested, there is a difference between protesting and rioting.

But all of that aside, I would argue that there non-violent protests are simply more effective.

People dont understand how much power we really have in simple non-compliance.

The violence serves as a deflection.

Yes, and I was agreeing.

Violence is the protest of last resort or it should be.

People talk about revolution, but in the end, you have to calculate that the risks and chaos of revolution are worth it as compared to what you are seeking to replace.

Because if you go the route of revolution and fail, it will go worse for you. Even if you win, there is always the chance that what you end up with turns out to be worse than what you had. Look at post Revolution France and the Reign of Terror.

posted on Sep, 22 2016 @ 09:02 PM
link
Sure, there is a difference between protesting and rioting. Those that are causing mayhem are rioting, but there are others who are attempting to protest peacefully. I'm not trying to paint them all with a broad brush here, but I'm sure you're familiar with the saying "a few bad apples spoil the bunch". That's the same thing happening here.

When an innocent man is killed (of any race) by the police and the officer faces no penalty for doing so, yes there should be protests.

But vandalism and larceny that is not related to the killing is not protesting, and the message that image I shared is trying to portray is that it is justified because vandalism has been used in past. This vandalism is not justified because it is not related to the incident that is being protested in the first place. Instead, it's those bad apples taking advantage of the situation, and using it to cause unnecessary chaos because they can get away with it in such large numbers, and for their own gain through looting and theft. That is uncalled for and has no relation to the shootings.

posted on Sep, 22 2016 @ 09:44 PM
link
you`re right, destruction of property isn`t a form of protesting it`s a form of revolution. your facebook friend was wrong,the boston tea party wasn`t a protest it was one of the seeds of a revolution.
edit on 22-9-2016 by Tardacus because: (no reason given)

originally posted by: Tardacus
you`re right, destruction of property isn`t a form of protesting it`s a form of revolution. your facebook friend was wrong,the boston tea party wasn`t a protest it was one of the seeds of a revolution.

Yes, but in order to revolt successfully, you need the sympathy of a large enough chunk of the non-revolting populace and the existing established power structure.

This needs to at least be between 30 to 50% of those areas to have a chance of success.

Right now African Americans are themselves about 11 to 13% of the population and not all of them are in sympathy and while they have some prominent voices in government, I am not seeing near that amount of support spread among power structures.

So this is a riot and at the moment doomed to failure.