The Layoffs Begin: The Clinton Foundation Awash in a Sea of Scandals

page: 1
32
<<   2 >>
log in
join
share:
burntheships
+9 more
posted on Sep, 22 2016 @ 01:42 PM
link
As the Clinton Foundation's scandalous dealings continue to
be exposed, the Clinton's have found themselves facing a backlash
of liabilities from their pay to play agenda while taking
advantage of their political offices.

Amid waves of controversy, Bill Clinton has gone on the defensive at the "last"
Clinton Global Initiative Gala, the once annual ostentatious event of elites
being second only to Davos in Switzerland.

The former president views the final glitzy meeting of his Clinton Global Initiative — which he will address on Wednesday in an emotional farewell — as his last big opportunity to counter accusations that the philanthropy served as a vehicle for wealthy foreign donors to curry access with his wife’s State Department.
www.politico.com...

Following the last CGI event on September 21, reports began surfacing of dozens
of employees given notice of lay offs, some already leaving for positions elsewhere.

Starting in August, CGI staff members began learning they would have to find new jobs by the end of the year, according to Politico. It's unclear how many people will be losing their jobs.

Hillary Clinton, the Democratic presidential candidate, has faced scrutiny over reports that many people Clinton met with while she was serving as the US secretary of state were individuals who made donations to the foundation.
www.businessinsider.com...

Some employees have less than nice things to say. A CGI moderator, Adam Davidson,
whom is a journalist, writes for New York magazine and hosts a show on NPR, said
that many of the events are “all about buying access", calling them disgusting, creepy and gross.

Perhaps more will come forward and tell their take on this pay to play scheming?

However with all of the attempts of appearances to become
ethical, while running for office Secretary Clinton will continue
to allow foreign donations to The Foundation. This leaves
the Clinton's facing a sea of criticism, even from their staunch
liberal supporters.

A wiser course would be to ban contributions from foreign and corporate entities now. If Mrs. Clinton wins, Bill and Chelsea Clinton should both end their operational involvement in the foundation and its affiliates for the duration of her presidency, relinquishing any control over spending, hiring and board appointments.


Is this all just smoke and mirrors to appease critics?

Or are we seeing the unraveling of the once "great" Clinton Foundation?

Related Thread:
More Than Half The People Clinton Met with at The State Department were Clinton Foundation Donors

So as SOS those questions are NOT 'fair'?

What pay for play?
There is none. Don't you guys own tv's???? Trump is the pay for play champion. Trump who spends OPM OTHER PEOPLES MONEY
Sorry. But really.
These stories always ask the question. Will this be the smoking gun???. Blah blah and then don't provide one instance where there was pay for play.
Why can't they provide even one instance of wrong doing? Where is the damn gun anyway?

The guy who seems to have the most information on how that goes is trump. The true pay for play gamer.

Agreed, what an amazingly out of touch response he gave...
I don't think the Clinton's lashing out at Americans is going to work for them.

As if they could squeeze any more blood if they turn nasty?

So much dirty activities happening.

All liars eventually get caught.

Seems the organized sections of the Family are walking on moist banana peels.

posted on Sep, 22 2016 @ 02:01 PM
link
The Clinton Crime Cabal had sure better hope it's intimidation techniques are up to snuff because if any of those people receiving pinks slips happen to have any amount of disgruntlement, more details may become known.

Stosh, the phrase "Clinton logic," is self defeating don't you know? Just look at the silly people who drink the koolaid and sell the cloth.

What pay for play?

Well my dear, it is thinly veiled Fascism.

Fascism, classically is associated with authoritarian (governmental) control over the private sector. And certainly pay-to-play comes close to that. The government makes it possible for a specific institution or individual to carry out a given task or service that others have no possibility of performing.

In Hillary’s case, pay-for-play was made possible by the Clinton Foundation. It seems that those who sought her influence or Bill’s influence with political issues could make a donation to the Foundation in return for receiving special treatment. www.zerohedge.com...

And Clinton would continue this if installed into the House.

originally posted by: Sillyolme
a reply to: stosh64

Obviously, if they had nothing to sell, they wouldn't
be removing themselves, and closing up shop,
now would they? 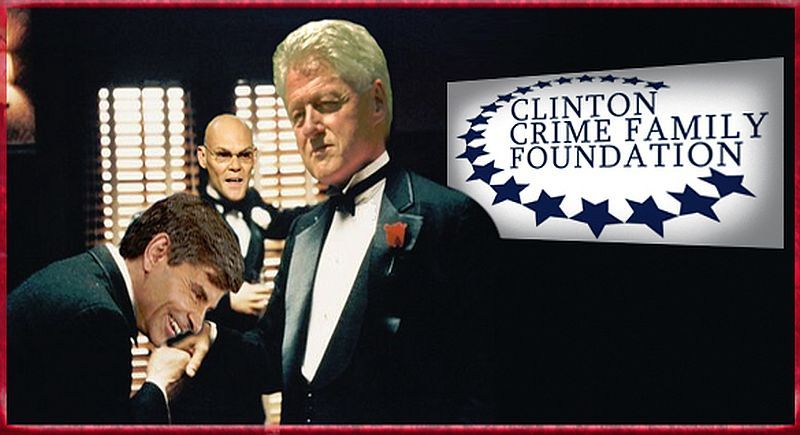 Some employees have less than nice things to say. A CGI moderator, Adam Davidson,
whom is a journalist, writes for New York magazine and hosts a show on NPR, said that many of
the events are “all about buying access", calling them disgusting, creepy and gross.

Yuh left a bit out...maybe you missed it!
Davidson,

“I don’t think this is a story of pay-for-play. It’s more a story of an overzealous Foundation using all tools at its disposal to raise funds and awareness. It’s creepy, as I said. I don’t like it. But it’s not illegal or evil or disqualifying.”

originally posted by: burntheships
a reply to: smurfy

your bias is creepy

But at least I am keeping good company with
it in this case, all of the mainstream news
accounts all match up.

In 2013, Comey became a board member, director, and Financial System Vulnerabilities Committee member of the London bank HSBC Holdings for a term of three years. Howley notes that “HSBC Holdings and its various philanthropic branches routinely partner with the Clinton Foundation. For instance, HSBC Holdings has partnered with Deutsche Bank through the Clinton Foundation to ‘retrofit 1,500 to 2,500 housing units, primarily in the low- to moderate-income sector’ in New York City.”

The green energy scam is a favorite among the elites, in this case it was the basis for a retrofitting pilferage of immense proportions, involving “$1 billion in financing,” according to Clinton Foundation records.

This, too, might be a "retrofit project" connection....if you know what I mean. Exposed

Both of the above articles are worth reading and thinking about in light of the current climate involving the overlooking of evidence by a certain alphabet agency.

originally posted by: queenofswords
He made sure to protect those retrofit projects, didn't he? (mentioned right around the 1:22 minute).

Ah, very great find there. He looked absolutely shifty eyed talking about that.