28 Page Report on Saudi role in 9/11 and the Discovery Action process for the FSIA.

posted on Sep, 20 2016 @ 10:07 PM
link
Thank you every one for reading this. This is my first post on ATS and I hope it’s subject matter is of merit to invite serious discussions. For those of you who are actively collecting information on the Saudi Arabian alleged roles in mobilization effort of the 9/11 attacks, this post deals specifically with the discovery action for claims made under the Foreign Sovereign Immunity Act or hereafter F.S.I.A.. A discovery action in civil law often refers to the collections of “books, documents and papers,” to presented in court. These usually start with a initial F.R.C.P. disclosure between the petitioner and respondent.

This thread is about the collection process for many numerous persons who may under recent legislation by the House of Representatives pursue cases against the Saudi government using the F.S.I.A.

For those of you unfamiliar here is a link to Washington Post article about the subject matter.

www.washingtonpost.com...< br />
This thread will start very simply by a single supporting document and case to help the victims establish a pattern with the Saudi mobilization process.

I handled much of this case from inception and the time in the U.S. Navy with Security Detail and the case of Osama bin Laden's relatives as instruments aiding and abetting and their impact on mobilization of Saudi Citizens involved in 911.

The E-mail below is recent and is critical in establishing what rights attorneys have for victims of terrorism to collect data in the cases pursued under the F.S.I.A. This case is real and in the public domain. Supporting documents are also included that indicate the U.S. NAVY has opted to not pursue investigations into the laden siblings and saudi dynamics due to presume the official narrative by Ray Mabus the Secretary of the Navy and his opinion on the Saudi papers implication of elected officials.

The following e-mail is in complete as it was sent to Boston PD Internal Affairs and directly subjects critical collection process of evidence of Saudi Citizens who may have aided in mobilization as case supporting evidence.
-----------------
NOTE WAXMANS INITIAL REQUEST REGARDING SAUDI SUPPORT NETWORK: In 2002, I served aboard the U.S.S. Constitution and conducted an investigation into the Saudi Mobilization process of the family members of Osama Bin Laden. While most of Bostonians were aggravated after 9/11 attacks and the immediate removal by F.B.I. PAID FOR TRAVEL to Saudi Arabia was made, I continued to conduct inquiry into mobilization process of Saudi Mobilzation. Recently with the 28 pg. report on the Saudi Mobilization new focus on this issue has re-emerged. I am asking if your office will help my case integrate into BOSTON SPEC ops for procurement of the property previously owned by Laden sibling in Flagship Wharf. (NAVAL SECURITY DETAIL 500 yards The President is going to veto house bill to allow family members to sue the Saudi government for state sponsored terrorism and the "aiding and abetting," role in the Foreign Sovereign Immunity Act making private citizens who were victims of 911 suppressed. His reasons are suspect as both the SECNAV Ray Mabus and his job as Saudi diplomat have covered the operation with Laden from their inception. Be that from the origin of the Afghan Service Bureau payments to target Russian operations of the G.R.U. in Afghanistan to the point at which Saudi support networks such as the laden sibling case emerged in Boston.

The specific reason I am asking for your support in this is that if BOSTON PD spec op acquire property they can address logistics from Charlestown navy yard as RAY MABUS and N.C.I.S. should in support of case but as recently have opted to stop case under the same pretext of the presidents Veto of bill. IF BOSTON PD acquired laden sibling property as part of tax seizure through state and does not opt to sell it under reclamation then the property may address LOGAN AIPORT angle of mobilization of Saudi cell.

The allegations have come under numerous fire as that the U.S. MILITARY placed Ladens under special counter surveillance program to observe KNOWN ADVANCED KNOWLEDGE LOGAN attacks to the exact inverse which argues the use of laden siblings in 500 yard of naval security zone enabled the counter-surveillance missions as appropriations schemes. Meaning, to place a counters surveillance mission is to appropriate a budget and that budget may be part of mobilization scheme.

This right of BOSTON PD and it’s sovereignty as s state not under federal jurisdiction may enable the right perspective of LOGAN MOBILIZATION aspects of cell from Saudi Arabia and as such further enable Boston to question the reason for SOFT TARGET region of BOSTON.
If only by your example of excellence to acquire property to subject the exact same counter-surveillance mission to scrutiny that it would be admissible in supporting the 28 page documents for victims of 9/11 attacks. If your special operation were to procure as safe house other instrument of utility the LOGISTICS files may migrate to BOSTON in event 28 page report is released.
Thank you sir,

I have also included other e-mails and communication regarding the case and the relevancy of 28 pg. report to current US-RUSSIAN AFFAIRS as two cases were handled in investigation. The larger overarching is U.S./Russian bear bomber exercise on 9/11 morning and how Al Quida ran by Saudi mobilization cell from initial budgeting by Afghan Service Bureau of laden family then by 1984 emerged to attack United States.

THE U.S. NAVY FORMALLY DENOUNCED dd0149 through naval board of correction then the presumed issue is that SAUDI MOBILIZATION threats root to diplomatic roles in Saudi Arabia. 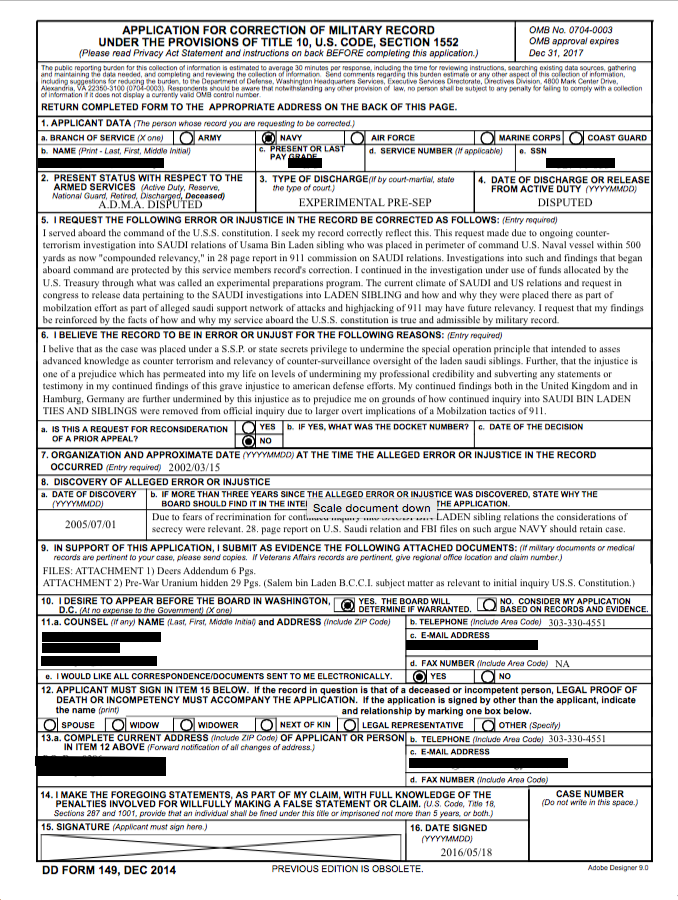 If FSIA claims against Saudis from house bill proceed vital evidence is lost if custody chain of site is impacted or logistics impacted. The determination of custody chain is to determine role of NCIS and PERIMETER surveillance issues after U.S.S. COLE BOMBING as the role of increasing in port threats to ACTIVE DUTY VESSLE were logistics in and of themselves. Meaning the siblings placed at FLAGSHIP WHARF may be considered elements of SAUDI MOBILIZATION. But I'm sure BOSTON SPECOPS knows who had counter-surveillance mission observing laden siblings in HOPES TO acquire LADEN contact-after YEMEN bombing. Note: while claims in FSIA cases will INCLUDE the MOBILZATION issues of  Mohammed M. Bin laden as ELEMENT OF MOBILZATION TACTICS the larger questions will be directed in CIVIL LITIGATIONS as to WHAT IMPACT it made on LOGAN HIGH-JACKINGS as facts of claims against SAUDI SUPPORT NETWORK of laden siblings. This discovery actions in FSIA will proceed without BOSTON PD support but presuming BOSTON PD under AP 631 631.2.3. Sale of Seized Assets for BOSTON SPECOPS control then BOSTON could in fact support claims in FSIA cases for victims of 911 in house bill.
www.nytimes.com...
edit on 20-9-2016 by VelaDeDrick because: (no reason given)
edit on 20-9-2016 by VelaDeDrick because: (no reason given)