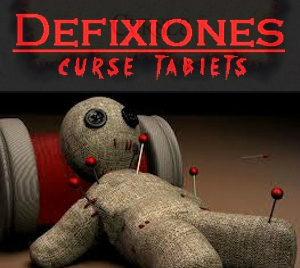 
As the month for ghouls and goblins approaches, I thought it would be fun to try and make a Poppet. Which, for those who do not know, is a doll similar to a voodoo doll, but different as it is used in sympathetic magic. As always, its purpose is defined by the intent of the person making it. The ones I'm making do not hold any magic within them...they are made with the intent of being gifts only.

That's not what I wanted to share with you though, really no reason for bringing it up other than while searching for those I came across other artifacts from ancient Greece and Roman days that peaked my interest. Ones that I had not heard of before and so, while I was learning about them myself, decided to take a few notes and share...

Described as thin sheets of metal (usually lead) that were rolled into balls and had nails pierced in them. Sounds pretty ominous ..yes? Well, they kinda were. Over 1600 have been found, the earliest dating back to the 5th century BCE. Yep, even back then we couldn't get along. And one of the ways we decided to seek revenge upon one another, or get a "leg up" in life, was to make a curse tablet.

Thin pieces of lead or metal, with a powerful curse written upon them, rolled up into a ball and pierced with nails, then thrown into deep water or left at places that held supernatural importance (graves, sanctuaries, known cursed or haunted spots)

An interesting fact is that the lead stolen from the water pipes was thought to be most powerful. The cold temperature plus being so close to water was believed to make it a more powerful. (water being an element that enhances the power of the spell, thus why they would throw the lead ball into deep wells and oceans.)

The inscriptions written upon them were used to both curse an individual or as a binding spell, but all spells were used to the satisfy a personal desire or for personal gain. Many were used to gain the love/heart of another.

Magicians mostly crafted the defixiones, They used the making of them as a way to make a living. There were instructions on how to make them and prewritten spells that could be used. As the ceremonious act of making one depended greatly on what curse or love spell you wanted to employ, most people would simply tell the name and the curse they wanted to a magician, and the magician would then craft a defixio up. Of course the magician charged a fee for his work.

The magician would use incantation while carving out the words into the lead, sometimes writing the name of the victim in reverse, to invoke the spirit or ghost that was needed in order to fulfill the curse. Pictures and mirror writing were often used as well. A defixio that was thought to be the most powerful was accompanied by Kollosoi or voodoo dolls. (This is how voodoo dolls lead me to curse tablets..told ya it all fit in)

And example of a sample spell:

Agoge I: [For any place], either home or workshop. [it attracts a woman] to a man. The same one [makes them steadfast] and faithful: Take a leaf [of lead] and with a nail write the figure while saying [the name that follows and]: ‘I shall burn up the house and the [soul of him, NN, to] cause desire for her, NN, whom NN bore, whom NN bore, as Typhon did [not] allow Osiris to find sleep. For I am [master of] VM. Fulfill this for me, all-brightener, august bight-bringer [of gods and daimons].’121


The inscriptions were used for many different things. To win a judgment, competition, love, lust, curse an enemy... really, you could have one written up for just about anything. And anyone, no matter what their station was, had access and used curse tablets.

Some of the great works by Plato, Hesiod and such mention the art of making a curse tablet and provide their thoughts on the process and magic behind them.

But let us address those who take up the wild belief that the gods do not care or are placable, those who, in contempt for men, charm the souls of many of the living, by alleging that they charm the souls of the dead. They undertake to persuade the gods, through the practice of sorceries with sacrifices and prayers and spells, and try to destroy the root and branch of individuals and entire houses for the sake of money. The court should punish one judged guilty of these things with confinement in the inland prison; no free person should approach him, but slaves should be used to provide him with the ration of food decided by the guardians of the law. When the convict dies, he should be cast outside the boundaries unburied. If any free person colludes in burying him, he is to be liable to an accusation of impiety by anyone who wishes to make it.”- Plato 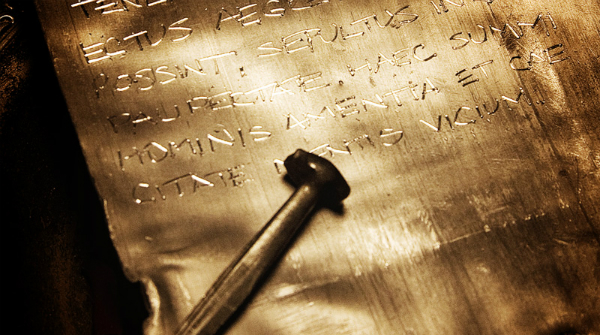 A detailed description of the process in making a cursed tablet can be found online easily, including some spells. Here I will be just giving a very basic idea. The art of crafting one changed many times throughout the ages. Starting with the names roughly carved into metal and placed within graves. Then the spell/ritual becoming more complex and "wordy".

After the inscription was placed upon the tablet, the lead would be rolled up and pierced with nails. Twisting the cursed souls fate with that of the invoked spirit. The nails binding the two more securely together as one and ensuring that the curse held. (made it more permanent) Also, water held significance in some spells, to help communicate with the underworld and aid in the sympathetic magic.

Lead stolen from city water pipes possessed more intrinsic magical value because it was colder, touched underground water, and because, as Ogden, explains, “It is common for ancient magical ingredients to be either extremely dangerous or difficult to obtain.”51 Moreover, lead was ideal when casting sympathetic magic. Similarities drawn upon the inanimateness, temperature, and color of lead increased the efficacy of the spell;

Often, water provided an effective resting place for curse tablets, and not only because it aided in sympathetic magic by chilling the victim. Several spells illustrate that specific amatory curses required submersion into the sea as a method of reaching out to the goddess born of sea-foam, Aphrodite, goddess of erotic love. Wells and springs were also common dumping grounds. Placing the rolled tablets into wells signified further efforts to communicate, not bind, for the magician was placing the tablets near to the Underworld by sending them literally underground.79 Sherwood Fox discusses the efficacy of drowning the tablets, stating The symbol, whatever it was, was inscribed with the victim’s name. Now to the worker in magic the name is the man himself. The submersion of the symbol is, therefore, the submersion of the man, and the longer the symbol can be kept under water the more permanent will be the victim’s plight. Hence it was desirable to hurl the symbol far out into the current of a stream where it would be safely hidden and subject to rapid corrosion. But it was still more desirable to cast it into the deep waters of the sea where the eye and hand of man would not reach until the day when the sea will give up its magically as well as its literally dead.


Incantations and ritualistic behavior became important later on as the art of curse tablets developed. And, for all intents and purposes it was an art. Using pictures and chanting incantations while writing out the curse, sometimes the magician had to do so in privacy, sometimes he had to do so in the presence of the cursed or curser. Symbols sometimes taking the place of a spirits name, each letter or symbol carved while the magician repeated the deities name or a word of power over and over again through the whole curse making process.


There ya have it..a small introduction to the history of the curse tablet. There is a ton more information out there if you google the term. But the most complete that I've found is the link listed below. I imagine I will make one of these as well. But the intent will be one of healing or love..not to bind or curse anyone.


As always, thanks for reading and I hope you found at least some of the information interesting or useful.

You are a creative soul - very cool idea. I'm excited about Halloween's approach. Whoever is receiving your gifts is very lucky - I hope they truly appreciate the time and effort you put into them. S & F

I am also looking forward to Halloween.

Thanks for the 'spooky' read.

Thanks..they are birthday gifts. I hope they like them too.. Just got finished with the doll..just need to decorate it a bit and then have to go get some metal for the "curse tablet"..

Not really sure what kind I should use..have to look that up .

I love Halloween as well. This year if all goes well, I will be celebrating it in the UK. So, a ton more fun then usual hopefully.

Thanks for reading and responding.