Long-time no speak. Anyways, i am not sure whether or not i buy into the whole Mandela Effect thing or not...I remain sceptical in that I suppose it’s possible, but also most probably not likely. Anyway, my 7 year old son was staying at his Nana's house for the weekend and i was asking him how he enjoyed his time there. He told me that he watched Back to the Future III again as it’s his favourite. I have seen them all but it’s been ages since i watched them so my memory is rusty, however, it struck me when he said...and i am paraphrasing...

I looked on Google as i couldn’t picture the guy he was talking about, i showed him some images of characters from Back to the Future III and he identified him as this guy.

Sorry guys, i cant seem to embed the picture. If someone else can that would be great.

Anyways, what say you? Is his mind playing tricks on him or is this something any of you have heard?

p.s. i have never mentioned this Mandela Effect to him, so for him to say this was a bit surprising.

It never happened, in any timeline...

If it had, the main character could he have gone back to the future.

He would have ceased to exist before that climactic ending to the film. 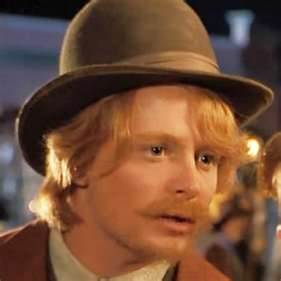 This character is Marty's great great grandfather (or the like).

A trademark of the Mandela-ites (as I've dubbed them).

Edit: I was wrong about Shamus' death impacting Marty's future. His son was already born. As pointed out by Aleister, below.

Wasn't Marty's grandfather already there, as a baby? I recall Marty holding the child. If so, then that character could have been shot and nothing would have happened to Marty as his grandfather, as a baby, is already alive.

In my timeline, the baby had not been born yet. Duh!

Seriously though, I suppose you're absolutely right!

I had forgotten they had the baby already.

But I recall that scene with Marty holding the baby now.

Shamus is against violence!

Welcome to the wonderful world of MK Ultra and PSYOPS---No mystery. Time is not being played with, It is your mind. Fukem

Yeah, I know, but for some reason I thought he was the one that went out and didn't fire, but just bad memory. I watched the clip and that's how I remember it, so...no Mandela here.

In my search for the clip I found this interesting Gem.


It's not an ME, just a great scene that contains more than meets the eye at first glance.
edit on 19-9-2016 by Aedaeum because: (no reason given)

Yeah, I know, but for some reason I thought he was the one that went out and didn't fire, but just bad memory. I watched the clip and that's how I remember it, so...no Mandela here.

In my search for the clip I found this interesting Gem.


It's not an ME, just a great scene that contains more than meets the eye at first glance.


Thats funny I just watched that yesterday for the first time in probably 20 years or more. That scene is fantastic, as is that actor. He was so F'ing good in Top Gun too. I wonder what happened to him. I know I could look on IMDB, but I prefer to imagine different scenarios instead.

posted on Sep, 21 2016 @ 03:54 AM
link
That's a new one for me. The only Mandela Effect I've heard mention in BTTF is the terrorist's white van becomes a Blue and white VW fan. But I really think people are mixing it up with the white truck that Doc used to transport the Delorean to the mall parking lot.

Then there's the VW logo, itself, of course...