Matt Stone clarified at the time that Hayes indeed left the show because it made fun of Scientology.

But according to a new oral history of the first 20 years of South Park, this might not have been the case. As Stone tells The Hollywood Reporter, they didn't show Hayes the episode before it aired because they didn't want him to be held accountable. After it aired, Stone said he came to them on behalf of Scientology to pull the episode. Four months later, he left the show.

Taken from an article at Esquire.

First I want to state that at the time that it was announced that Isaac Hayes had left South Park, I knew at that moment that he was forced to leave South Park. I had always assumed this, as it fits neatly into their Hollywood modus operandi (see project celebrity).

South Park didn't have to do much to make fun of this batsh!t cult founded by a science fiction author. They simply explained the basis of the religion with the caption: "What Scientologists Actually Believe." 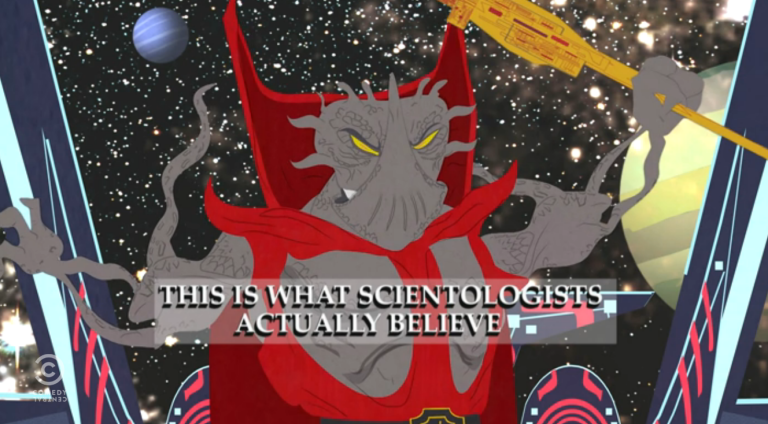 Anyway, the episode caused some controversy among noted Scientologists like Tom Cruise, who allegedly threatened to back out of his Mission: Impossible III contract if the Viacom-owned Comedy Central ever aired the episode again.

Among other enraged Scientologists was Isaac Hayes, who happened to voice the character of Chef on the series. Following the episode's first airing, Hayes publicly left the show in anger, saying in a statement, "There is a place in this world for satire, but there is a time when satire ends, and intolerance and bigotry towards religious beliefs of others begins."

The first thing that jumps out at me from the quoted section above is the link between Comedy Central & Viacom. Viacom is actually Comedy Central's parent company, and Viacom also owns the Mission Impossible franchise. So clearly there is a conflict of interest there and it's not surprising that the execs at CC were a bit intimidated by Tom Cruise's celebrity cult.

However, take a look at this quote from Isaac Hayes' son featured in the article:

Isaac Hayes did not quit South Park; someone quit South Park for him. What happened was that in January 2006 my dad had a stroke and lost the ability to speak. He really didn't have that much comprehension, and he had to relearn to play the piano and a lot of different things. He was in no position to resign under his own knowledge. At the time, everybody around my father was involved in Scientology — his assistants, the core group of people. So someone quit South Park on Isaac Hayes' behalf. We don't know who ... My father was not that big of a hypocrite to be part of a show that would constantly poke fun at African-American people, Jewish people, gay people—and only quit when it comes to Scientology. He wouldn't be that hypocritical.

Surprised? I am not.

Just like I wasn't surprised when Jon Stewert wouldn't mention Scientology when he had Tom Cruise on as a guest of The Daily Show in one of his last episodes. There was a lot of talk at the time a little over a year ago about Scientology mostly from Leah Remini's tell all memoirs and because of HBO's documentary Going Clear: The Prison of Belief.

Jon Stewert answers to Comedy Central, which answers to Viacom, whom employs both Cruise & Stewert.

Anyways, the damn cult threatens anyone at the celebrity level with disciplinary action in response to engaging in suppressive behavior. No actor in the cult can represent themselves in a project that's been declared suppressive. It was obvious to me that Scientology forced Hayes to leave South Park.

posted on Sep, 19 2016 @ 05:16 AM
link
good thread, they need to re-visit scientology episode. maybe so after Louise Therouax documentary is nearly released.

tom cruise is such fudge packer. i was not aware that they made him quit

The final Chef episode "Super Adventure Club" or whatever was about L Ron Hubbard.

Screw that mind slave and all the rest.

F all your retarded religions

This quote was from Hayes' son.

Reread the title of your thread. What you quoted is not what you are leading people to believe.

It sounds to me like he was unable to perform his job due to the medical condition that left him incapacitated; therefore, his employment was terminated by whoever held his medical power-of-attorney. This is perfectly legal and happens all the time.

If this is the case, and I suspect that it is, the fact that his son doesn't know who held the POA speaks volumes about their relationship, and puts whatever claims he may make about what happened under suspicion.

In any event, to say that "Scientology forced him to quit" is misleading, and deliberately so to suit your anti-religion bias.
edit on 9/19/16 by NthOther because: (no reason given)

posted on Sep, 19 2016 @ 05:36 AM
link
I know there were a couple of articles right after he left South Park making it known that he wasn't really involved (or might not been involved at all) in writing the clearly hypocritical statement that he was leaving South Park because they were being intolerant of scientology beliefs. If I'm not mistaken he had a stroke less than 2 months before leaving South Park and it was reported that his handlers were the ones involved in writing the statement/pretty much quit for him. I would like to think that if Hayes didn't have the Stroke he would left scientology once they put pressure on him to leave but that's more than likely just wishful thinking.

The title of my thread was taken from the source article. While this thread has since been moved, I originally posted it in Breaking Alternative News. Which, as you may know, has strict rules about misquoting the titles of a news report within the forum.

If this is the case, and I suspect that it is, the fact that his son doesn't know who held the POA speaks volumes about their relationship, and puts whatever claims he may make about what happened under suspicion.

I agree with you that it does speak volumes, but you and I are probably not hearing it at the same decibel level.

I suspect that his son knows very well who had POA over his father and that he was intentionally vague about it to avoid being declared a suppressive person.

I love when you guys turn out to make fools of yourselves in my threads.

I have another Scientology zinger that I will post later that you will most assuredly bash! Watch out for it.

I suspect that his son knows very well who had POA over his father and that he was intentionally vague about it to avoid being declared a suppressive person.

And wouldn't insinuating that Scientology forced him from South Park be enough to declare him as such already? What difference would it make if he revealed who held POA if he's obviously hostile to Scientology in the first place?

That being the case, why would he even care about being declared a "suppressive person"?
edit on 9/19/16 by NthOther because: (no reason given)

There was no ATS in existence 16 years ago, silly.

There was no ATS in existence 16 years ago, silly.


rationalwiki.org...
Above Top Secret is the internet's beehive for all things conspiracy, UFO, paranormal and just about anything crank-related. The domain was registered in 1997 by Simon Gray, but he didn't actually start developing the site until 1999.[2] Initially it was a compilation of various documents and texts concerning shadow government, the New World Order, and related theories, but it primarily focused on extraterrestrial life and alleged attempts by the government to cover up its existence. Following the 9/11 attacks, the site received a boom in popularity, has since undergone several major layout changes (the current one being quite GFX-laced, rather odd for such a website, don't you think?), and eventually mutated into one of the largest and most popular conspiracy theory discussion boards on the internet with over 9.5 million posts of, apparently, "substance".

Nowadays the site can be considered oxymoronic. It advertises itself and embraces the beliefs of the alternative conspiracy media, but it is all very stylized and the site utilizes all sorts of gimmicks to attract viewers, which really doesn't seem like a good presentation for "classified" information. One might say this is so it can be accessible to the brainwashed sheeple, so the "truth" can set them free, but is it necessary for it to almost satirize itself?
2000

I was probably lamenting the election season somewhere else that year.

They gave Mormons the same treatment.

Didnt even have to make jokes, just state there believes and it was funny.

But you dont see Mormons kicking up a stink do you?

The difference is with the LDS is that maybe at least half of Mormons are actually very religious and fully believe in the principle of spreading the Gospel. While some elements of the church may be open to inquiry I think it’s fair to call it a religion, at least it is a derivative of Christianity, unlike Scientology whose use of ‘Church’ in their name is quite offensive.

Another big difference is... one time I got collared by Scientologists in a city centre and they tried to sell me their book, they almost snatched it back from me when I said I had no money. As for the Mormons, they collared me one time as well but they just gave me a copy of their bible with no commitments implied, in fact I still have it.

originally posted by: crazyewok
They gave Mormons the same treatment.

Didnt even have to make jokes, just state there believes and it was funny.

But you dont see Mormons kicking up a stink do you?


They even went and made an entire Broadway musical about it (it's pretty damn funny). I would love to see Matt and Trey do a Scientology musical as well. It would be hysterical.

posted on Sep, 19 2016 @ 01:28 PM
link
I know a few Mormon's who've expressed their content for the Broadway musical. But so far, none that have actually tried to litigate.

posted on Sep, 19 2016 @ 05:28 PM
link
When I lived in Hollywood beside the big blue main Scientology headquarters they would always slide pamphlets under my door and stop me randomly on the street all the time and talk to me. It was almost a hollow feeling talking to some of them. Once, a guy asked me what I do for a living, I told him music, and he said, "You know, we can help you with that."