We just got done blowing up the good guys and Russia is blaming us.

AboveTopSecret.com takes pride in making every post count.
Please do not create minimal posts to start your new thread.
If you feel inclined to make the board aware of news, current events,
or important information from other sites
please post one or two paragraphs,
a link to the entire story,
AND your opinion, twist or take on the news item,
as a means to inspire discussion or collaborative research on your subject.
edit on Sun Sep 18 2016 by DontTreadOnMe because: (no reason given)

Kind of like Hillary resurrecting the "birther" situation right after her "pneumonia" collapse.

posted on Sep, 17 2016 @ 11:43 PM
link
a reply to: Kazber
All too convenient when the US violates a cease-fire agreement in order to kill the few people who are actually fighting terrorists. It was so convenient in fact that Russia called an emergency UN meeting about the incident and gave an outright accusation that "the White House is defending Islamic State. Now there can be no doubts about that".

This also comes just days after video emerged of American-backed rebels were filmed kicking American special forces out of town:Distraction from embarrassment and exposure, indeed.


And only 23 minutes to turn an interesting story into Hillary Clinton/politics.


Why are they supporting Daeash..?! o.o


That is an incredible analogy.

posted on Sep, 18 2016 @ 08:49 AM
link
a reply to: Mousygretchen
Because the enemy of my enemy is my friend, my dear! Syria is a close ally to our power competitor Russia, who even have a naval base situated there. As Russia is a nuclear nation, we cannot attack them directly, so we do the next best thing. A proxy war.

In the same way that we armed the mujahideen in Afghanistan to fight the Soviet Union, we are once again supporting rebellious groups as a means of miring rivals in expensive, pointless conflicts. You see, people are only "terrorists" when they attack us. When they attack our enemies, they become "freedom fighters".

This has happened since time immemorial. In ancient Persia, the Empire was being harassed in the western frontier by Greek colonies in Anatolia (Turkey). Various attempts were made to suppress this, including several planned invasions of Greece. The Greeks would form the Delian League to force the Persians to back off.
Long story short, several members of the alliance would be resentful of Athens' totalitarian control and demands for money. Some members revolted and were brutally suppressed. Persia saw this as an opportunity to remove their power rivals. They secretly funded Sparta in the Peloponnesian War. Funding their former enemy was a means of making two enemies weaker at once. Just as we fund ISIS secretly today to strain our rivals. 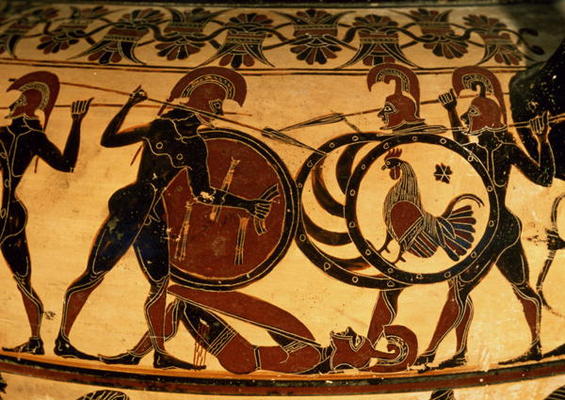