posted on Sep, 15 2016 @ 12:36 AM
link
I'm pretty sure it's poor form to use the word Tweets as both a verb and a noun in the same title but it's been a long day. First, a little bit of background information.

Kurt Eichenwald is an award winning journalist, a senior writer for Newsweek and a contributing editor for Vanity Fair. He spent the better part of two decades at the New York Times and was a Pulitzer finalist in 2003 "For reporting that disclosed how pharmaceutical companies secretly paid doctors to test drugs on patients". He's also a NYT bestselling author of non-fiction works including Conspiracy of Fools about the Enron scandal and The Informant about Archer Daniel Midlands whistleblower Mark Whitacre, a book which was the basis for the 2009 Soderbergh film The Informant! (which was a decent flick btw).

In other words, this guy is basically what a lot of us like to think we are after a few drinks and too many hours on ATS.

Kurt Eichenwald is also the author of yesterday's Newsweek cover story, How the Trump Organization's Foreign Business Ties Could Upend U.S. National Security which I admittedly haven't had a chance to read yet.

I don't know if he has a YouTube channel or not (that's a joke folks, lighten up ffs) but I believe we can all agree that with bona fides like that, he's a notable journalist of some regard which is absolutely the only thing that makes this next part at all interesting.

Tuesday he tweeted the following which were screencapped by Rolling Stone and Pitchfork writer, Corbin Reiff, before being deleted: 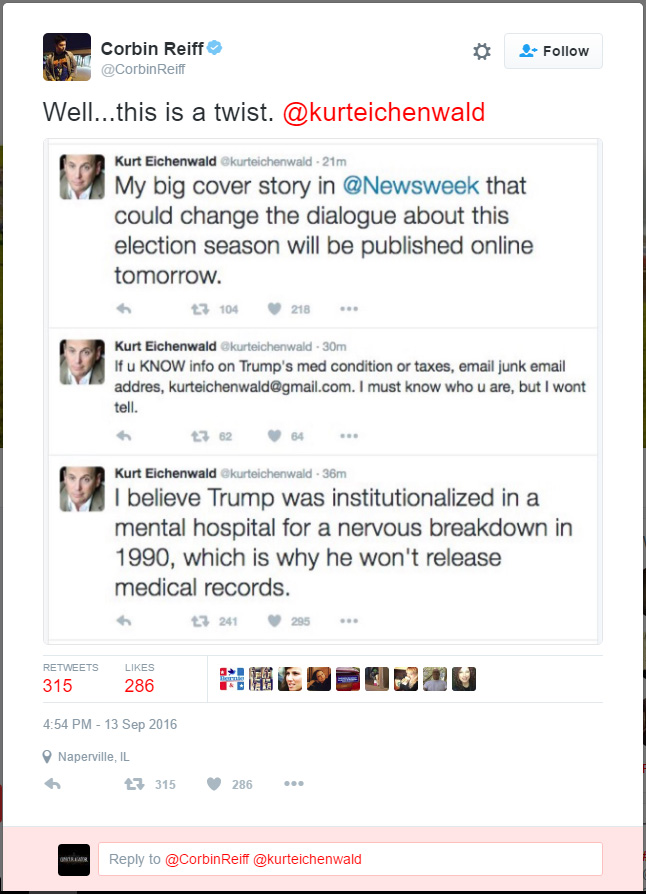 In response to Reiff, he tweeted this: 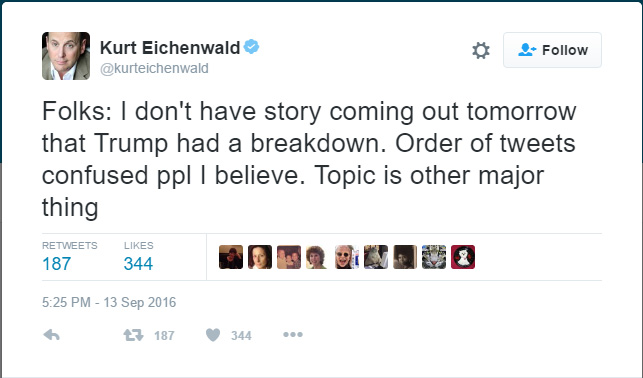 The sequence of the tweets led some to believe that the "big story" he referenced was an article about Trump having been institutionalized in 1990 when in fact it was the cover story that he was referring to. In his response to Reiff, he's clearly stating that his reason for deleting the tweets was the confusion they were causing and I have no reason to doubt that. That's not the interesting thing here of course — the interesting thing is that he'd just frickin' tweeted:

"I believe Trump was institutionalized in a mental hospital for a nervous breakdown in 1990, which is why he won't release medical records."

He also appears to have be implying that this Trump institutionalized in 1990 business was a (an other) "major thing" though the wording is a bit unclear: "Topic is other major thing"

Now that all that's out of the way, we can get to the wanton speculation!

It's obvious that in the middle tweet he's putting out a request ("fishing" might be another way of phrasing it) for anyone with information regarding Trump's taxes or medical condition to email him. Less clear is whether or not he was looking for sources to substantiate his hypothesis about Trump being institutionalized in 1990. My gut feeling says, "most likely."

The question remains: What would even lead Eichenwald to a hypothesis like that? (Aside from the fact that Trump seems to be if not outright insane — far less than stable — to perhaps tens of million of people. Yea yea yea, that's why I posted it in the Mud Pit you deplorable snowflakes!)

A hunch? A rumor? An anonymous tip? A confidential source who refuses to stand by the allegation? I can't help but notice that he said "I believe" and not something less certain. To be fair (I try, honest I do and I know the most honest people, amazingly honest people. So honest folks. Believe me), we can't rule out the possibility that he was he just asking the question to get for the purposes muckracking but it's certainly tantalizing isn't it? That's the sort of thing that could end a campaign overnight.

"I believe Trump was institutionalized in a mental hospital for a nervous breakdown in 1990, which is why he won't release medical records."

He also appears to have be implying that this Trump institutionalized in 1990 business was a (an other) "major thing" though the wording is a bit unclear: "Topic is other major thing"

Now that all that's out of the way, we can get to the wanton speculation!


Yawn, Trump could have had a lobotomy while at Happy Acres, but he's still a far better choice than typhoid Mary.
edit on 15-9-2016 by Nucleardoom because: (no reason given)

That's all well and good to say but if it turned out that he'd been institutionalized in 1990 for a "nervous breakdown," that would be it for Trump assuming Clinton is not actually dying of whatever she's supposed to have now.

It's the very sort of thing that did in Thomas Eagleton in 1972 and forced McGovern to ask him to withdrawl from the VP nomination. He was replaced by Maria Shriver's dad and McGovern/Shriver got mollywhopped by Nixon/Agnew.
edit on 2016-9-15 by theantediluvian because: (no reason given)

It would be a factor if true. Eagleton was shuffled out of line real quick after it became public, but he was the VP.
This will be very interesting if found factual and to think we haven't even got to the Sept/Oct. surprise.
Craziest election ever.

posted on Sep, 15 2016 @ 01:32 AM
link
Trump probably went to a doctor at a hospital for a headache and the liberal hatchet job gets turned into mental institutionalized....ache=mental hospital=institution, see how easy that was.

The way I understand it, the would be Dear Leader has never had a headache in his life and he only sees doctors to demonstrate to his admirers that he's the fittest human being the world has ever had the good fortune of being graced with.

originally posted by: TinfoilTP
Trump probably went to a doctor at a hospital for a headache and the liberal hatchet job gets turned into mental institutionalized....ache=mental hospital=institution, see how easy that was.

That's what I was thinking. The nation has already learned that whatever negative story the Liberal Media writes about Donald Trump, only a fraction of it is accurate...if any.

That being said, any of the few Super Achievers in this world have suffered something personally traumatic. It just goes with the Type-A personality. Hillary is a super-achiever too, but most of it was accomplished via deceit, lies, threats, etc..

posted on Sep, 15 2016 @ 01:54 AM
link
It's possible Trump has been on stimulants of one kind or another most of his life; I have a family member who used to be more or less "ADD" and didn't do well in school until he started on Ritalin as an adult; he went on to be an engineer but now he can't give up the stuff. He has a very unhealthy diet, mostly meat and large amounts of candy, and is showing signs of extreme paranoia; he carries a tape recorder and records every conversation he has with anyone without their knowledge and is always talking about how he's going to sue people. He gets exceptionally angry about minor issues and doesn't let them go. Sound familiar? He's also extremely overweight but maintains he's as healthy as the proverbial horse.

Maybe Trump was on something even stronger in the past and had a psychotic break. He certainly was unmanageable as a child; there's a new bio of him coming out where his own father is reported to have commented after being told Donald was in flight somewhere, 'I hope his plane crashes'...

That's what I was thinking. The nation has already learned that whatever negative story the Liberal Media writes about Donald Trump, only a fraction of it is accurate...if any.

It's strange how people think. "The nation has learned?" You do realize that neither one of these two clowns' supporters constitute a majority of the population right? A lot of people like to imagine that theirs is the popular opinion and that more people agree with them than actually do. I'm sure you're familiar with its use in political rhetoric. "The silent majority" for instance?

I'm too tired to get into your assertions about the "liberal media" but it suffices to say that yes, there is editorial bias but it exists throughout the media and if you look objectively, it exists more so in the very sources you more than likely think of as non-biased. If you're a big fan of the "alternative media" and you think they're somehow more honest then I feel bad for you because with very very few exceptions, they're worse, often much worse.

The fact that Hillary is horrible shouldn't cause you to believe that Trump isn't. If there wasn't something in it for Trump, I doubt he'd p*** on you if you were on fire any more than Clinton. Don't be a willfully ignorant sycophant.

That being said, any of the few Super Achievers in this world have suffered something personally traumatic. It just goes with the Type-A personality. Hillary is a super-achiever too, but most of it was accomplished via deceit, lies, threats, etc..

Good grief that's it for me folks. Time to crash. I can't even believe anyone could even pretend that this:

Doesn't also apply to Trump. He said it right to your faces. Were you not listening? He's bragged about paying off politicians on a number of occassions. He sues everyone, constantly. The guy who wrote The Art of the Deal (you know, the book he didn't write) had the audacity to speak his mind about Trump and he got threatened with a lawsuit the very next day. Way back when Trump was discriminating against black people who wanted to rent some of those 14,000 rental units his father had accumulated, one the sources of the "c for colored" notations on rental applications refused to testify in court out of fear for his life. (his words) Do you think that guy knew more or less about Trump than you? Those are just a few examples I figure you haven't had a chance to ignore already, I could go easily go on and on.

You can't possibly be this blind can you? Honestly?

Sure I'm voting for Hillary if she lives that long and I make no bones about the fact that I have nothing but disdain for Trump but I sure a hell don't labor under any delusion that she's honest, ethical, above threats, etc. I sincerely hope that some day this spell you've fallen under is broken (preferrably before the general election )