posted on Sep, 14 2016 @ 04:32 PM
link
Here comes the bots and there goes the jobs. Human will have to began to redefine labor and that will be a good thing because I think this will mean redefining money and cryptocurrencies will become way more popular than any fiat money. The ways to earn cryptocurrency is growing and it's simple to create your own digitial currency. This will be a more efficient way to earn money and the definition of labor will change drastically with robots, machine intelligence and 3D printing. Here's more:

Did robots help make your pizza?

If you ordered it from Silicon Valley's Zume Pizza, the answer is yes.

The startup, which began delivery in April, is using intelligent machines to grab a slice of the multibillion-dollar pizza delivery market.

Zume is one of a growing number of food-tech firms seeking to disrupt the restaurant industry with software and robots.

Inside its commercial kitchen in Mountain View, pizza dough travels down a conveyer belt where machines add the sauce, spread it and later carefully slide the uncooked pies into an 800-degree oven.

The startup will soon add robots to prep the dough, add cheese and toppings, take pizzas out of the oven, cut them into slices and box them for delivery.

"We automate those repetitive tasks, so that we can spend more money on higher quality ingredients," said Julia Collins, Zume's CEO and cofounder. "There will always be a model here at Zume where robots and humans work together to create delicious food."

Zume's founders say the company doesn't plan to eliminate any of its roughly 50 employees, but move them into new jobs as robots take over more kitchen work and the company opens new locations. 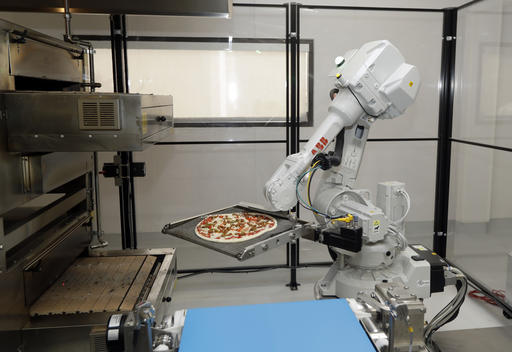 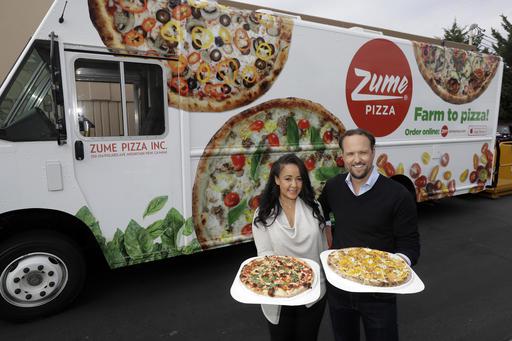 There Pizzas run between $15-$19 dollars and they say free delivery and no tipping on their website. Maybe they save with no delivery fee and no tipping. When they get even more robots the price might be even cheaper. You can check out their site here:

Like I said, I don't think it's a bad thing because once you redefine labor and digital currencies replace fiat or paper money, it will make it easier for people throughout the world to get goods and services. They can just print up a house or car or order a cheap pizza with digital currency that was made by robots.
edit on 14-9-2016 by neoholographic because: (no reason given)

posted on Sep, 14 2016 @ 04:35 PM
link
My local takeaway Pizza establishment employ only the finest Italian Pizza chefs and then works them to the bone.

They beg for release, but man, their Pizzas are sooo good.

posted on Sep, 14 2016 @ 05:16 PM
link
How is this much different than a factory that makes frozen pizzas? I guess since it's smaller scale, they don't need to churn out 10,000 pizza's an hour. Pretty soon we will just have robots make and deliver the pizza in a driverless car. No need to tip the pizza guy anymore!

originally posted by: Edumakated
$15/hr my azz... that is what this is really about. There is also a burger joint that recently opened that is pretty much all robots.

We got one here too. And we suspect that most of the people that go in there are robots too.

"We're going to eliminate boring, repetitive, dangerous jobs, and we're going to free up people to do things that are higher value


"We're going to eliminate boring, repetitive, dangerous jobs, and we're going to free up people to do things that are higher value

This is a good point lol. What higher value jobs will they be doing in a pizza shop? I think people should just be upfront and say this will replace human labor.

It's not just low paying jobs that are in trouble though. Imagine a virtual C.E.O. equipped with artificial intelligence running your company instead of a human C.E.O. No million dollar bonuses or golden parachutes needed and the virtual C.E.O. can interact with every employee simultaneously.

Imagine a robot Dr. that can do heart or brain surgery better than a human Dr. If say surgical deaths are reduced 30 to 40% with robot Doctors vs. human Doctors then everyone will want to get their surgery done by a robot Doctor to increase their chances of survival.

Businesses should be careful of what they ask for

But I can see more jobs opening up on the front end - robot building. More places going to robots mean more robots. Somebody has to build them.as well as the self ordering kiosks ............as long as they don't automate that process too much........Dooh!

originally posted by: burgerbuddy
I thought this might be about the pizza vending machines.


Yeah. The idea of putting the robot in the food truck might be something new, but robots have been making pizzas in vending machines for a few years now, and the pizza vending machine business is way past the "startup" phase: