:!: If You Are Still Supporting Hillary Clinton - PLEASE EXPLAIN WHY.

With less than 60 days to go before we elect a new President of the United States to replace Barack Obama, I'd like to know WHO is still a solid Hillary Rodham-Clinton supporter, considering that Hillary:

2.) Insults her supporter's intelligence, with lies and cover-ups about her health history and current status.

3.) Stated that as President, she will NOT represent 75 to 80 million AMERICAN CITIZENS, because they're "deplorable" human beings.

5.) Says that her tax increases will amount to a staggering $1.3 Trillion dollars on the rich, but will "trickle down" to every citizen.

I realize that many Hillary Clinton supporters will say that even half-dead, and with one foot behind bars, Hillary is still a better choice than Donald J. Trump.

But for the benefit of those of us who are perplexed at how any intelligent human being can STILL support Hillary, considering all that has transpired and been revealed (see #1-5 above) since the DNC convention, PLEASE explain why you think she's still a better choice than Donald Trump. Thanks in advance!

xuenchen
+28 more
posted on Sep, 12 2016 @ 10:04 PM
link
I still support her because she is honest and her integrity makes her the best candidate ever like President Obama told us at the convention. All the made up stories I keep hearing are just not true. Even the government reports.

Im not supporting either her or the other nutcase.

Both are going to get Americans killed and the bombs will fly. One's a liar and criminal, the other is a bigoted, prejudiced billionaire "businessman" who hasnt a clue about being political, poor, being an immigrant, a soldier, black or Muslim...

At least Clinton prob has had Ramen Noodles when she a Bill were in their College days. Nutcase has never pumped his own gas or eaten Kraft Macaroni...

Both are on my crap-list......and I aint wastin' any t.p. on either one. "Grandma" and "Coppertone Don" ought to just go away. We're doomed...and just with "Richie Rich"....the end of the world will come sooner....

Because she has the power to rise from the grave?

Nah, I never supported her, or Trumph.

Obligatory "I bet Clinton supporters can only talk about Trump", as if comparing two political candidates was against the rules.

Hilary's campaign is a racket. Her political triangulation, a product of her husband and advisor Bill Morris, has drained the Democratic Party from its principles for vote-grubbing. All this to seize power and for personal gain, not for liberal principles.
edit on 12-9-2016 by LesMisanthrope because: (no reason given)

Because she is crazy, sexy, and cool....emphasis on 'crazy' 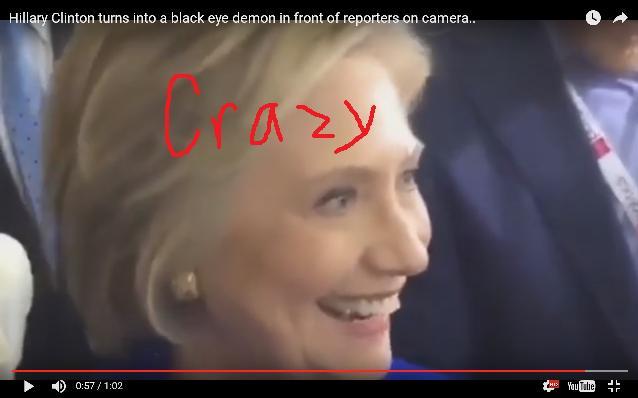 Actually...if she wasn't so unfit, was more truthful...and had excellent judgement, she may have gotten my vote....but emphasis would still be on crazy

Hillary Clinton for President! Here is why.

The United States government has historically been, the boy's club and women were mostly second class citizens until 1920. In 1922 Rebecca Latimer Felton became the first women to serve on the Senate, if only for a day. Ten years later in Arkansas Hattie Caraway became the first women to win the election to the Senate. However No women served from 1922 to 1931, 1945 to 1947, and 1973 to 1978. That all changed in 1992, the Year of the woman, when five women were elected to the senate.

After graduating from Yale University with a Juris Doctor degree Hillary Clinton spent her post graduate time serving as a staff attorney for a Children's Defense fund and as a consultant to the Carnegie Council on children. Fun Fact: She was also a member of the impeachment inquiry staff and her research lead to the resignation of President Richard Nixon. Shortly afterward Hillary became the first woman to be made full partner of Rose Law Firm. Another boy's club.

Then in 2001, Hillary Rodham Clinton joined the Senate and stayed for eight years. That should be a huge indicator to anyone that this woman obtains results. You don't just walk into and stay at an exclusive club with out being someone who can make it happen... If you look through her track record in government you'll see she has help millions of families across the country to have access to better health and better education.

I know she is flawed. Hillary Clinton is probably one of the worst campaigners I have ever seen. But that woman can govern!

With Hillary, I expect the same sort of nonsense we've seen for the last 30 years. It's bad for the American people, but it's a bad I know well.

Trump, on the other hand, seems like a narcissistic lunatic with limited intelligence. My fear is that he offers a "bad" that could be much worse than Clinton's, and even if it's not, I don't understand how to evaluate it, so my imagination runs wild with the negative consequences.

To be clear, I don't like either candidate, and these are, by far, the worst election offerings I've ever seen.

I would love it if Hillary's health concerns turn out to be valid and the DNC replaces her with Bernie.


Or Hillary Clinton: A Career Criminal?

It's mindboggling how dirty House of Clinton is. They put House of Bush to shame about 10 times over. Like the Bush's, I knew thy were bad in advance of this election, but damn it truly is breathtaking just how bad.

posted on Sep, 12 2016 @ 10:20 PM
link
Somebody should start a thread that asks WHO is NOT supporting either Clinton or Trump. They're voting for someone else, or simply staying home on November 8th.

There seems to be quite a few ATS members who despise both candidates of the 2 major party's.

She's every bit as much of everything the Democrat's keep projecting on Trump. In '08 you guys all voted for "Change". Too chez!

Maybe you're counting on her to be too sick to do too much damage?

posted on Sep, 12 2016 @ 10:25 PM
link
a reply to: Skywatcher2011
Dont orget a better memory. You have to remember sh** if you are President. Oh , wait . Obama forgot everything he had stated he would do , once he became President
Scratch the memory part.

originally posted by: IgnoranceIsntBlisss
a reply to: Greggers

She's every bit as much of everything the Democrat's keep projecting on Trump. In '08 you guys all voted for "Change". Too chez!

Maybe you're counting on her to be too sick to do too much damage?


I mean if you ignore the truth and spout GOP memes about Clinton.... Then yes Clinton looks terrible. As they say Ignorance is bliss.

She has plenty of real issues that can be used such has her foreign policy stances.

That's a beautiful and eloquent rendition of Hillary's history. So you're taking Hillary's "positions" in life as being an important qualifier for the Presidency..if I interpreted your post correctly.

And you're still voting for her, LesMisAnthrope?

posted on Sep, 12 2016 @ 10:28 PM
link
a reply to: TheAmazingYeti
You did know most of the groups you cited fell under investigation for corruption , right ?
Oh , and the Watergate deal. Clinton was nor allowed to present anything she had , for fear she would be disbarred

The brief was so fraudulent and ridiculous, Zeifman believes Hillary would have been disbarred if she had submitted it to a judge.


As Clinton had begun her long ll gotten career with lies and untruth and an attempt to Keep Nixon from even being able to testify himself .
I take it you were really posting reasons NOT to vote for Clintoon
Was Hillary Clinton Fired

Yes that's how I see it. This woman worked her way up the ladder and is running for President of the United States of America. I think that's a pretty big deal considering how America has historically treated women.

She's not prefect. No politician is. Anybody in the public light for as long as Hillary has been will certainly have some skeletons. However, at the end of the day she was never indicted for anything... Hater's gonna hate.
edit on 12-9-2016 by TheAmazingYeti because: words are hard when you're drinking whiskey