My Theory on Season 6 of American Horror Story

Multiple promo videos were realeased for an FX contest to 'guess' the theme. Only one was right, the rest were fake.

The official promo has the word 'croatoan' carved into a tree. So part of this will be about the Roanoke Colony. I would love that!!

One AHS actor said there will be 2 timelines, one being the past, one the future.

One clue was that 'all the clues' are in season 1. In season 1, Constance (jessica lange) says: "Virginian, Old Dominion, born and bred." When Vivian asks her if she is Southern. 'Old Dominion' refers the the Colony of Virginia. Not the original location, which is Dare, county NC (named for Virginia dare, the first English person born in the New World, named after the Virginia Colony).

As for the present day timeline, I am going for 'Summer Camp' or 'national Park/Camping' as clues repeatedly given refer to 'creepy children'. Some S1 actors will return, and S1 apparently has all the clues.

People on the twitter feed @CatchTheTrucks have pictures of AHS filming in Santa Clarita and Big Bear Lake Ca. This twitter feed has consistently given accurate information on AHS spoilers/shooting locations and info.

This has been released by TMZ: 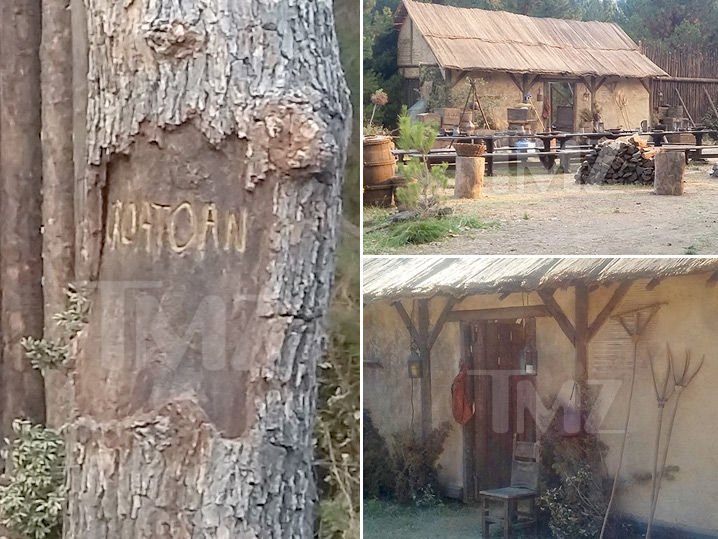 I think it will undoubtedly include some creepy children that need blood to feed. Lady gaga will return and possibly Lily rabe..both having blood drinking babies. (gaga in s5 and rabe in s1).

When settlers landed on the lost colony of Roanoke, it was the worst drought in hundreds of years in the SE US. Nothing would grow. That was a problem, whatever they had or the little they could grow, was wanted by native Americans, yet they were able to trade and were friendly with 2 tribes, Croatoan and Secatoan. The other nearby tribes did not want them there. There was a 3 year gap in getting new supplies due to England's war with Spain.

They were told, that if they had to leave, to carve 'croatoan' into a tree, meaning they left to the mainland with the Croatoans for a better chance to survive. They were also told to carve a Maltese Cross along with Croatoan if they were made to leave by force. If they had to leave quickly, that maltese cross is complicated. not sure they would have been able to carve both, if necessary. All of that could open disturbing stprylines, indeed.

Oral history names an Indian chief that admits to slaughtering all of the remaining colonists after they left to live with the Croatoans inland.

There is another line in se1 from Constance about 'the land being unable to grow anything due to pesticides', in the Harmon's backyard.

AHS fans...what do you think the theme will be???


She was the wife in the original occupants of the 'Murder House'. Her dr husband had been tinkering with frankenstein-like things. One of the boyfriends of a girl the husband gave an abortion to kidnapped their baby. It was returned by police in pieces. The husband was able to 'put it back together'...alive. Lily Rabe's character, attempted to nurse it, it did not want milk. It is the 'ghost baby creature' that attacks the later occupants of the house in the basement.

A producer said no to orphanage, that it would match S2 "Asylum" too much.

posted on Sep, 12 2016 @ 04:09 AM
link
For some reason I thought this season was going to be about the anti-christ baby from the end of season 1. That they were going to overtly start to tie the seasons together.

originally posted by: karmicecstasy
For some reason I thought this season was going to be about the anti-christ baby from the end of season 1. That they were going to overtly start to tie the seasons together.

That is another theory. But the clip where Vivian looks at her large belly, that is moving, is from a dream she had in S1. I think only fans pointed that out. It may be briefly shown in one of the multiple FX promos from the contest. I will look again.
edit on 12-9-2016 by reldra because: (no reason given)


It is American hororr Story: My Roanoke Nightmare. We'll have to see how it goes if the rest of what I thought was right.
I doubt it can continue much longer in the storyline of this one couple: Sarah Paulson/Lily Rabe, Cuba Gooding Jr./Andre Holland.
I had a feeling the pig from the s1 piggy piggy episode would make an appearance. I think we will see some ghost or vampiric pilgrims show up. In s1, the croatoan ritual the indians did to banish the ghosts of the pilgrims/colonists/settlers does not work-it didn't work when Violet tried to use it on Chad. Oddly, simply yellling 'GO AWAY' works, but I am not sure how long that lasts.

posted on Sep, 20 2016 @ 11:58 AM
link
Episode 1 was almost painful to watch. I really hope they kick this up a few notches. I mean, there's exposition, but that and this reenactment format...just painfully slow. It's really missing that background creepy factor present in the other incarnations of this show.
edit on 20-9-2016 by Gazrok because: (no reason given)

I actually appreciate this new format. I mean it s not scary in the least because its all illusion. But its entertaining. It breaks the pattern of previous installments of having clicks and groups. Coven, Freak show, Hotel for that matter.

Yeah, now it's moved to a "found footage" format. Not my favorite genre (because it's been so overdone and the camera moves give me a headache), but I'll stick with it for a while to see what happens.