page: 1
25
<<   2  3  4 >>
log in
join
share:
theantediluvian
+11 more
posted on Sep, 6 2016 @ 02:30 PM
link
If you're like me, you've been watching all the "conspiracy theories" about Hillary Clinton that have been popular on ATS in recent weeks and shaking your head. Promoted by The Gateway Pundit, Infowars, Breitbart, Russian agitprop Zero Hedge and even Fox News's Sean "I never said I was a journalist" Hannity (neither did we Sean, neither did we), there's a new one every day and sometimes more than one.

She's wearing a diaper. Her "handler's" got a diazepam injector. She's wearing a catheter. She's lying about pollen. She's drinking "special water." Her van has a wheelchair lift.

As such, I feel that the following "conspiracy theory" is more than in keeping with our current standards. Now, I didn't find it on WeazelZippers and no teenager on Twitter in a "Make America Great Again" hat pointed it out to me so you'll have to forgive me if I don't have a legit non-MSM "source" to back it up.

It was announced today that 88 retired military officers, including four 4-star generals (4+4=8!), have signed a letter announcing their support for Donald Trump.

As you may or may not already know, neo-Nazi's use 88 as a sort of shorthand/code for Heil Hitler with the 8's representing the letter H, the eigth letter in the alphabet. Here you can read more/see some examples.

What would a post like this be without a picture with some things circled? I got that covered too: 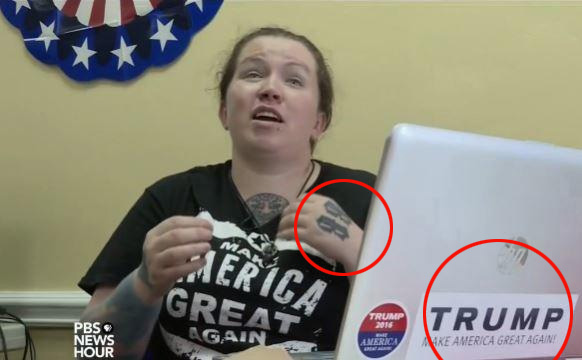 But I'd still expect some flack for daring to get conspiratorial about Trump & White Supremacy.


Mudpit eh, I love this forum, & I like your style lol.

so i dont get it. are you suggesting that the 88 announced military officials who have put support behind trump is because 88 is a neo nazi number?
thats just stupid.
the number 88 is also a number of luck in chinese culture
its amateaur radio lingo as well for loves and kisses

why does everyone associate donald trump with nazis? nazism is friggen stupid.

maybe you should ask hillary, i guess sheis infactuated with david duke, and was even endorsed by several groups of KKK members

Even if still love Trump. But like the first poster, satire.

posted on Sep, 6 2016 @ 02:42 PM
link
I recently discovered that my cat likes shrimp etouffee. He also likes to lick his own butt.
Ma Ma's shrimp etouffee tastes like cat butt?
What say you ATS?

So, how do you explain the bizarre behavior and crazy facial gestures from Clinton? Do you find that all to be completely normal?

The list of admirals and generals who signed the letter includes four 4-star and 14 3-star flag officers.

You should send this proof to Obama right away! (Oh wait, seeing as how he is the anti christ, he probably already knows.)

Now you're a numerologist, too?

Did you miss Hillary's memo that conspiracy theorists are racists? Are you a racist dude bro?
edit on 6-9-2016 by IgnoranceIsntBlisss because: (no reason given)

originally posted by: nobunaga
a reply to: Krazysh0t


And you getting triggered at the satire makes it even better! Thanks. I needed that laugh.

Heck all you Trump supporters getting triggered at the mere mention of Trump's name is just PRICELESS. Some are already trying to deflect to Hillary.
edit on 6-9-2016 by Krazysh0t because: (no reason given)

LMAO. 88, huh? This is one of the more 2-19 theories I've read on ATS in a while, and there have been some true doozies.

Gripping and clenching a bit the past week, aren't we?

posted on Sep, 6 2016 @ 02:46 PM
link
Well it's certainly not "satire" that the alt-right wanna be skin heads & what's left of the KKK as well as the militia Morans(sic)TM. are solidly behind Herr Drumpf.

Lol you get it, Grambler.