It shows an animal with a long, thick tail and what could be stripes on the body and amateur researcher Neil Water says the group believes it is a small thylacine.

"We believe our footage to be footage of a small thylacine moving around through the Adelaide Hills only 20 minutes from the CBD of Adelaide," Mr Waters said.

"You can see the body of the animal, it does appear to have some sort dark discolouration which may or may not be stripes.

"It has a long, stiff, pointy tail. Where the tail connects to the body is very wide at the base which is typical of the thylacine."

I've captured a couple of the more interesting frames showing the animal's head from the side, then from the front as it turns toward the camera and finally a frame showing the tail and hind quarters. 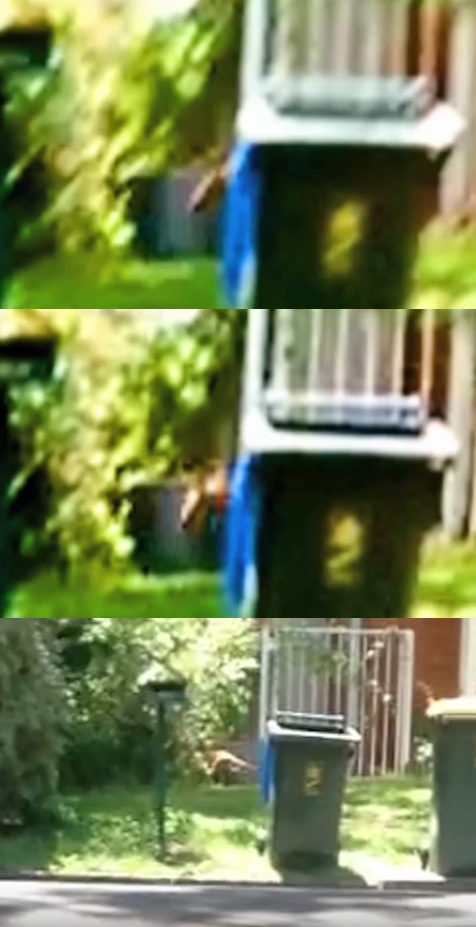 I've watched the video from the 9news link above and the longer one with different levels of zoom embedded directly above and of course, it's extremely difficult to make out anything. My first thought was wallaby looking at the shape of the head and the size of the hips. After a few more viewing, slowed down and zoomed in the body to be the wrong shape for a wallaby — it seems too long and to uniform in breadth. Also, mostly inferring from the body position in the frames between the appearance of the head and tail, the forelimbs are too long for a wallaby. Another thought I had was that it's actually two wallabies moving together which makes it seem as though it's one longer animal.

Looks like a dog or a fox. Only reasons I say "or fox" is the white on its tail and the shape of the body.

TBH, it isn't really clear enough to tell what it is.

I hope it's still around, would be an amazing find. Thank you for sharing OP

posted on Sep, 6 2016 @ 12:58 PM
link
This is just too blurry to even speculate.. anyway with any sort of extinct animal, you really need hard evidence to even consider this animal not extinct.

Anyway if this supposed taz devil is roaming around civilisation why do we not have more sightings of it? Anyone from that region would recognize it..

sure looks like one to me, especially the odd tail!

posted on Sep, 6 2016 @ 01:15 PM
link
That tail looks rather long to be a dog. I am hoping all our mutual confirmation bias in this thread manifests in making that the real deal, it would be very cool to know they are still out there and not extinct.

posted on Sep, 6 2016 @ 01:22 PM
link
Here is a link to footage of the last thylacine known to exist.
Compare it to the OP creature. Looks like it could be a young one.
aso.gov


It does doesn't it, Butcher.

I thought the exact same thing when I saw the third picture.

That tail looks rather long to be a dog. I am hoping all our mutual confirmation bias in this thread manifests in making that the real deal, it would be very cool to know they are still out there and not extinct.

That would be amazing..

originally posted by: Misterlondon
That would be amazing..

I think this is the only cryptid that I actually believe in so it would be kind of cool.

The tail is remarkable in the photo, outside of that

originally posted by: Raggedyman
The thylacine is a dog

Imagine a shaved wolf and you'd be close to what a thylacine looks like.


originally posted by: Raggedyman
The thylacine is a dog

Oops
You are right of course
But they do look like dogs, easily mistaken for a dog

Amazing how two people can look at the same picture and vid and see two completely different things.

I see literally nothing bushy on or around the tail, base, tip or otherwise.

It looks in the one really good still of the tail to be thick at the base and quickly become thin. It's very stiff as well. no real movement, movement is more typical in canines or foxes, if either one it's holding it's tail very oddly for members of said species. The tail is even at it's most blurry way way too thin to be a foxes unless someone shaved it's tail for some reason, not to once again, mention, held way too stiff for a fox.

I'm not sure it's a tiger, but it would be nice if it was. They look awesome.

The only thing we seem to get a clear pic of is the tail. The one thing most people are saying, wow that looks a lot like a tigers, by the stiffness of it, the angle it's held, and the exact way it tapers. I'm not sure how you are seeing something that seems the exact opposite of everyone else. The tail is the number one trait that makes it somewhat line up.
edit on 9/6/2016 by Puppylove because: grammar and spelling
edit on 9/6/2016 by Puppylove because: grammar and spelling

I watched the video again and just looped the few seconds where the tail appears a few times. You're right. Bushy, it isn't. But to me, it looks furry. Way too furry for the thylacine anyway.

But that's just my opinion. I could be wrong

ETA: Just a thought. I am on my phone, so maybe I'm just not seeing it large enough.
edit on 692016 by TerryDon79 because: (no reason given)