posted on Sep, 4 2016 @ 11:26 AM
link
That's right, folks! Among the eight semi-finalists for the planned 2020 Mars rover landing site is a location suggested by 16-year-old Alex Longo (Raleigh, N.C.). That, for itself, is quite impressive and certainly newsworthy, but the reason why I decided to post about this is that there might be an intriguing and rather unexpected element to this story (more about that further down).

Alex Longo already submitted his scientific proposal back in 2014 and NASA considered it to be serious enough to invite him to the official landing site selection meetings. His proposal suggests to land in one of two landing ellipses within GUSEV Crater. 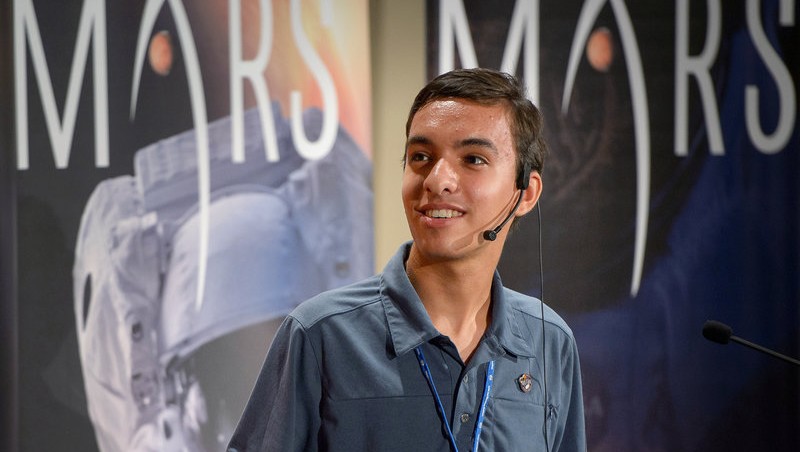 GUSEV crater? Now wait a minute, most on here who have been following previous rover missions on Mars will probably experience a Déjà-Vu when reading this (I certainly did). This proposal would mean that we'll return to a place we've already explored: Spirit rover touched down in Gusev in January 2004 and roamed the surface of Mars for 1892 days until she got stuck in a sand trap.

The mission resulted in lots of data incl. various images showing many interesting features (some of which were suggestive of past life on Mars). However, scientists always maintained that the evidence is inconclusive, so why return? Why not land in a different area? Does the recent consideration of the landing site indicate that NASA is in fact certain that they could find signs of life there with a better equipped rover?

Now, let's remember what the main objectives of the next Mars rover mission are supposed to be:

We of course know that, compared to Curiosity, this next rover will have a mission dedicated to identifying bio-signatures incl. finding any signs of life that may be encountered on its path (needless to say that it will also be equipped accordingly in terms of scientific instruments incl. a sample return experiment).

Did we already find signs of life, just waiting for final confirmation?
When looking at the proposal that Alex Longo presented together with S. Ruff and J. Rice, it's interesting to see their comparison of Gusev crater with a certain region of the Atacama desert in Chile called El Tatio (Hot Spring/Geyser System). This area is also known for displaying fossilized remains resulting from microbial silica interactions in the past. Below you will find three interesting slides from the official presentation: 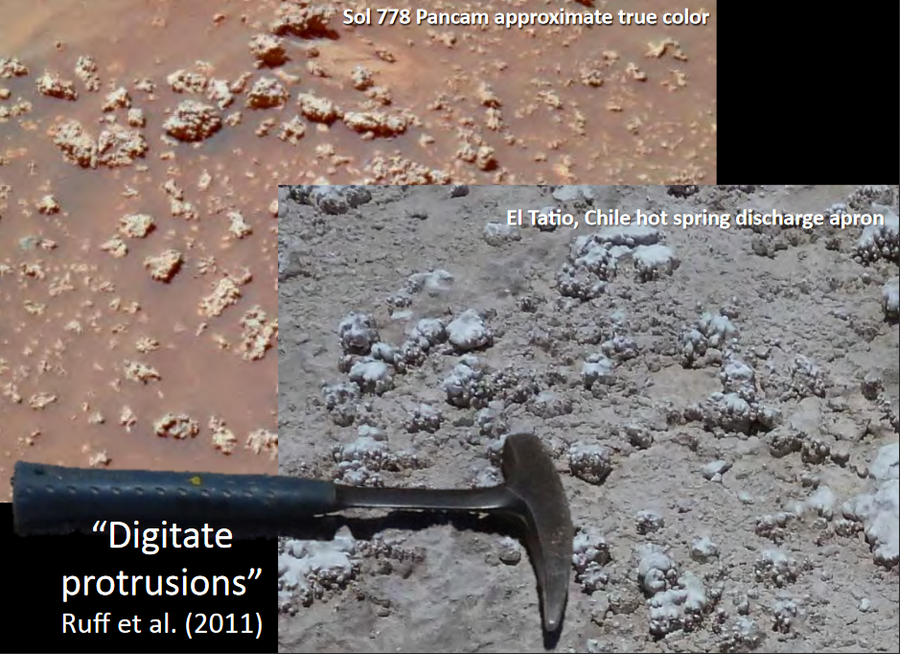 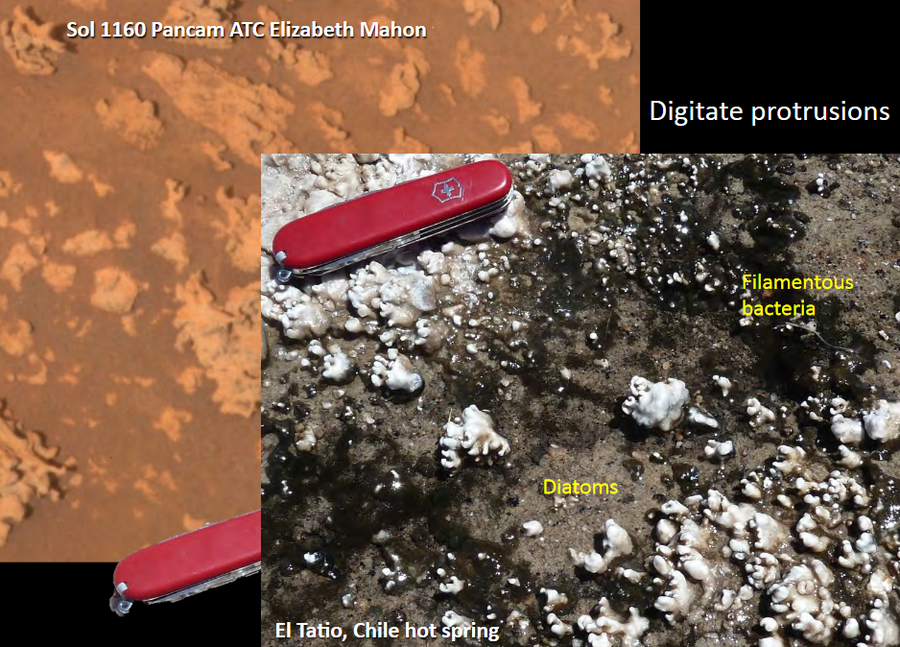 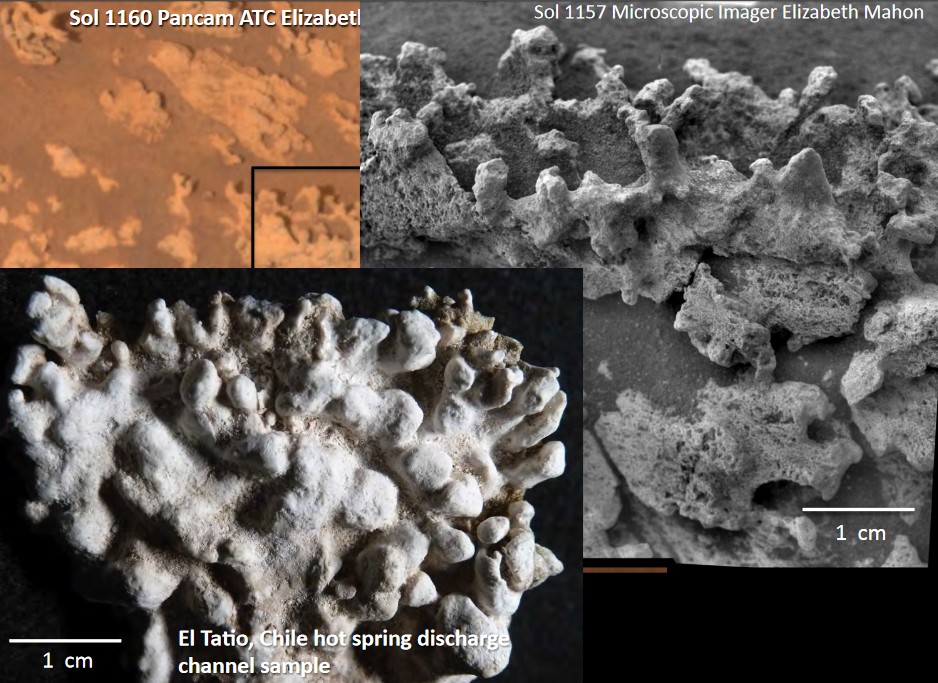 The bottomline of all this is:

Why should we return to that place which had already been explored by Spirit in extreme detail in previous years? Does the fact that NASA considers this to be a realistic candidate landing site suggest that most NASA scientists agree that these fossilized features represent signs of past life on Mars? Did they already know all along that a second genesis took place on Mars? This does raise certain questions, in my honest opinion ...

And finally: I don't think NASA is pulling off a promotional stunt by allowing this proposal into the final round just to make space exploration more interesting for youth and aspiring engineers. Now, assuming that the data and scientific evidence is valid, I wonder why we consider to return to that place? Thanks for reading up to here and I look forward to your thoughts on this!

The location has similarities with our own planet and to be fair, our rovers have done some good science, but saying "extreme detail" is overstating things. The same instruments combined with a human and a shovel could do significantly more.

We know that area and having been there before gives us a head start.

Boots on the ground is a "must", of course!

But what I mean is: the site has been explored in such detail by Spirit, that it is obviously sufficient for NASA scientists to officially declare Gusev a target for a mission that is supposed to find evidence for life.

So the majority of those scientists must be pretty certain from the data we already have that this evidence can indeed be found at Gusev crater?

Going back for a closer look ?
It's possible although the proposal is just one of eight going through to the semi-finals , it remains to be seen if it is chosen.

My vote would be for Valles Marineris.

I suggest they land outside a impact crater. The impact itself probably destroyed most evidence of life.

Maybe they should land in that canyon. Stuff runs down hill, might be water down there, things would have fell in there from above and be sitting on top etc...

Stop going to impact craters where meteorites and asteroids have destroyed everything.

Going back for a closer look ?
It's possible although the proposal is just one of eight going through to the semi-finals , it remains to be seen if it is chosen.

My vote would be for Valles Marineris.


Wouldn't this come close to an admission that they already came across something at Gusev that could be called "evidence of past life". Why else would we send another expensive rover there, if we couldn't be certain to achieve our mission (to find signs of past life)?

In other words: most of the scientists involved in the Mars exploration programme must have seen sufficient evidence for past life based on the data sent back by Spirit years ago. But they never officially came forward with this because much of it is based on visual similarities with Earth (and analyses of the mineral composition at Gusev, which also corresponds to what one would expect in terms of past life).

But scientific standards require even more details before claiming "proof", so we go back there to retrieve a sample of those features that are already assumed to be of ancient microbial origin and then, by 2025 or so (when the sample return mission delivers the result for analysis on Earth) we will have certainty?

Once again I'm reminded of this article: Is NASA Running Away From Life on Mars?

The thing is an impact crater is a big hole in the ground and to see into Mars past you need a hole in the ground , if a crater is old enough it would have had water within it so a likely place for life to evolve , Gusev is about four billion years old so an ideal location.


Wouldn't this come close to an admission that they already came across something at Gusev that could be called "evidence of past life".


Not necessarily , if the site is chosen the landing would be in a different area of the crater , Gusev is about 166 kilometers in diameter so there's plenty of virgin territory to explore.
I doubt the proposal will make it to the final as there are no doubt other areas of interest but Gusev is a good candidate.

We will see next year.

Perhaps you're right, although I believe the proposed landing ellipses are very close to where Spirit landed back in 2004 (at a location called Home Plate, and generally south of that area).

Here's the paper on which much of the information in the OP is based:

The columnar sinters that form nodular clusters in shallow hot spring discharge channels at El Tatio provide a remarkable analog to the forms of silica observed adjacent to Home Plate, making a strong case for a comparable setting on Mars. At El Tatio, such settings favor the growth and preservation of microbes, thus the Home Plate silica deposits are an ideal location for searching for past life on Mars.