There should be a new law called The Conservation of Entanglement

posted on Sep, 4 2016 @ 11:26 AM
link
At the end of the day, Entanglement seems to explain everything. Everything is entangled and what we experience as local realism is just an illusion. The universe is non local and entanglement is never lost, it just shifts and can be hidden after a measurement occurs and things appear classical. We see this in entanglement swapping. Where the original entanglement isn't lost but it shifts to a different set of particles.

Recently, there’s a new equation revolving around the world of physics as if it is a Bollywood gossip. The equation is pretty easy to remember: ER=EPR and people think that it would have made Einstein very proud. Through this, researchers hope to solve some of the oldest paradoxical puzzles of the scientific world.

Unlike usual equations where letters represent numbers, the letters here represent names. E stands for Einstein while R and P refer to two of Einstein’s most fascinating research papers. According to Science News, “these letters express a possible path to reconciling Einstein’s general relativity with quantum mechanics.” Both theories; quantum mechanics and general relativity are found to be correct when put into test. They both describe our nature perfectly but even then, when scientists try to merge the theories mathematically, they fail. “So far nature has kept the form of their connection a secret”, says Science News.

In a recent paper, according to researcher Susskind the equation suggests that the key to their connection might be present in the spacetime tunnels, also called wormholes or Einstein-Rosen bridges. As suggested by Einstein’s general relativity, these tunnels would be like subspace shortcuts that physically link distant locations. According to this equation, it would be okay to say that all the quantum weirdness (such as its enlargement) that scientists have been stressing over for years can only be understood once its connection to gravity is known.

Susskind writes, “ER=EPR tells us that the immensely complicated network of entangled subsystems that comprises the universe is also an immensely complicated (and technically complex) network of Einstein-Rosen bridges. To me it seems obvious that if ER=EPR is true it is a very big deal, and it must affect the foundations and interpretation of quantum mechanics.” Apart from this, in his paper, Susskind also speaks about how quantum fields can also be entangled. He wrote that, “In the vacuum of a quantum field theory the quantum fields in disjoint regions of space are entangled,” he writes.

This makes sense. Entanglement would always exist in this subspace and we live in an illusion of local realism but we're never separated from the entangled whole. We have known for awhile that local realism is dead. Here's more from Nature.

Here's more from an article titled "How spacetime is built by quantum entanglement."

The holographic principle is widely regarded as an essential feature of a successful Theory of Everything. The holographic principle states that gravity in a three-dimensional volume can be described by quantum mechanics on a two-dimensional surface surrounding the volume. In particular, the three dimensions of the volume should emerge from the two dimensions of the surface. However, understanding the precise mechanics for the emergence of the volume from the surface has been elusive.

Now, Ooguri and his collaborators have found that quantum entanglement is the key to solving this question. Using a quantum theory (that does not include gravity), they showed how to compute energy density, which is a source of gravitational interactions in three dimensions, using quantum entanglement data on the surface. This is analogous to diagnosing conditions inside of your body by looking at X-ray images on two-dimensional sheets. This allowed them to interpret universal properties of quantum entanglement as conditions on the energy density that should be satisfied by any consistent quantum theory of gravity, without actually explicitly including gravity in the theory. The importance of quantum entanglement has been suggested before, but its precise role in emergence of spacetime was not clear until the new paper by Ooguri and collaborators.

Quantum entanglement is a phenomenon whereby quantum states such as spin or polarization of particles at different locations cannot be described independently. Measuring (and hence acting on) one particle must also act on the other, something that Einstein called "spooky action at distance." The work of Ooguri and collaborators shows that this quantum entanglement generates the extra dimensions of the gravitational theory. 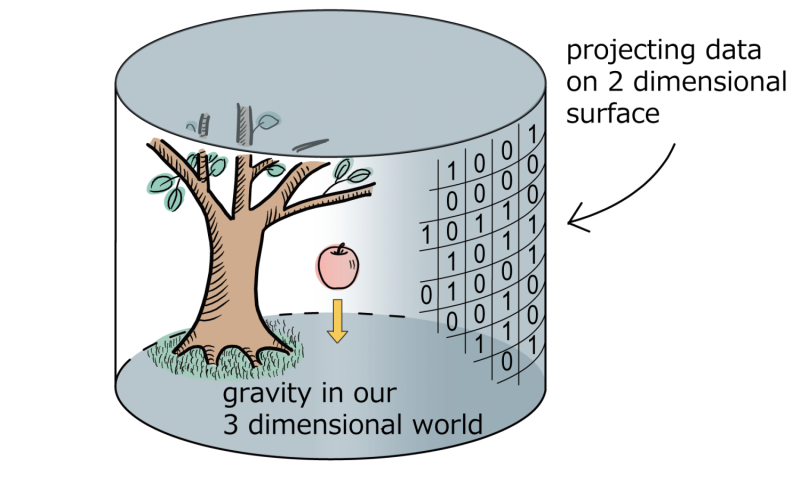 This is a growing area of interest for Physicist because it has a lot of explanatory power. The geometry of gravity is essentially the conditions of quantum entanglement on the energy densities that give rise to spacetime.

If you look at the images, it shows that there's a correspondence with the boundary where there isn't any gravity just highly entangled ragions throughout the entire boundary surrounding spacetime and the bulk or the space that we live in. When entanglement is reduced to zero, space breaks apart. That fact that separation is an illusion suggest that entanglement is conserved and never reduced to zero.
edit on 4-9-2016 by neoholographic because: (no reason given)

posted on Sep, 4 2016 @ 05:16 PM
link
There is a recent post at S & T related to this though you have covered the subject matter more specifically that that thread...

For me the perception we have of reality is not an Illusion but rather a means to and end and that being the evolution of life.

A live alternative to quantum spooks
Huw Price∗ and Ken Wharton†
Abstract
Quantum weirdness has been in the news recently, thanks to an ingenious new experiment by a team led by Roland Hanson, at the Delft University of Technology. Much of the coverage presents the experiment as good (even conclusive) news for spooky action-at-a-distance, and bad news for local realism. We point out that this interpretation ignores an alternative, namely that the quantum world is retrocausal. We conjecture that this loophole is missed because it is confused for superdeterminism on one side, or action-at-a-distance itself on the other. We explain why it is diﬀerent from these options, and why it has clear advantages, in both cases.