More censorship from the totally "non-partisan" major media outlets. This, along with Reuters cutting the feed from Bishop Jacksons remarks during Trumps visit to Detroit, is just another blatant example of the sweeping censorship on news and social media platforms.

It's just so bloody corrupt, this is unprecedented propaganda in the USA on par with the Soviet Union. How can people keep supporting this? 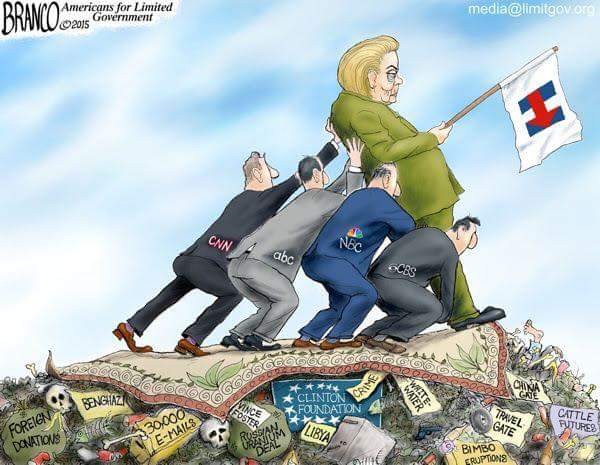 However, it isn't and this guy has very valid points.

My question to others who may not feel that way is "What do you think will happen if we don't enforce our already established laws?"

originally posted by: Konduit
It's just so bloody corrupt, this is unprecedented propaganda in the USA on par with the Soviet Union. How can people keep supporting this?

You don't hate America, do you?

Love to see this. It isn't too often we get to see people showing everyone the truth about how Hillary and the MSM actually feels about them. That minorities are all just a possession to the MSM for votes, and Hillary has shown she thinks the same way about all minority groups, like they own them as a branded property. And this guy totally smashed them into the dirt.

It's globalism at it's core... you think communist China isn't controlled by corporations?

Nope. The Party controls the "private" industry over there.

The Party isn't a particularly unified organisation. It's composed of various factions all radically dedicated to destroying the other ones.

China has purposely devalued it's own currency to cater to multi-national corporations, if companies like Apple or Nike pulled it's factories out the countries economy would collapse overnight.

The irony is that they are more dependent on capitalism than we are.

Now back to the topic at hand.

They're not sure how to respond, they become frightened that'll they'll something stupid in response so they just move along with little to no rebuttal most times.

This is our media - the asshats that give us "the news"

It's globalism at it's core... you think communist China isn't controlled by corporations?


But expanding and earning profit is part of capitalism; a globalist agenda is certainly part of the final equation.

Why everyone puts non-partisan into quotes when referring to the media agencies I'll never understand. It's a well known fact that media reporting is biased - besides that fact, this isn't quite USSR propaganda, that was state-fed to state-run agencies. We have in America, corporate entities seeking to control the outcome by controlling the narrative.
Billionaires pushing the agenda of Billionaires; this isn't a battle to be won by electing one person.

If there's one thing we can take away from the 2016 elections, it's that the corrupt system has been exposed like never before.

Things will never be the same in America, and whether people like it or not, Trump is a part of that revolution.

That was the mother of a nail that this gentleman just hit with a even bigger Hammer....


I actually think this type of thinking will run across a lot of the Latino and minority voters.. Expect a big shock come election day me thinks....

originally posted by: Konduit
a reply to: eNumbra
Things will never be the same in America, and whether people like it or not, Trump is a part of that revolution.

And there's that wall; not one on the border mind you, I'm talking about the insurmountable wall of utter disagreement that anyone who's as clearly part of the problem, part of the establishment brokered between business and politics is going to be part of the solution.
You can tell yourself he's different, that the news media goes after him like none before but really, that's bull#. Every election has been partisan, and every one has been "worse than the last". Not because it is, but because the people are cracking, and regardless of who wins, Rome will not stand much longer I think.

Good post, but not surprising. CNN has become the Corrupt News Network. Their daily 24/7 biased reporting and protecting of Hillary is historical. I get so mad when I turn it on during a commercial on another station I am watching to find nothing but Trump bashing by ignorant reporters.

Hillary is never seen, she is in hiding, most least accessible presidential nominee in history. Has not held a real news conference in close to 300 days.

Some one asked earlier what happens if we continue to not enforce the current immigration laws? Continued illegal entry into our country abusing our people, benefits and costing billions of dollars that in essence is paying for illegal behaviour.

The next 65 days should start to really heat up with the mud-slinging. However, Hillary is protected by the msm. The FBI releases their interview with Hillary regarding the unauthorized server and correspondence of sensitive material, on Friday of long holiday weekend.....So it could just disappear like Hillary, and pray that by Tuesday, Iran and the swift boats make more waves around our destroyers in the persian gulf.

The debates will be rigged, stupid questions for Trump, and all the block and tackling for Hillary.

I have never been so disappointed by our government, leadership and the biased, bigoted and racist reporting by the mass media. I am a voter, so I will exercise my right, but have no faith in the system. I truly believe it is rigged, and there is a behind the scenes agenda by TPTB, to take America down from within.

I know this may seem paranoid to the uneducated, however, I am very involved in government activity and research. The dumbing of America began 35 years ago, and as they have patiently waited, we are now faced with division and corruption in the Shining City on a Hill.

That is my feeling for now......I hope for the best, but have begun preparing for the worse.

posted on Sep, 3 2016 @ 10:32 PM
link
The more the media tries to push her the worse it gets for her. Serious drop for her the last couple of weeks and it will only get worse with this tactic. People do not like it. It may have worked in the past but the game has changed. There is no way she is going to win with this industrial blitz and just going into cruise control of not answering real questions with real answers.

Imagine if the tables were turned. The media has to constantly contrive these fake scandals on Trump to distract from the real scandals piling up around Hillary.

It looks more like he was cut because he wouldn't shut up long enough for the reporters to even ask a question. It was more of a rant than anything and the only ones that get away with that sort of thing are people like O Reilly.

I barely ever watch TV but when I did interviews usually went back and forth.

The video was obviously edited to cover his conversation during the segment. But I think you already knew that.

Here is the full video, though we won't be seeing him on CNN again anytime soon!

Just calling it how I saw it with what you presented. You can see they tried to talk to him several times, but he wasn't having any of that.

I suppose you should watch the full version before you make a judgment like that.

Any opinions on what he said?

Good post, but I think releasing it on a Friday gives more exposure due to lack of other news to cover on a weekend except in this case for three reasons: