Trump's link to the nWo

posted on Sep, 3 2016 @ 10:51 AM
link
for all the ardent trump fans here, this thread isn't meant to bash him but, a simple look at one of his past ventures.
for the believers in the new world order, maybes a little light is shone onto how this conspiracy took off.
for the rest, hopefully a little light relief from the usual.

back in 1996 a burgeoning internet began to take off big time, the browser battle between netscape navigator and internet explorer began, and search engines from yahoo and aol wanted you to make them your homepage.
these search engines would show the most searched for terms, rather than promote the highest bidder which happens now, so it was prevalent to get some free advertising, and led to the dotcom bubble shortly after.
on tv on monday nights, outside of the nfl season, two wrestling companies vied for viewers in what was called the, 'monday night wars', wwf, not the panda loving tree huggers but the world wrestling federation were established but coming off the back of drug scandals from past stars, were now trying to push smaller, less steroid abusing looking guys like bret hart and shawn michaels.
their opponents world championship wrestling or wcw, picked up all the old, shamed stars but what could they do with hulk hogan? in the eighties he was famed for telling kids to take their vitamins and basically being the good that stood up to bullies, now had a rather large, dark cloud over him.
enter the new world order of wrestling, or nWo, ironic because this stable was filled with old superstars, genius because those old fan favourites were now the baddies!
the audience generally being young, and the young already trying to use the internet started searching using search word nWo, it was huge.
enter alex jones and david icke types, desperate for web traffic for their radio shows about government cover ups and lizards, for these guys a light flicked on, lump them together rename these evil governments, and lizards, the new world order and we can get web traffic our way!
which kinda worked, people switched off from icke's lizard led agenda and jones, well he kept predicting the end of the world.
fast forward to september 11th 2001, the same conspiracy types claiming they had the truth now got a healthy bump online, but what to do with this new world order malarky from years back?
pages and shows had been dedicated to garner web traffic back in the day, would they just let it go away and start over?
so that's where the new world order started kids, hulk hogan! 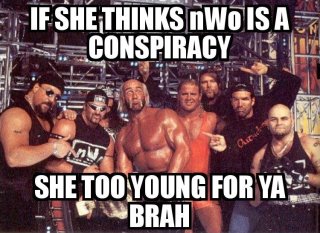 later the wwf lost naming rights to the world wildlife fund and renamed themselves wwe, the e is for entertainment.
wcws owner ted turner bought the biggest search engine on the planet, aol, and gave them his tv channels and wrestling company in return.
the guys at aol didn't like wrestling so wcw was sold and bought by, wwe!
after some aborted attempts to relaunch the nWo, wwe decided to let it become a memory, but still hold the naming rights.
fast forward to 2007, trump freshly fired from reality tv show the apprentice, kept his media profile high by joining the wwe and headline wrestlemania in a hair vs hair match.
the appearances by trump led to him being inducted to the wwe hall of fame in 2013.
wwe own the trademark nWo, trump has made several appearances for the wwe.

man, you at least got to show us the match!
The deal which made it official!

Although, he should have done a better job of selling those fake punches.

Yep, I remember the "Battle of the Billionaires" well. They did a fantastic selling job on it. Trump was the face, and Vince was the heel. Vince is almost always the heel...

One thing: I remember hearing about the NWO before the wrasslin' gimmick. It just wasn't as popular, like Nessie and Nibiru. I think the McMahons used it to brand the heels in the NWO, and from there it caught on with the younger crowd.

Nice trip back down memory lane. Thank you!

posted on Sep, 3 2016 @ 12:42 PM
link
He had to learn and audition some where.
I brought this up a while back.
I don't know and I can' tell you exactly, there's just something about all this that doesn't fit.

( And Philby taking the time to personally instruct the Vlad-e-ator when he was young. )

Nick Nack, where are ya old buddy, we sure need ya now.

posted on Sep, 3 2016 @ 01:19 PM
link
Trump has payed politicians like the clintons for favors, invited the clintons to is wedding. Said eh likes hillary more than once.

Did business with Soros.

Dur durp durp trump is da man, he is yuge in awesomeness.

posted on Sep, 16 2016 @ 04:44 AM
link
You mean other than the simple fact that he's ever been heard of? Anyone you've heard of is owned and controlled by the same people. You can count on that.