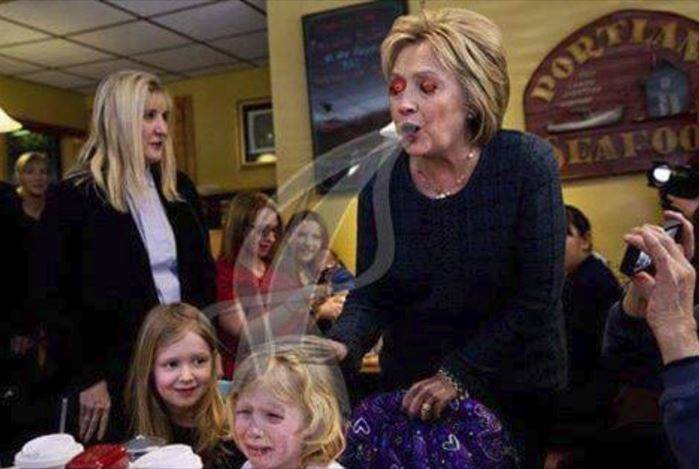 Excellent visual compare/contrast graphic on the queen of sales, shawmanfromny. On those occasions when her brain is functioning adequately, Hillary Clinton knows what position on a given topic will get her the most votes. Most of the top salesmen in our business are fake like Hillary, and rich...like Hillary.

originally posted by: rose126
a reply to: HUMBLEONE

Thats right! She's paid them all off already with pay to play cash and the FBI is covering the whole thing up. What a Country!

The stress of the campaign is further aggravating Hillary's already fragile mental health. She's now claiming that half of all Trump supporters belong in "a basket of deplorables".

She may mentally crash and burn any day now.
edit on 9/10/2016 by carewemust because: see above

posted on Sep, 10 2016 @ 11:58 AM
link
I had to research the word "deplorables". Seems there was no plural tense until demented Hillary invented it last night. This article does a nice job of summing up what she meant.

posted on Sep, 10 2016 @ 01:59 PM
link
Now Hillary is suddenly saying that she used the wrong words to accurately depict how she feels about people who support Donald Trump. What's that..about 47% of America, she's now insulting with a meaningless apology?

Hillary's not firing on all cylinders, and will soon blow a gasket. Any 70 year old who's subject to Thrombosis and Cerebral Clotting, should not.. I repeat.. NOT be in charge of anything as big, and complex, and potentially dangerous, as the United States of America. (Her crookedness is equally as disqualifying.)

originally posted by: carewemust
Now Hillary is suddenly saying that she used the wrong words to accurately depict how she feels about people who support Donald Trump. What's that..about 47% of America, she's now insulting with a meaningless apology?

Hillary's not firing on all cylinders, and will soon blow a gasket. Any 70 year old who's subject to Thrombosis and Cerebral Clotting, should not.. I repeat.. NOT be in charge of anything as big, and complex, and potentially dangerous, as the United States of America. (Her crookedness is equally as disqualifying.)

Agreed. But, all she has to do is get in.

Then, the Dems can go down in history as the party that put the first woman in the White House. Once she gets in, her staff and lackeys can run the place and she can nap all day rather than play golf like Obama does while others take care of real business.
edit on 10-9-2016 by queenofswords because: (no reason given)

originally posted by: shawmanfromny
Question of the day: How can a former First Lady and Secretary Of State be so absent minded? Today, the notes from Clinton's interview with the FBI have been released. It's truly pathetic that such a high profile political figure continues to "pass the bucket" and resort to blatant lies in covering up her irresponsible actions. How could the FBI agents interviewing her and FBI Director Comey NOT be sceptical with what she was saying? The sad thing is there are people who continue to believe this woman can do no wrong.

Tell ya what -- let's get ahold of your email account and start quizzing you about emails that you received and replied to three years ago.

Do you think you can recall every single one? I sure can't! Heck, I can't recall exactly emails from a year ago though I have some vague recollection. Nor can I recall in any detail the email exchange between my brother and myself about selling Dad's house three years ago (and that was an important event that involved a lot of email action.)

If we started quizzing Trump about his old emails, do you think he'd have perfect recall?

Or Stein? Or Gary Johnson?

If you somehow think that any of these people would have miraculous total recall even about important emails that took place from 2010-2013 (when they probably received a thousand or more such emails each year) then you are expecting more of a human brain than it is capable of remembering - unless they happen to be one of those savants (who are frequently autistic.)

I guess she has "selective" forgetfulness. Unfortunately the things she "can't recall" deals with this Nation's security. There are no lame excuses (LIES) acceptable when you're Secretary Of State!


On her first day in office, Mrs. Clinton received a 2.5 hour tutorial from two FBI agents - just the two FBI agents and her - on her legal obligation for recognizing state secrets and for preserving them. At the end of that tutorial, she signed a two-page oath, under oath swearing that she understood her obligation to recognize secret material whether it has a header on it or not!