page: 1
30
<<   2 >>
log in
join
share:
shawmanfromny
+9 more
posted on Sep, 2 2016 @ 03:17 PM
link
Question of the day: How can a former First Lady and Secretary Of State be so absent minded? Today, the notes from Clinton's interview with the FBI have been released. It's truly pathetic that such a high profile political figure continues to "pass the bucket" and resort to blatant lies in covering up her irresponsible actions. How could the FBI agents interviewing her and FBI Director Comey NOT be sceptical with what she was saying? The sad thing is there are people who continue to believe this woman can do no wrong.

Clinton relied heavily on her staff and aides determining what was classified information and how it should be handled.

Apparently, the woman who wants to be president “did not recall” being briefed or trained on classified information — despite signing multiple NDAs. Moreover, she appeared confused about what classified markings meant — despite her “experience” as Secretary of State.

The sad thing is there are people who continue to believe this woman Trump can do no wrong.

Well, Obviously Trump wasn't a former First Lady or Secretary of State. "Honesty" and "Integrity" would be somewhat important if one were, wouldn't it? However, trump might look better in a pants suit. 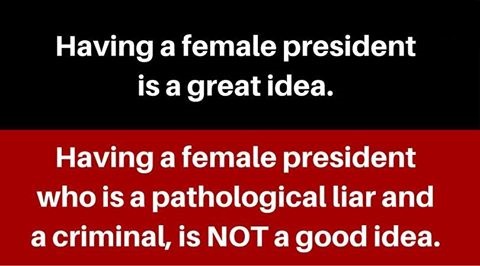 posted on Sep, 2 2016 @ 03:39 PM
link
I dont actually believe she's a pathological liar by nature, I believe she's a world class career criminal who looks looks like a pathological liar because she's up to her neck in criminality 24/7/365 , so anytime anywhere or anything she is asked about , she is forced to lie because telling the truth would instantly get her arrested...

"so miss clinton, where were you last week at 7 oclock"

(but really she was giving orders to plan a false flag attack on the voting machines and getting the FBI to take control of them to rig the algorithm and pretend they are investigating a "hack"....

originally posted by: Nikola014
a reply to: shawmanfromny

She's got a disease, huh? Wow...I guess that means she isn't at fault at all. She isn't really lying on purpose...she can't help it. She's simply under the control of a disease that does not allow her to speak truthfully, so obviously she's innocent of any wrongdoing.

And all this time, people just thought she did all this stuff deliberately. Little did they know, she was just another unwitting victim of mental illness. Thank you for clearing that up for everyone and setting the record straight. You're a peach.

posted on Sep, 2 2016 @ 03:43 PM
link
Thanks for your opinion ... now go to medical school, specialize for a decade or two in diseases of the elderly, and give the woman an examination, then I might give heed to what you have to say.

Otherwise, I gotta believe you're just making crap up based on your misguided political dogma.

He's backtracking and changing his mind like a veteran politician already.

If you saying she's got dementia what's his excuse?

posted on Sep, 2 2016 @ 03:58 PM
link
Again I'd like some sort of explanation from the people that are defending Hillary against claims of some kind of brain injury. Have you not seen all the videos of her wigging out and acting really strange? How do you explain that?

I agree with you; I'm not a big Trump fan either. However, like MANY people in this country, I'm forced into voting for a presidential candidate with the LEAST amount of skeletons in their closet. Right now, Trump gets my vote.

She's been diseased since the 60's, at least.

Excuse for what? Always being right?
edit on 2/9/2016 by IridiumFlareMadness because: (no reason given)


I'm forced into voting for a presidential candidate with the LEAST amount of skeletons in their closet. Right now, Trump gets my vote.

Really? You've seen the skeletons in Trump's closet have you? His tax returns for example? How much does he owe Russian oligarchs?

Yep, really, I have. Doesn't compare to the misdeeds, lies and corruption done by Hillary Clinton(and Bubba). Sorry, that's just my opinion and you're entitled to yours my friend.

1. “I remember landing [in Bosnia] under sniper fire,” Hillary boasted. In fact, a video of the trip shows Hillary and her daughter Chelsea being greeted at the peaceful airport in Tuzla, Bosnia, by a young girl with flowers. 2. Hillary complained that she and her husband left the White House “dead broke.” In fact, they left with contracts for lecture and speeches worth between $20 and $30 million. 3. As a junior senator, Hillary voted to authorize the war in Iraq. But when the war became unpopular, she flip-flopped and opposed the surge in Iraq. Later she admitted she did so purely out of political expediency—she wanted to gain advantage over Barack Obama in the 2008 Democrat primary. 4. When Hillary was running for the 2008 Democrat nomination, she told the editorial board of the Nashua Telegraph, a leading New Hampshire newspaper, that she favored a plan to give driver’s licenses to illegal immigrants. She later claimed she never said that. 5. Hillary approved an unethical—and probably illegal—sweetheart deal for her closest aide Huma Abedin. It allowed Huma to receive a $135,000-a-year- salary from the State Department, while she was being paid as a member of the board of the Clinton Foundation, and worked as a $335,00o-a-year outside consultant to a firm founded by a Bill Clinton crony named Doug Band. 6. Hillary refused to designate the notorious al Qaeda-linked Nigerian Islamist group Boko Haram as a terrorist organization because a major contributor to the Clinton Foundation, who had business interests in Nigeria, asked her not to. 7. Hillary voted to approve the sale of 20 percent of the uranium production capacity in the United States to a Russian company. 8. Hillary intervened to fix a problem that UBS, a giant of the Swiss banking industry, was having with the IRS. She did so because UBS had donated $600,000 to the Clinton Foundation and paid Bill Clinton $1.5 million for a series of speeches. 9. Hillary lied about Benghazi. She e-mailed her daughter Chelsea that the attack on the consulate was caused by al-Qaeda elements, but she told the families of the four dead Americans and the American people that it was caused by a video. 10. Hillary lied numerous times about her e-mails. 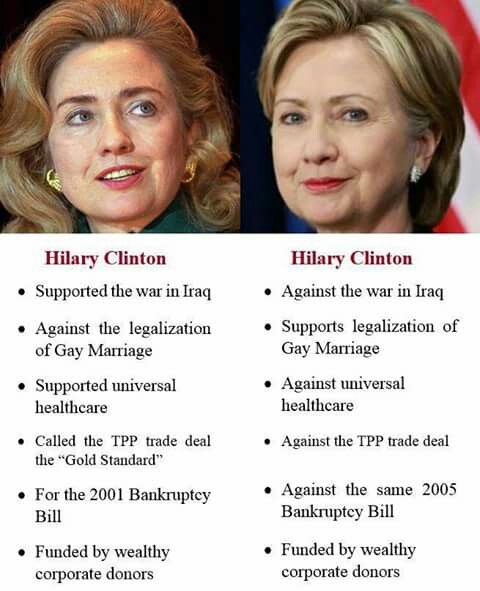 What qualifies you to diagnose dementia?

The brain injury and obvious signs of dimentia just seem to have come on so fast, and so conveniently. Very Reaganesque, in my opinion. Even as a kid, with Iran-Contra, I knew the "I don't remember" was BS, and then of course followed up with Alzheimers, real or not.

Hilary is following the same formula as The Gipper:

The big difference here is that if Hilary is elected, she's got 4 years of presidency ahead. Will she drop the act (if it's an act?) If not, she'll have to be declared unfit. If it's not an act, it will get progressively worse and I don't think she'll make it beyond a year or two at the sudden rate of decline she's demonstrated.

The other option is that an Alzheimer's cure is coming - though list memories unrecoverable will be a side effect. That way, her troubles will be gone with the forgotten memories, and she'll cackle proudly as a medical miracle, and a symbol of hope for older Americans (blech)

Disclaimer: I've decided I'm abstaining. Not willing to risk any chunks of soul aiding either one of their ascent into the seat of power.