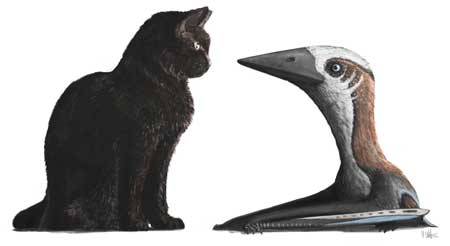 Its size is about that of a cat, and its wingspan is only five feet. The first fossils has just been found on Hornby Island, Canada, hence the creature is referred to as the "Hornby Pterosaur".

The researchers have dated the fossils, and as such the Hornby Pterosaur existed around 83 and 72 million years ago.

according to the source:

posted on Sep, 2 2016 @ 07:13 AM
link
Thanks for posting. Not to many years ago the artist rendition would not have given him pin feathers...

originally posted by: 727Sky
Thanks for posting. Not to many years ago the artist rendition would not have given him pin feathers...


LOL. instead reptile scales? Kind of looks Penguinish to me.

Aquatic flightless 'birds' (with feathers). I sigh every time they find fossil bones and call them something - osaurs.

I can only imagine what animals looked like and how much more diverse it was hundreds of millions of years ago.

originally posted by: odzeandennz
a reply to: swanne

I can only imagine what animals looked like and how much more diverse it was hundreds of millions of years ago.

let me correct myself , 99.99% of all species are which inhabited earth are now extinct.

didnt realize how accurate a simple insight in how many species we'll never know of had to be accurate ...

let me cite my sources too and the papers and metrics and scientists involved....
edit on 2-9-2016 by odzeandennz because: (no reason given)

Didn't mean to come off as correcting u...

I was simply pointing out the awe inspiring number of animals this good earth has seen come and go...

Are you kidding? That thing has an enormous...pecker.

Here's a graph about Earth's Extinction Events you might like to keep, if anyone else wants to get nitpicking with you: 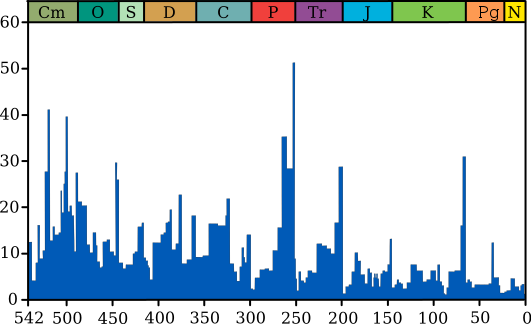 originally posted by: IridiumFlareMadness
a reply to: swanne It has a rather small body, a bit like a toucan.

Yeah... real cute. But they may have had a temper.

Are you kidding? That thing has an enormous...pecker.

You win the Internet for Labor Day 2016

But apparently this creature is more or less a flying head with wings. Funny.