It appears that the same object may have exited from behind the exploding rocket and headed at the same rate of speed, but a lower altitude back to the side of the vid from which it appeared. Below are the frames. I don't think its a bird.....It could be sabotage done with an ultra high speed commercial or military drone for that matter. Or someone who has an ax to grind with Elon M. or Mark Z. or both for that matter. Personally, it's unidentified, and that makes it a run of the mill UFO

P.S. Disregard my living room reflections on my TV....i.e. lampshade on the left in the smoke of the Rocket...pictures where taken right off the TV 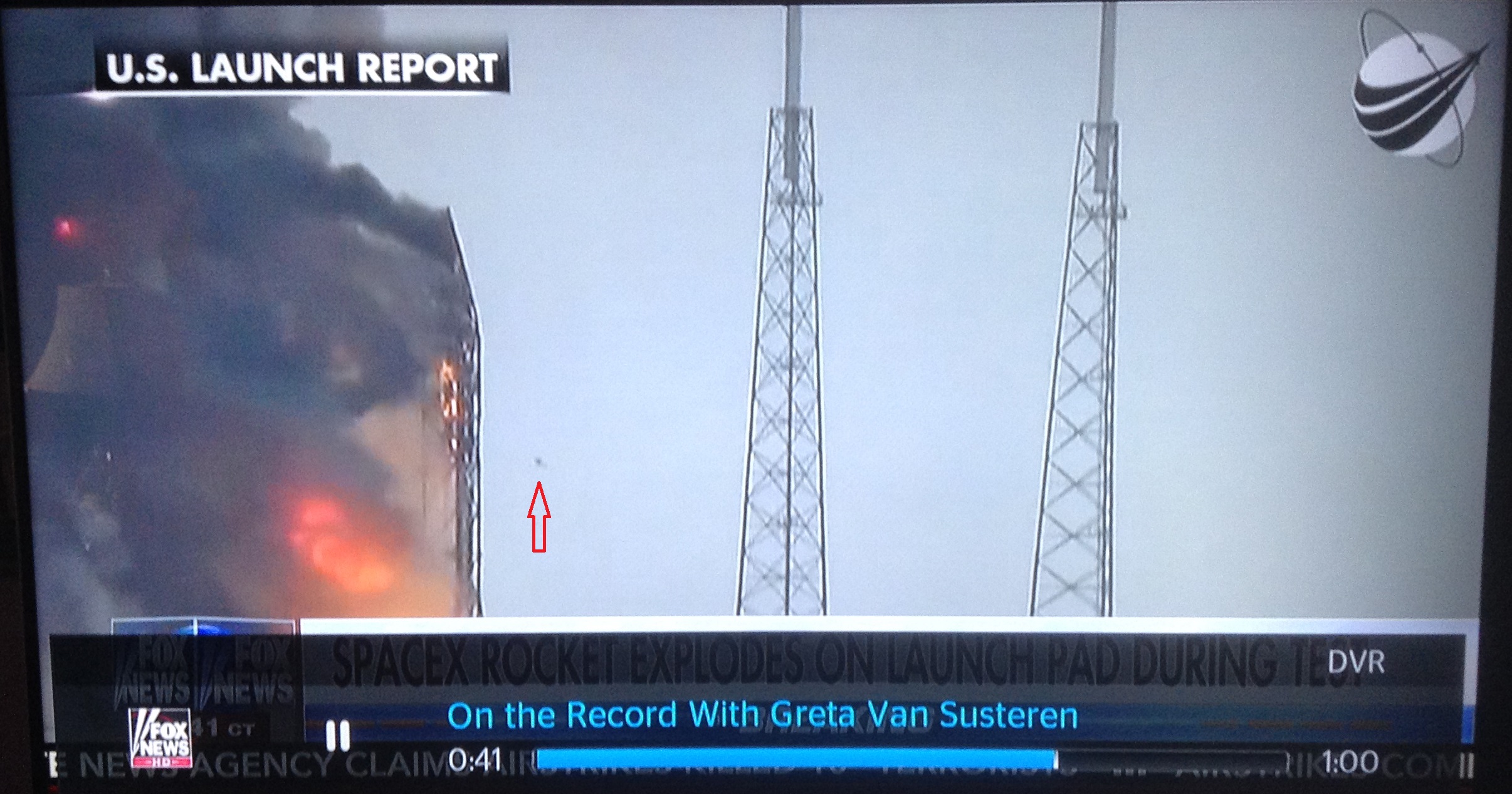 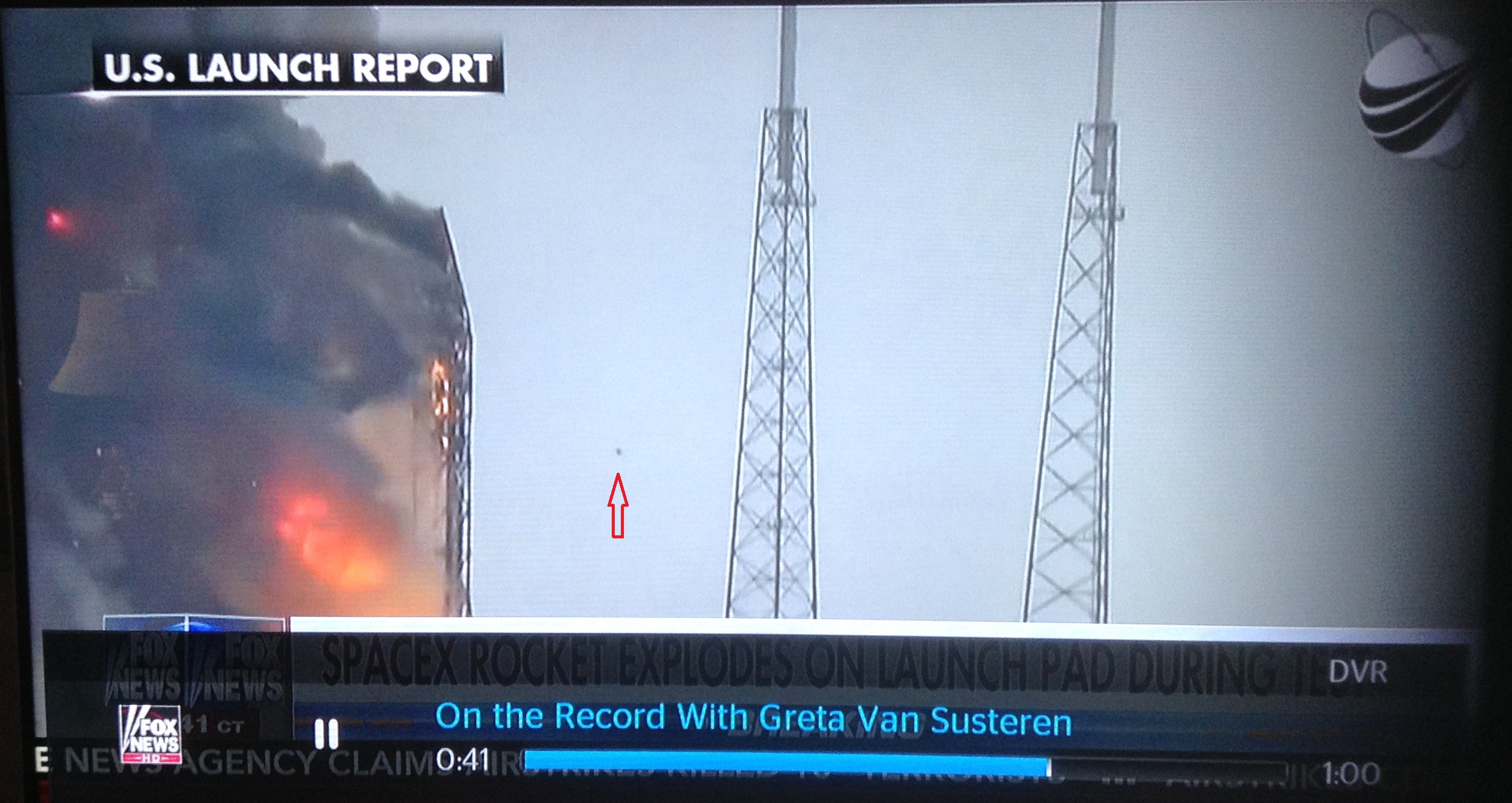 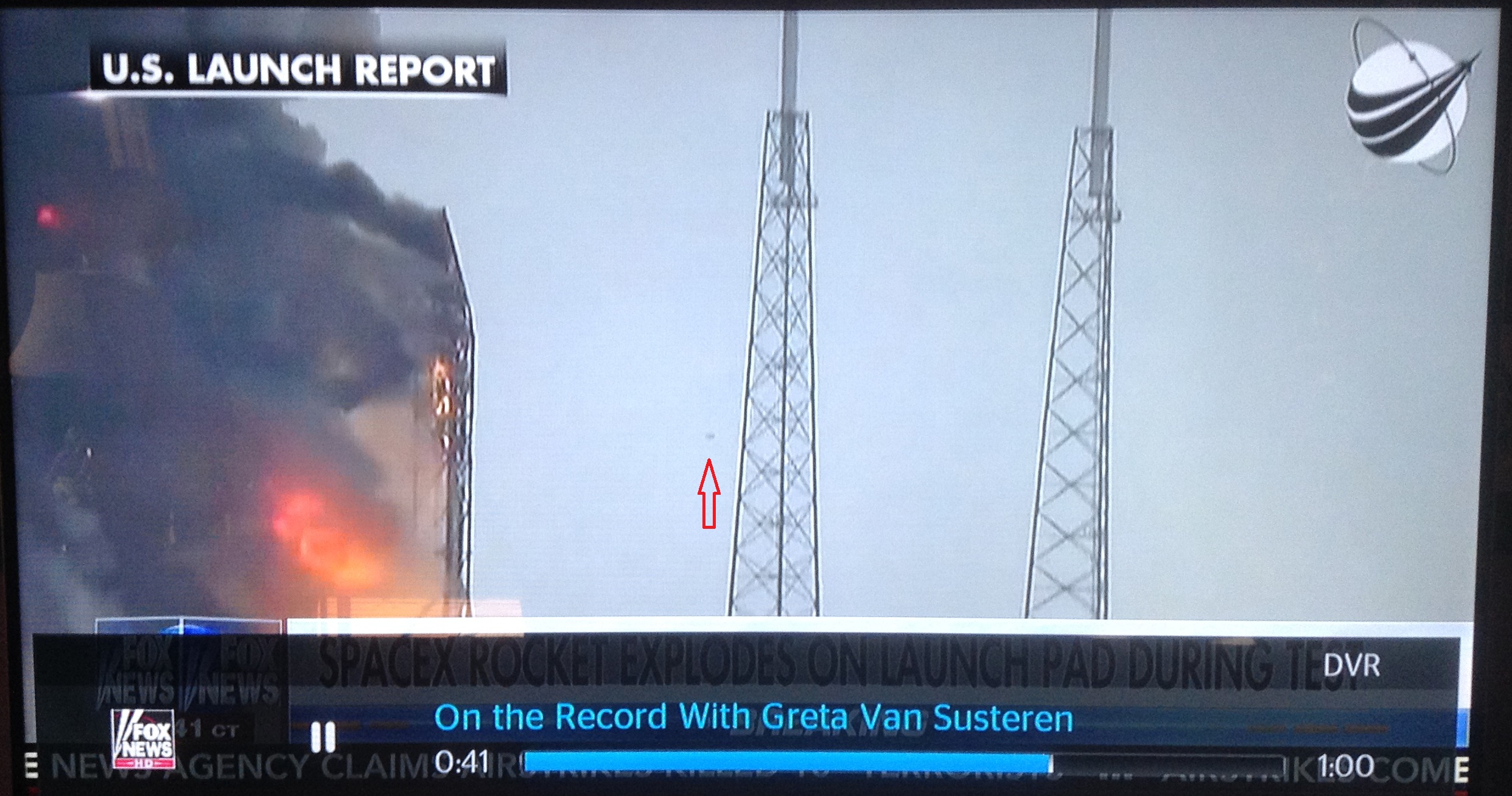 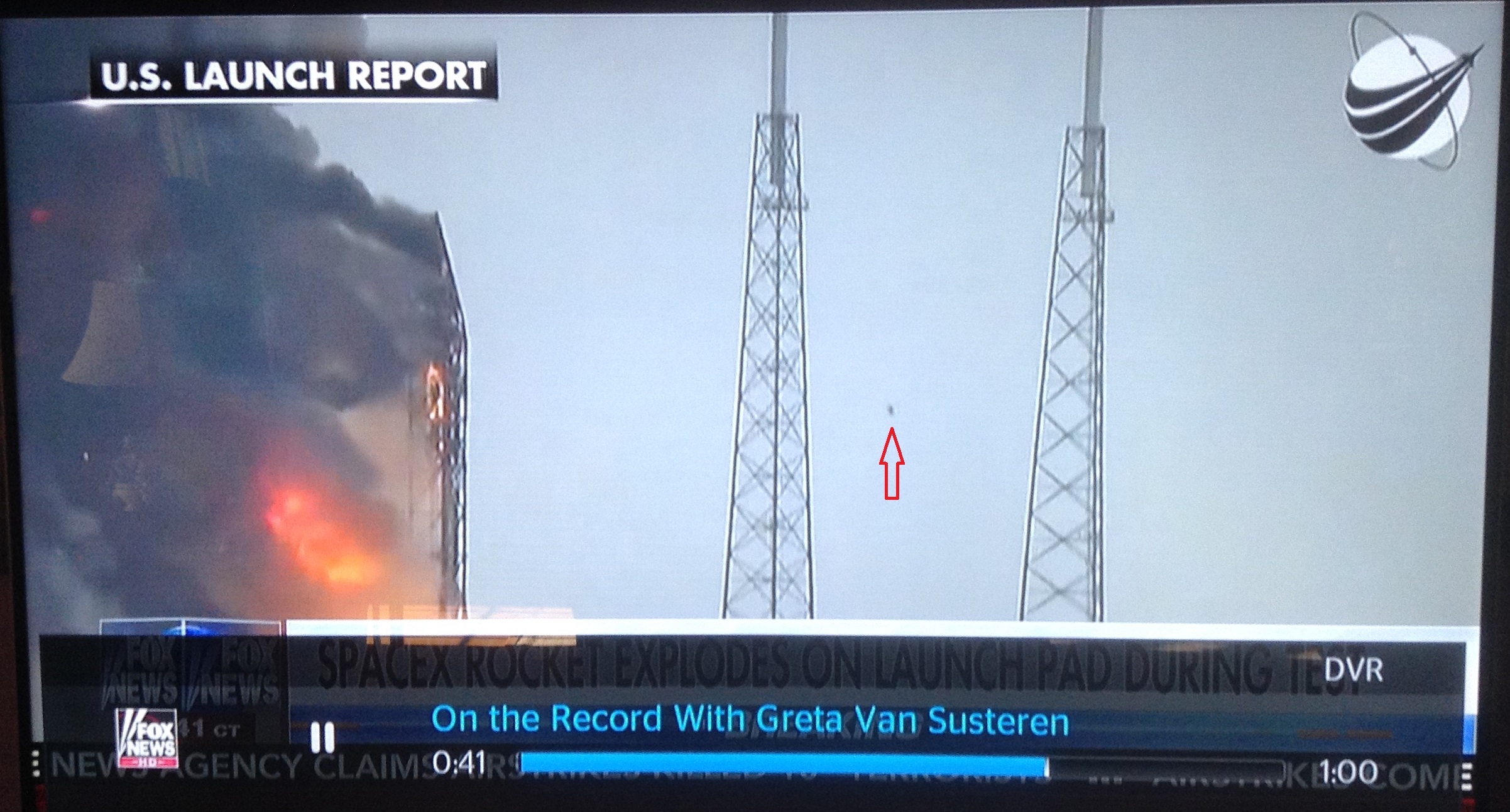 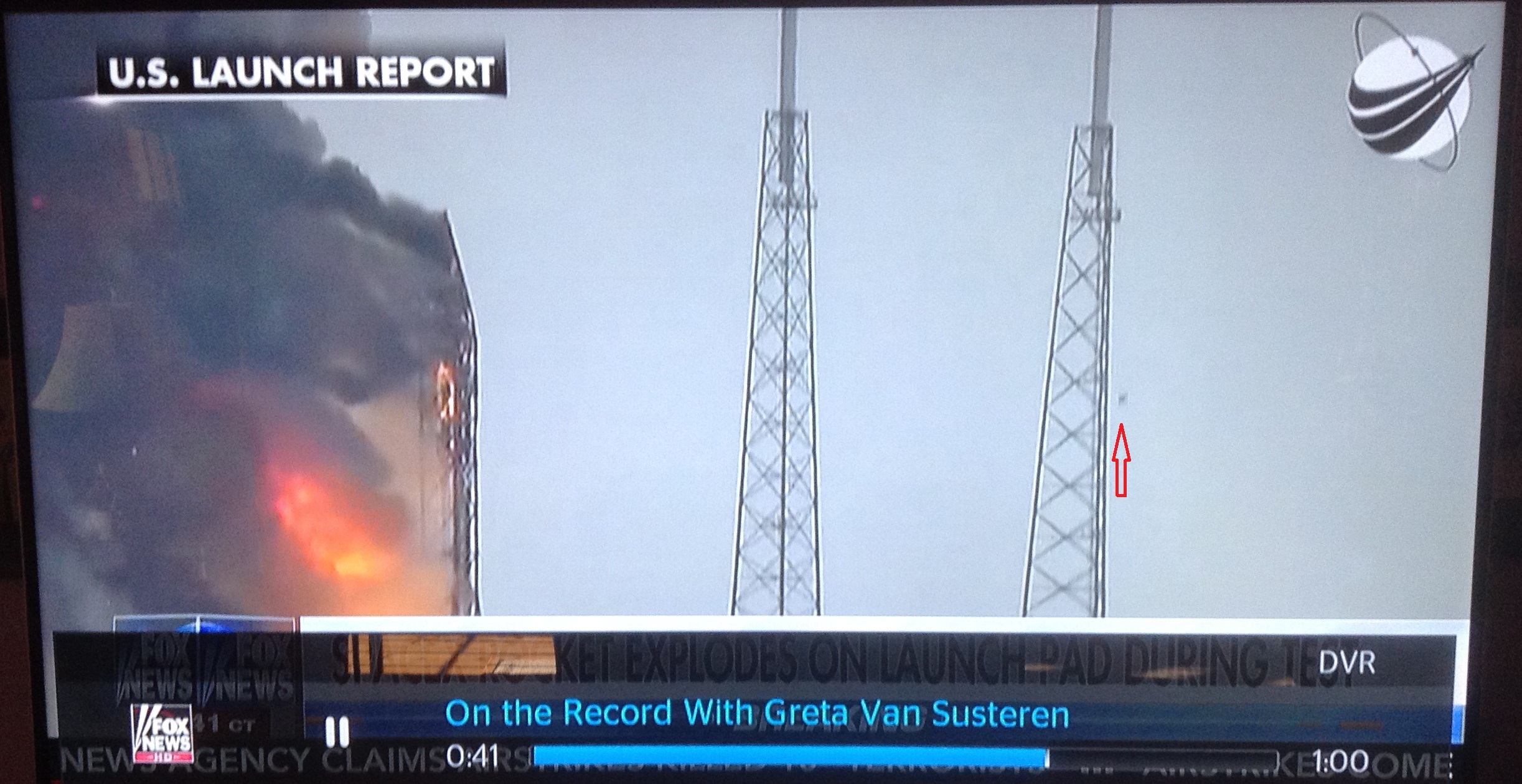 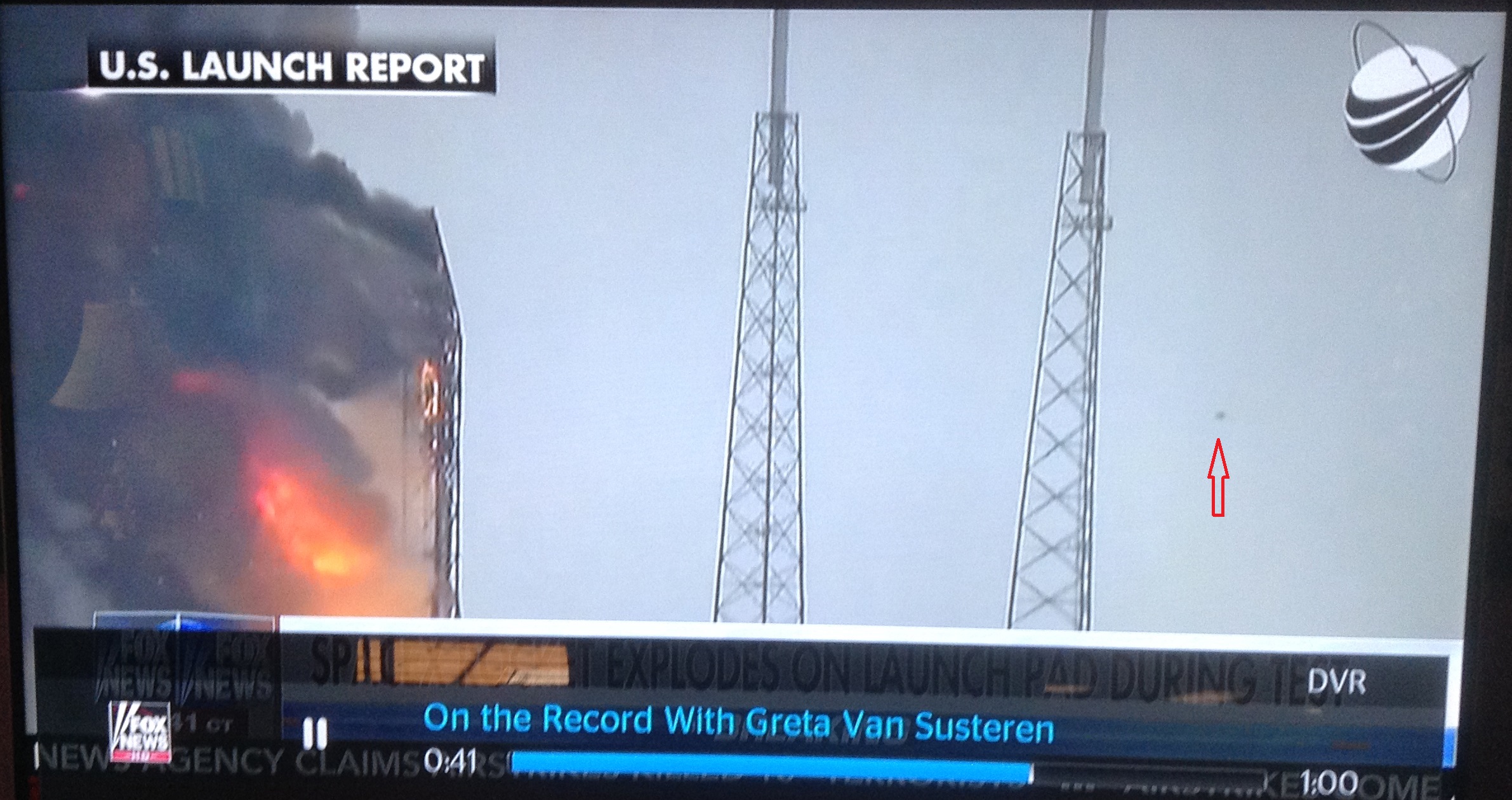 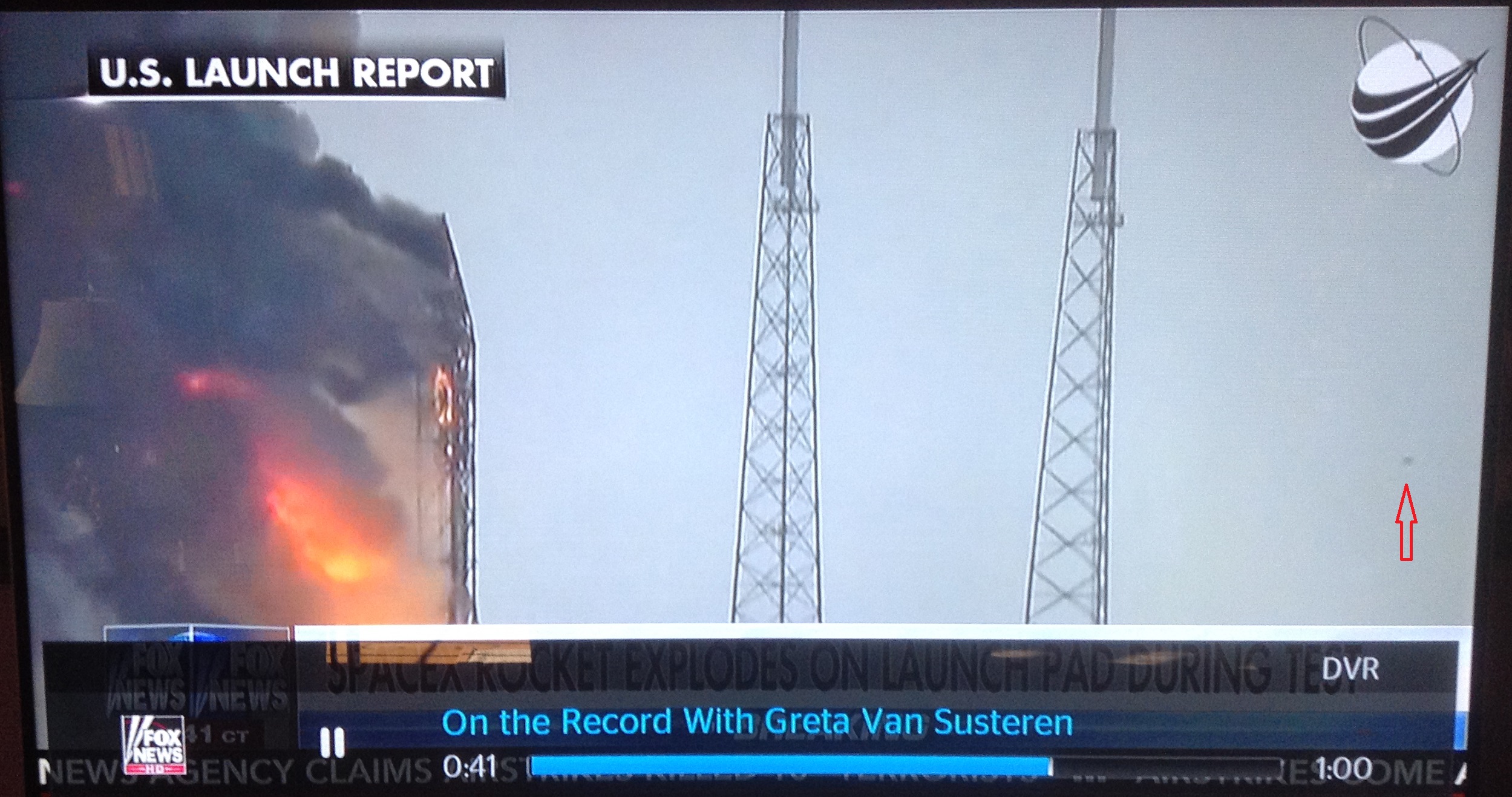 
At the Vatican on Monday, the Facebook founder and CEO, along with his wife, Priscilla Chan, presented Pope Francis with a model of his company's solar-powered drone designed to beam internet connectivity to less developed parts of the world.


www.afr.com...
Maybe the payload of this satellite was unacceptable to Jesus and the aliens?


Anyone that follows DS would take that as a hilarious inside joke.
And for those who don't...in other words, it's spot on.
edit on 2-9-2016 by boncho because: (no reason given)

What surprised me was that the BBC are airing it when you can clearly see the Orb fly past.

posted on Sep, 2 2016 @ 01:02 AM
link
Well considering the recent revelation of Israeli hacking of I-phones the aliens probably did humanity a solid by destroying an Israeli designed "communications" (vacuuming) satellite.

originally posted by: Mianeye
You guys do realize it's a hoax...right.


Slow the video down. It's definitely there.

posted on Sep, 2 2016 @ 02:38 AM
link
During the Iraq War there was footage of an Abrams Tank firing a shell into a building ,after the explosion, a large Black Bat like flying object flew out of the building ,this was on the TV News ,then turning to another Channels News ,to view the ''same '' footage, there was NO flying Bat ????? umm gone ?? nothing was ever said about this or the ''Bat ''

Hmm, you are right.

originally posted by: Mianeye
You guys do realize it's a hoax...right.

What is the blinking light on the tower thingy to the right?

posted on Sep, 2 2016 @ 03:38 AM
link
Looking at the video looks like during fuelIng they got a spark. Probably static not having it grounded properly would be my first guess. But no a UFO wouldn't get near a gugeneral bomb like a launch ricket unless they were really stupid.

But it's undeniably there and behind the towers which allows for a calculation of the minimum size of the thing and after a quick first estimation taking in account the sound delay to the camera... that bird would be huge!
Holy # I haven't been this excited about an UFO sighting for years!

While I was looking deeper into it, guess what:
According to Haaretz There is a deal between Spacecom and Beijing Xinwei under direct control of BigBird managed from Maj.Gen. Shafran.
Wtf?
Luckily there is no backup to the satellite, but it begs the question: wth is going on? Israel and China cooperating with Facebook?

So what are we looking at? US military sabotage on their own soil? A cooperation between US, Israel and China sabotaged by a 4th party? Who could be that? Certainly not Europe as France also had its finger in the project.
I am flabbergasted.

Fun fact about the CEO of Xinwei nobody knows how he suddenly got 37% of the stake.
Wang Jing is of course billionaire and experienced a rather huge set back. He has major interests in HKND group, Hongkong Nicaragua Canal Development Group wanting to become bigger and better than the Panama Canal. An obvious fail. An UK & US interest. Impossible to find information who was the financiers behind that tough. Does someone know?

Are Musk and Zuckerberg traitors? Just business men trapped between US and Chinese interests?

Or is this the trace of this alleged global business conspiracy, to make statepower obsolete?
What is that thing, could it be a drone? Do they come in this roundish superfast shape?


Whoever blew that satellite up: thank you.

UFO's ? I don't believe that. But I believe Musk, Bransom etcetera will not be allowed to go too fast concerning their space program.

Richard Bransom, Elon Musk etcetera ... if they would have been allowed to go their own way by the real rulers they already would have walked on the moon. They are great men but ho so tiny bunnies compared to the real powerful men. Bransom and others have plans to explore space, make tourist tours in space, build hotels, and yes they plan to visit the moon. But be sure they will encounter lots of 'misfortune' on their way. Besides: visiting the moon? It would be under extreme supervision of the real rulers. And we are not sure if Bransom with his rebellious image will accept that. Visiting the moon will not happen with him in pole position, if you ask us.

posted on Sep, 2 2016 @ 05:25 AM
link
Why on earth did the top portion explode, as though it were carrying a warhead? I could understand the fuel tank erupting or something...

Bizarre. It seems more like a ballistic missile defense test. Or perhaps even corporate sabotage.