Floating around the inter webs are numerous accounts of the explosion at Cape Canaveral today, a UFO can be seen in the official video of the test fire, which passes over the space-vessel just as it explodes. After going through numerous sites, and looking at many different analysis, it does appear this is not a bird, or a bug (though some can be seen in the video at earlier and later times). 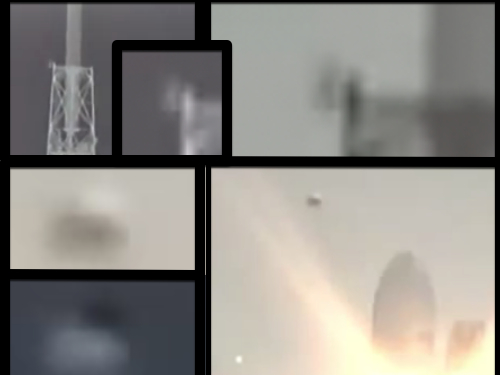 There was also a post on reddit from someone who claims they work on site (as a welder) and earlier in the day (prior to launch) they witnessed UFOs in the sky. They are not allowed to bring phones on site with them, so they had no videos, but offered an account of the disastrous morning:

So This is my first post here long time lurker, But today the Space X rocket blew up on the launch pad if you weren't aware. I am a welder at Kennedy Space Center and before launch a lot of us were noticing strange lights in the sky above the pad. About 20 minutes before launch there was an impression in the clouds (its rainy here) of a oblong shape you could almost see the blue sky through it then 3 white lights appeared in the center of it and then just disappeared with a blink of an eye they were visible for maybe 20 seconds. 20 minutes later the rocket explodes on the pad maybe it's a coincidence I don't know but hopefully some of you have insight unfortunatley I have no pictures. (We are not allowed to have our phones on us in our hanger due to "safety reasons" they stay in our locker till we clock out.)

The payload was officially the Satellite Amos6, a 200M Sat which Zuckerberg/Facebook was launching to "give the world free internet", or at least thats the PR spin on the project.

The Sat was built by Israeli Aerospace Industries and was to be part of the Spacecom satellite network - Check out the coverage map here, operating in the Ku bands, and Ka Spot beams, it was going cover areas which already have Spacecom coverage, mostly Europe & Eastern Europe/Russia.

It's precisely this reason I think there is something more to the story. Supposedly Amos6 would offer redundancy, backup services and increase reliability. Maybe there's something more to the frequencies they are playing with? Anyone got any ideas? I haven't had a chance to look at possible uses yet. They do mention 'New Services'...

IAI is a company far more recognized for its military defense contracting, and it's essentially an arm of the Israeli government. The Israeli government, as most know (or should know) is essentially an arm of the Rothschild's banking cartel. Not only did they design, fund & build Israel's supreme court building, they left their trademark pyramid & eye on site. 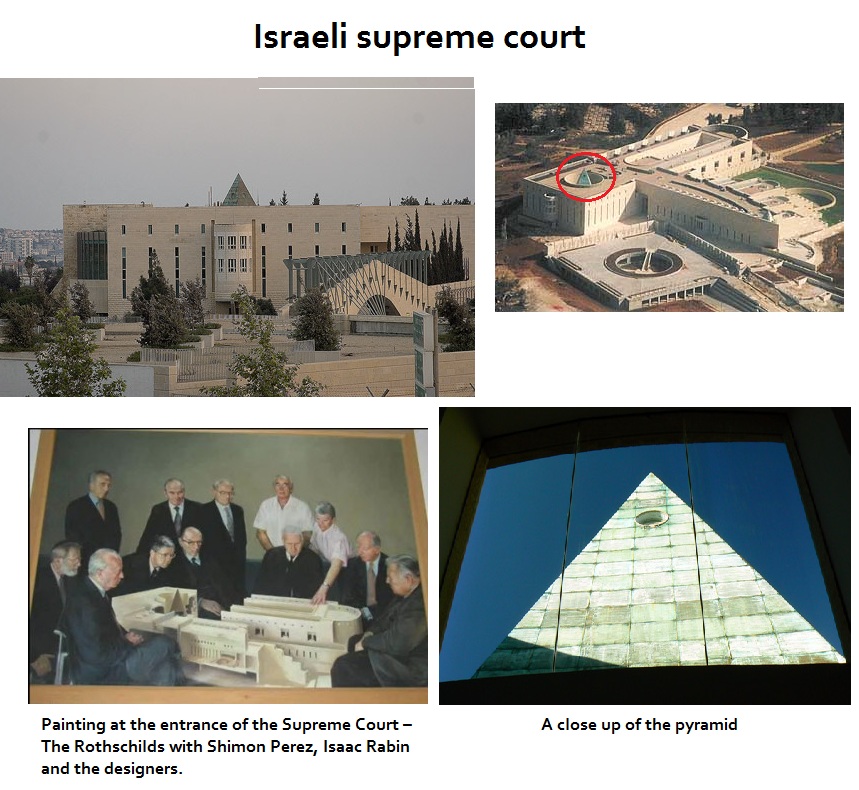 IAI is wholly owned by the government of Israel. 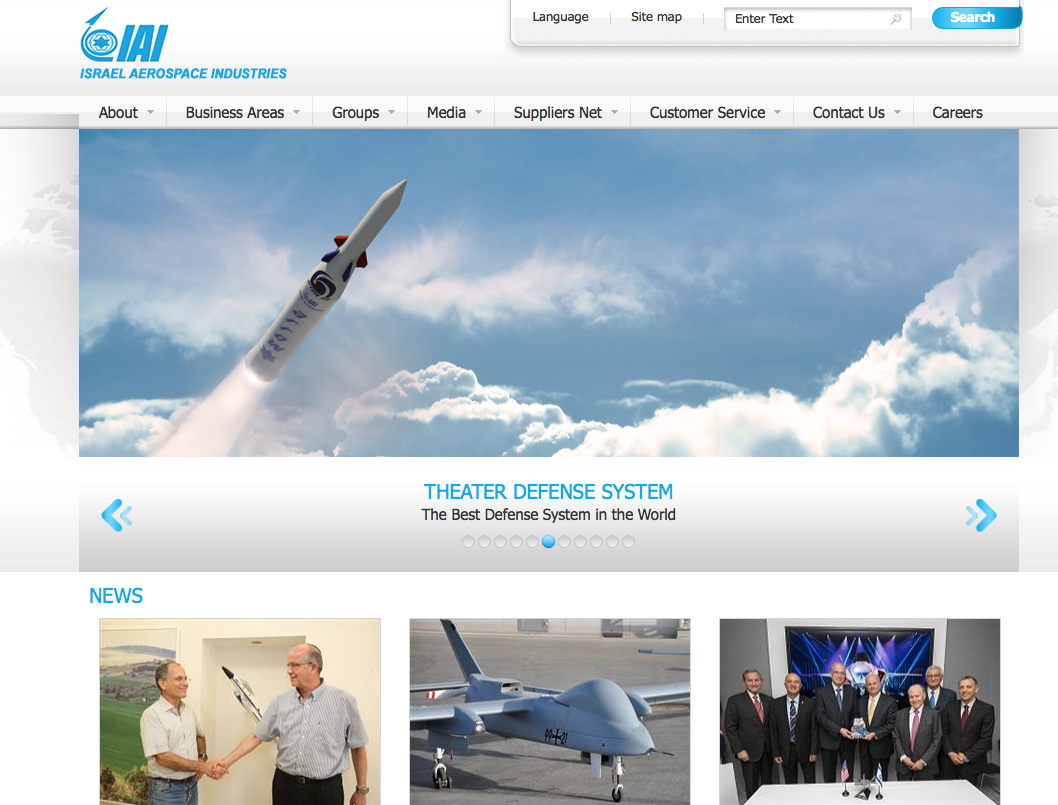 The EU is providing generous R&D (research and development) subsidies to Israel Aerospace Industries (IAI), the state-owned manufacturer of Israeli ‘drones’ and other ‘battlefield solutions’. Some of the grants are for IAI to adapt its killer robots for use within the EU.

In today's dynamic battlefield enabling continuous OTM communication for lower echelon Special Forces and dismounted soldiers, as well as for platoon, company and battalion commanders is imperative. Operations of independent small forces frequently take place in locations which are Beyond-Line-Of-Sight (BLOS). At the present time, these fighting forces rely on either Line-of-Sight (LOS) systems which cannot provide continuous and reliable communications, or on mobile or static BLOS systems. The novel micro-terminal BLOS OTM system enables the existing gap between legacy LOS tactical radios to be closed, and allows for an extension of the current soldier communication network to OTM BLOS. The system is designed for BLOS operations of either mounted or dismounted ground forces. In addition, the same phased array antenna technology is adapted to combat vehicles and airborne systems, using a conformal antenna system.

"Reliable, ubiquitous and continuous lower echelon communication for the land soldier has always been a necessity", Mr. Nissim Hadas, IAI Executive VP & ELTA President explained: "the lack of adequate technical solutions has up until now impaired effective real-time sharing of information. We believe that this solution and others of its type will propel land warrior networking capabilities into the 21st century."

Anyone else have any ideas why the UFOs wanted to nuke the rocket? :inky:

Just wanted to throw in with the anonymity of Reddit , as with all sites, without credinals that can be taken with a grain of salt. The welders statement that is.
Everyone loves Internet points.

UFO though? Technology to destroy rocket silently and without visibly using a weapong. Not enough technology to be invisible to camera? Or accomplish same thing from space. UFO sure, but alien it is not.

Thanks for the read. Headed in to do some reading of this.
edit on 1-9-2016 by StolidPanda because: (no reason given)


Just wanted to throw in with the anonymity of Reddit , as with all sites, without credinals that can be taken with a grain of salt

Absolutely, might be worth putting a disclaimer in. See if I have enough space left...

At the Vatican on Monday, the Facebook founder and CEO, along with his wife, Priscilla Chan, presented Pope Francis with a model of his company's solar-powered drone designed to beam internet connectivity to less developed parts of the world.

Maybe the payload of this satellite was unacceptable to Jesus and the aliens?

edit on 1-9-2016 by Sublimecraft because: clarification


Check out The UK's current on line issue of the "Daily Mail." The shiny ball is there also, moving across from right to left behind the rocket. But of course, we don't know of who supplied the video.

Thanks for the info. I'll give it a look.

posted on Sep, 1 2016 @ 11:47 PM
link
Was it a bad idea to let the world know what was being launched? Maybe corporations should start doing Top Secret launches like the military.

The UFO could have been a secret man-made weapon that emitted something to scramble the rocket's circuitry at just the right time..ya think?

Does not bode well for the neo consertaive agenda and clintons team as those things are not cheep, unless it was just a dummy rocket and another theatrical event.

Of all the ways to take out a satellite it does send a message to the humans.

coldkidc
+7 more
posted on Sep, 2 2016 @ 12:04 AM
link
Interesting footage...if that's what caused the explosion I doubt it was aliens
Much more likely a foreign government or some other influential group with a motive.

Wouldn't it be crazy if nothing was on the rocket...kaboom, 200 million gone with no need to account for it....probably nothing, just a thought.

posted on Sep, 2 2016 @ 12:09 AM
link
It could easily be a drone in my opinion, not sure about it causing the explosion but the timing is pretty weird. Maybe a drone with some kind of technology that shorts out circuits remotely or something?

Here's a video of a drone that is pretty damn fast, you can barely even keep up with it on screen.

Thanks for sharing, I think it's a possibility that the object may have helped in the explosion but I don't think it's extraterrestrial in nature.

Ectoplasm8
+2 more
posted on Sep, 2 2016 @ 12:09 AM
link
SpaceX is known to use hexacopter drones and others to film their launches and landings. A good possibility it's a drone circling and filming the launch.

a reply to: 3NL1GHT3N3D1
^I think we hit reply a few seconds apart^

I think this is the most likely explanation. The timing could just be coincidence and people are making a mountain out of a mole hill.

Oh wait, this is the internet, that NEVER happens.

what ever it is it does a 180 and flys past again during the explosion.. come from left to right

Also, I did a tour of NASA last year, they explained why the towers are there and the meta steel mesh above the rocket..

it removes static, because the static charge could cause an explosion.

so, if it a drone that's not for filming purposes and was zooming a million miles an hour, perhaps it could have disrupted the static

but, why would NASA/SpaceX allow a drone that has 0 purpose to be flying around the rocket ?

I agree that it is probably a bird. Much more plausible than an alien craft or some weapon.

Any other angles showing the UFO?

If as you say it flew over the rocket, then every camera watching the launch should spot it...

Boncho I just posted in the original thread about this but, if no one has informed you yet there are TWO objects one enters via the near bottom right hand side of the screen approximately two seconds (1:09) before the anomaly addressed in your OP not sure what they are. Too strange.

I noticed it immediately, looked like the orb I witnessed in Lincolnshire.