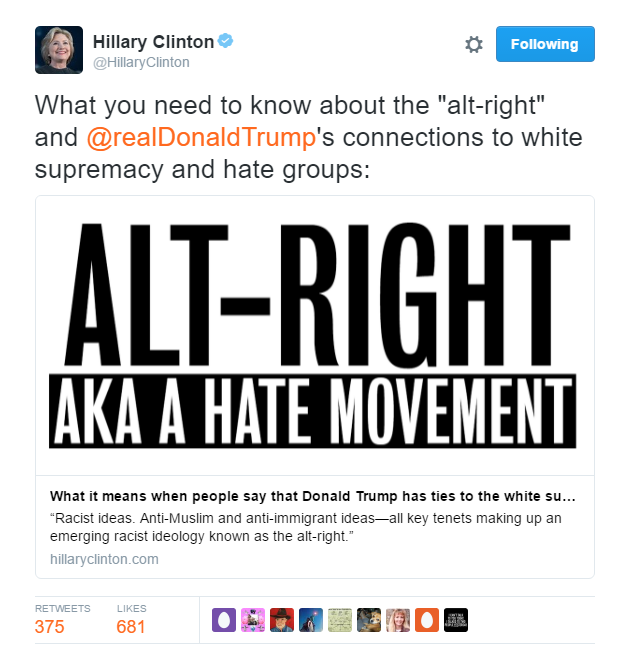 So, Hillary has just unlocked a new level of human hypocrisy vis-a-vis her comment about Alex Jones and conspiracy theorists from the dark corners of the internet and Putin and Trump then she comes out with this conspiracy she pulled out of her server and her gimps are attempting to ram down the planets throat this past week that the alt-right is full of all the little nastys of society.

Below is a reasonable commentary on what constitutes what Hillary has labeled alt-right, linked at the end and it's a very good read imo.

There is no alt-right manifesto as far as I can tell, but three main ideas seem to unite the movement:

(1) Exasperation with establishment conservatism. The alt-right calls them the “respectable right” These are the gatekeepers at National Review and Fox News who marginalize the alt-right and their intellectual progenitors for the sake of mainstream respectability. They are, in the alt-right narrative — the “crony” web of institutions, pundits, and politicians which share the blame for America’s decline.

(3) Fear about the direction of Western Civilization: The alt-right’s edgy commentary on race and gender is more than an attack on political correctness. It stems from a worldview that sees Western Civilization as fragile and besieged. According to the alt-right, the erosion of traditional values could spell the end of a heritage worth preserving. What unites the laundry list of the alt-right’s enemies — illegal immigrants, feminists, multinational corporations etc. — is a commitment to liberal, globalist ideologies that the alt-right regards as more than naïve and distasteful. In the alt-right view, they pose an existential threat.

For these reasons, the alt-right considers Donald Trump to be a fellow-traveler and an imperfect messenger for its ideas.

Who is Hillary Clinton?

Yay more labeled boxes! I like to think I live on a round earth and cant fit into a cubed box.

Your OP title has me splitting a rib btw! S&F

While Hillary herself would never stoop to beating a dead horse, she has her people do it for her.

Doctor Frankenstein had better luck resurrecting the dead than Hillary does trying to bring this story to life.

This "alt-right" thing, that's the MSM label, correct? I mean did any of these supposed people 'part of it' even say that before they did?

Who is Hillary Clinton?

No one important, you're not missing much, I think its rantings resultant from the initial onset of dementia for the old biddy.

She likes her conspiracies - she started this one about the alt-right.

I started a twitter account this month under my ATS handle and have been firing off tweets to The Don, Hills, Shapiro and anyone else I can stick it to. Bloody good fun. Keeps me well on top of the latest shenananananananigans.
edit on 30-8-2016 by Sublimecraft because: (no reason given)

I wonder who her husband was forcing himself onto while hillary was twitting this.

posted on Aug, 30 2016 @ 10:15 PM
link
Are the alt right truly bad people as the MSM appear to make them out to be? I ask because there is little to no official information about the "movement" and according to Wikipedia they have no official or unified ideology.

Something she can pretend to be heroically battling.

(she seems a little old for larping,though)

Have you see the guy lately? Those days are done, he couldn't force himself on a paraplegic these days.

LesMisanthrope
+9 more
posted on Aug, 30 2016 @ 10:20 PM
link
I was wondering what this "alt-right" was, and once I took a look, I found it to be nothing more than a hashtag on Twitter, I guess the right-wing equivalent of #BLM. But it's not any sort of group as far as I can tell. I see no gathering of alt-rights anywhere, no core philosophy, no leadership, no membership, just a Hilary Clinton bogey-man.

Clinton has been triggered by trolls, fearing for the loss of her politically correct orthodoxy, as opposed to some dangerous group, and is using the techniques of Goebbels to incite violence and hatred of a rag-tag group of Twitter users and obscure media personalities.

They're like a hundred, a hundred and twenty guys
that started a movement. No attitude. Just good fam.

Probably wouldn't be the first time he had the ss hold someone down for him. (or get rid of)

The alt right exists(well it exists enough as an idea), but appear to be a nationalistic type which of course is connected to some rather negative ideas in history, but in itself isn't bad.

To my understanding alt right care about nationalism, the state of the nation, immigration. As well as being anti-establishment. I've seen nothing of what they think of foreign policy.

The "alt right" does sound like a good hash tag to pretend to be battling.

Will she offer them some of her hot sauce?


Will she offer them some of her hot sauce?

That right there is cultural appropriation, sir or ma'am... Or ze or zey, or zebra.. I give up.

Maybe she should stick to crackers or something.

The CTR members here were just a minute a ago fix'n to post an mega thread "Alt-Right Exposed!"

And you go and jump them...bigtime!!