Political correctness... will it ever end?

posted on Aug, 29 2016 @ 06:55 PM
link
As you're probably aware, the new "contreversery," that's hitting the nation is the dude who didn't stand during the national anthem.

I'll be honest, I don't really care about celebrities nor athletes, and don't see their opinion as being any more "credible," than any average Joe, but others seem to hold a different belief.

I won't bother rehashing the details of this "event," but there's a point to be made here that is seemingly glossed over.

Many people are "absolutely outraged," at the fact that this dude didn't stand during the national anthem.

I have to say it, and I know it's not a popular opinion, but here we go - yet again - with the PC crowd.

From the people crying out that "if you don't stand for the national anthem, you can get the # out!," have we not had enough of censorship and dictating to fellow free Americans what they can and cannot do?

I'll be honest I'm biased - I hardly see an issue with this, and while I was in school, I never "put my hand over my heart," and I NEVER recited "the Pledge of Allegiance." If one has a problem with that... perhaps they should consider moving to a country that has forced flag worshipping and the likes?

I jest, of course, but this is the attitude of the PC-crowd that has to fake outrage anytime anything "un-American," happens. What is truly un-American is stifling the freedom of free adults because one doesn't necessarily agree with them, especially in this case considering it was a harmless act that was not aggressive in the least.

Perhaps the rant forum would have been more appropriate, but this "event," (the reason for quotations is that it's hardly an event), but I'm getting so tired/annoyed with people faking outrage over very menial non-events.

Freedom of speech should mean something more than a political hit-piece and talking point. It should be a value to be upheld even when and ESPECIALLY when one does not necessarily agree with it.

Those who want to take away others freedom of speech should have no quarrel when it comes to others taking theirs away. Whether it be in the form of guns, or something as stupid and trivial as not standing during an anthem, it stands to reason - freedom is freedom.

The PC crowd that wants to stifle that freedom, and twist and distort it under the guise of "offense," should not be taken seriously, and those who stand for principles of individualistic freedom should stand behind those who refuse to stand for the national anthem - even if you disagree with it.

Like any ideal, when taken too far it becomes extremist. And yes the PC crowd are getting on my goat too. For me it is the new genderless student terms at schools that is making my blood boil. Apparently because of less than 1% of students who might not identify as the boy or a girl they were born as, none of us can be called that any more.

Lunacy takes root in our education system yet again.

Huh? What does not standing during the anthem have to do with being PC?

I'm getting so tired/annoyed with people faking outrage over very menial non-events.

The real question is, when will conservatives stop crying about political correctness?
edit on 29-8-2016 by Swills because: (no reason given)

When the snowfl, er...Liberals stop whining about everything that doesn't fit their idea of "correct".
edit on 29-8-2016 by DAVID64 because: cause the snowflakes don't like being called snowflakes

You know, is the name calling and labeling really necessary? It's hard to take anyone seriously when they are calling you names, you know?

originally posted by: Swills
a reply to: RomeByFire

Huh? What does not standing during the anthem have to do with being PC?

I'm getting so tired/annoyed with people faking outrage over very menial non-events.

The real question is, when will conservatives stop crying about political correctness?

Not sure what your other statement means, tbh. I'm not a conservative, and I rarely complain/whine about PC. I have thick skin and really don't care what consenting and free adults do or say, as long as they're not inflicting harm upon others. Those who do, however, are the topic of my OP and how annoying it has become.

To make it short, not standing during the anthem/pledge is an Americans right. Those who wish to complain or censor such acts are advocating for the PC non-sense that many are currently detesting.

Wait, so it is or it isn't about being PC? Regardless, every time someone does this, especially if they're famous, people get upset but plenty of people don't care. If they wanna waste their time being upset about a man not standing during the anthem chances are they get upset about a lot of things. So nothing we can do about that except ignore it, kinda like you do with a child.

My last statement was just a general one about conservatives and their ramblings about PC and everything that comes along with it. I have no clue where you stand politically, who ya voting for? I'm going 3rd party.

We all know you mean me and anyone who isn't a conservative. In any case, it's used way to often and like I said, it's unproductive. And now we're OT, see what I mean?

In the spirit of being OT, I think this site is currently being DDOS.
edit on 29-8-2016 by Swills because: (no reason given)

posted on Aug, 29 2016 @ 07:26 PM
link
He needs to retain his freedom to do what he wants in the name of speech because someday we might need this guy: 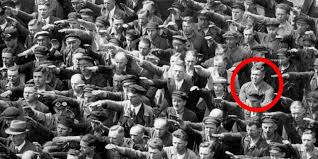 However, I do not in any way, shape or form think that Kaepernick represents that guy.

However, the irony of a black man who was raised and educated by whites (adopted if I recall correctly, but I could be wrong) and received his education and upbringing in a far different world than the people he is claiming to represent while he now makes multi-millions ... and the best he can muster to be "down with the struggle" is to not bother to stand, is kind of entertaining.

I wonder how much of his money he has put where his mouth is? I suppose could be surprised and those would be the happiest words I would ever eat.
edit on 29-8-2016 by ketsuko because: (no reason given)

posted on Aug, 29 2016 @ 07:27 PM
link
The pc has been existent for a very long time, the late George carlin started talking about it in the sixties, how words where changed so they would have less impact on the listener