I just made my moon finding public, I been working for some time creating a presentation about the abnormalities I found near Dugan crater using Google earth.

There appears to be some kind of activity in that area.. there are lots of abnormalities, structures, roads, bridges, pipeline and strange formations.
I would love to hear what the people of ATS think of this.

I know a lot would point out its just my imagination because some of the abnormalities are well hidden with some kind of blur, but I believe its still possible to make out points of interest. 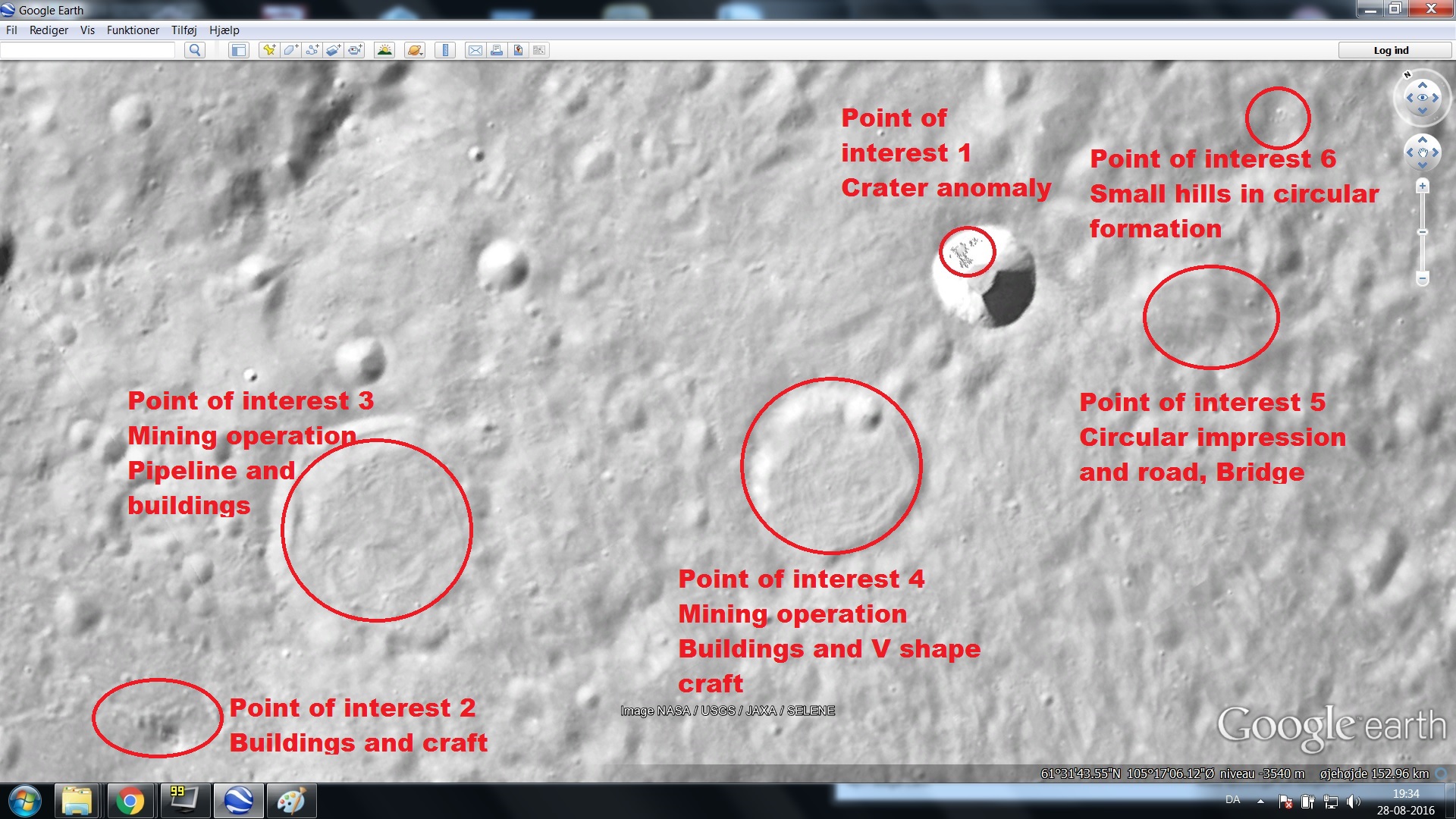 Here is my presentation

I just wasted 8:20 of my life, but thats OK as its a Bank Holiday weekend here and i'm kicking my heels

Sorry, not seeing what you are seeing

LROC has some great imaging of the area along with explanations for the terrain.

The only thing i have to say is, Google Earth( Moon ) is so full of glitches and errors and low resolution that it's useless to use as anything that could show structures.

My specialty was photogrammetry and photo interpretation.

I do not see what your mind is seeing based on my years of experience.

There are much more interesting and debateable looking lunar sites elsewhere.


There are much more interesting and debateable looking lunar sites elsewhere.

I am not exactly sure what I was looking at, but I enjoyed the video.

originally posted by: odzeandennz
Somehow i knew i wouldnt see anything suggested in the thread title... but i clicked on it anyway... and i just wrote what i did.
Can I get a refund?

Care to explain my point of interest 1, then ?
What is hiding in that crater ?

And what about the circular patterns ?

what about the clearly visible pipeline in the video that got some kind of clams to hold it into place ?

I once saw a beam of light coming from the far left side of the moon, near Petavius crater. It went back and forth. and here's Japan's view of some of it: Nothing there either, or in Kaguya's 3D GIS version: Link to those sources please

China's data are all here:

You will need a viewer to see and save the images - nasaview works for me, which you can get here:

The area you looked at is covered by subdivision C10 - nasaview tends to show only part of the view each time, so choose 'next lines' in the nasaview menu to save the next part. Use GIMP or Photoshop or whatever to join the two halves together

and again you'll need their own image viewer to get the images to work:

The best ones to work with are the Morning and Evening Maps from the Lunar Imager/Spectrometer.

The 3D GIS viewer is also available from the first JAXA link and works a lot like Google Earth. I just took a screengrab for my image.

And of course you could always use the LRO

It answered my question as to why "point of interest 1" stood out in such sharp contrast to the rest of the topography.

It also brings up the question: Why can't/won't NASA provide clear photos of this area like China and Japan do?


Seems it would help eliminate confusion, misidentification and good intentions by Moon anomaly hunters being misdirected.

They do - check out the LRO link I also provided, they are of much higher resolution than any other probes. I didn't bother with images from the LRO because I know many people (I am not one) have a pathological distrust of NASA. Had the OP's areas of interest been a little further north you could also have had India's Chandrayaan data to play with too.

Just for fun, here are close ups from another of the Kaguya imaging tools of POI 1: These are each just composites of 4 of the thumbnails from the images, rather than the higher resolution images available. originally posted by: OneBigMonkeyToo
I was bored - POI 3:

Same here POI 3, those articles described as building are craters, seeable even in the OP's picture which is blindingly...and I mean blindingly overexposed.

It also brings up the question: Why can't/won't NASA provide clear photos of this area like China and Japan do?

As OneBigMonkey pointed out, NASA's LRO (Lunar Reconnaissance Orbiter) images of the Moon are the highest resolution pictures of the Moon ever taken. Some of the objects that could be resolved on NASA's images are just a little larger than a basketball -- think the size of individual rocks that could be picked up by a human. The Chinese and Japanese images cannot reach that level of detailed resolution.

EDIT TO ADD IMAGES:
Here is a mosaic of images of Dugan J crater (the OP's Point of Interest 1) taken by NASA's Lunar Reconnaissance Orbiter (LRO); all images are property of the Arizona State University who are the principle investigators on the images from the LRO camera (or LROC), and the provider of the LROC. The highest resolution of the images in this mosaic is 16 meters per pixel: 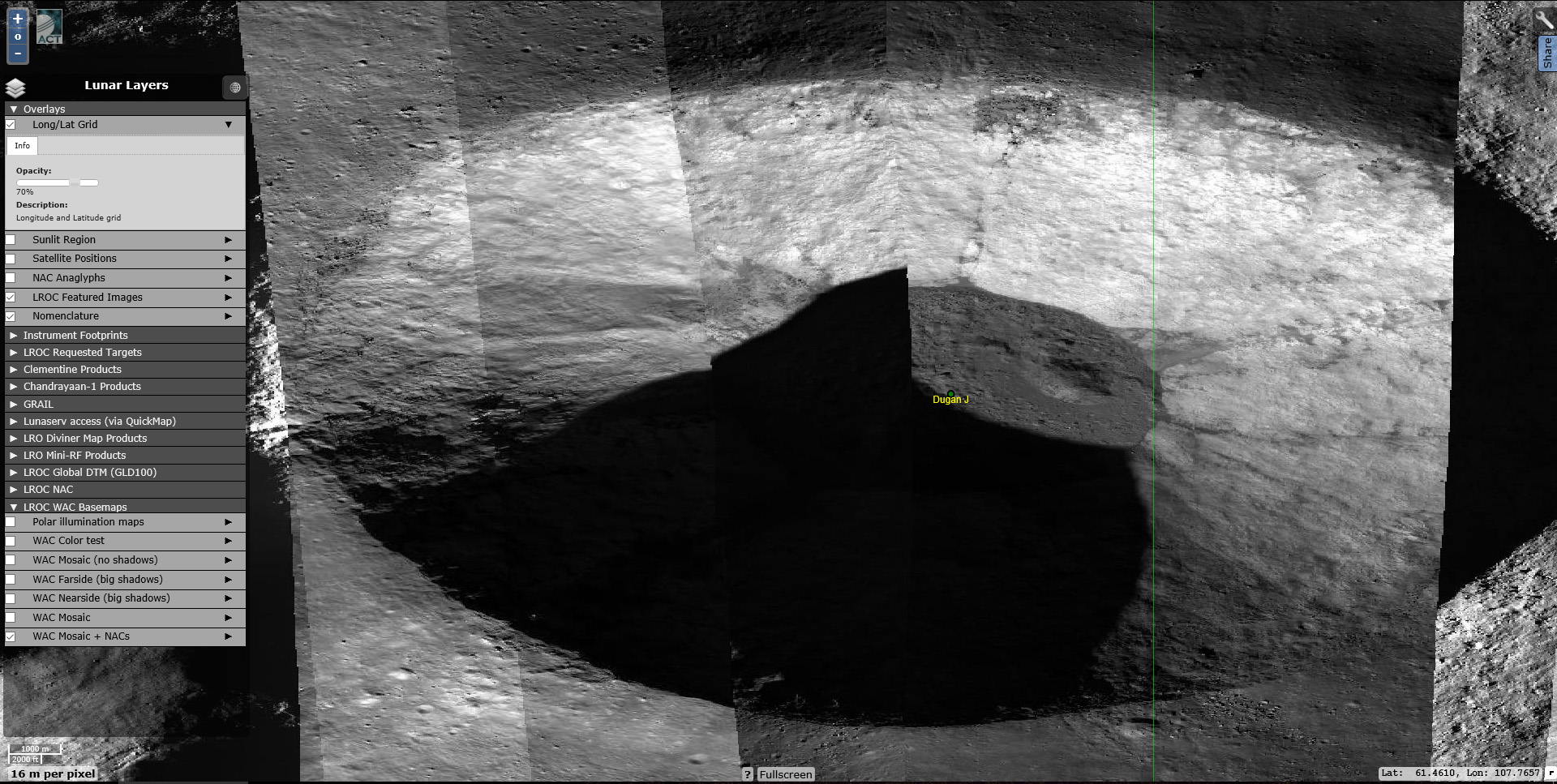 
Using the viewing software provided by the Arizona State University, you can zoom into the image to get even higher resolution. This second image is of the area of POI 1 in the OP that was deemed an anomaly (along the walls of the crater; the "upper" portion of the image above). The resolution of this image is 1 meter per pixel: 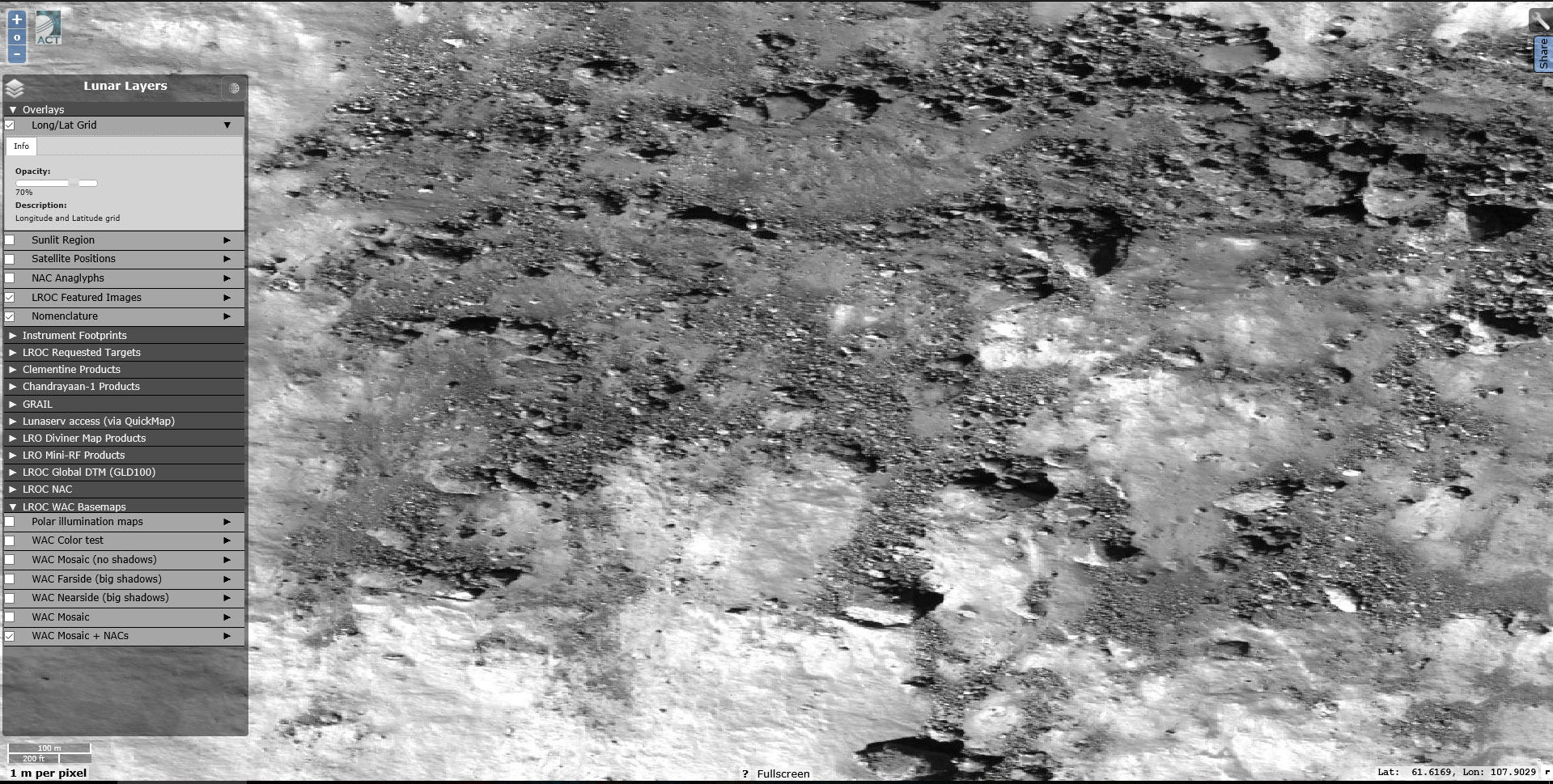 A fellow photogrammetrist! Although mine isn't nearly as cool as moon mapping, but I use pix4d and virtual surveyor. I'm a mining engineer and on my days off, I run my own aerial survey company.

As for the video - I'm having a hard time seeing these as well.

I just made my moon finding public, I been working for some time creating a presentation about the abnormalities I found near Dugan crater using Google earth.

There appears to be some kind of activity in that area.. there are lots of abnormalities, structures, roads, bridges, pipeline and strange formations.
I would love to hear what the people of ATS think of this.

I know a lot would point out its just my imagination because some of the abnormalities are well hidden with some kind of blur, but I believe its still possible to make out points of interest.
snip


Shades of George Leonard, Fred Steckling, et al! I was just transported, momentarily, to the early '80s when I got involved with alleged lunar anomalies based on the books of those 2 authors and the follow-up wannabes. Like corblimeyguvnor says in a reply, I also just wasted time watching the OP's video but I didn't fall for it and after "Point of interest 6" at :50 seconds I was out of there!

You are deluded if you really think that you see the above. NOTHING you describe is visible and your thread is a joke on the members of this forum. And you got flags! Dementia is rampant here.

At least the above mentioned authors used Lunar Orbiter photos which better than Google Moon still showed nothing that was claimed.

The more you zoomed in the blurrier the image got. But you saved the day, you drew lines and added colors to highlight what is not visible! You can't say that lunar "aliens" are performing mining operations. It's been done. It's old hat!

I suggest you do an ATS search for lunar anomalies and see all of the efforts of others which, like yours, led nowhere.