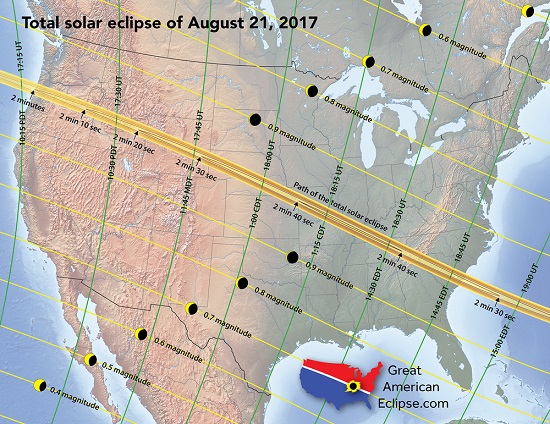 
There are three main types of eclipses:

Total: -- The sun and moon align perfectly so that the moon completely covers the entire disc of the sun (the moon is close-enough to the Earth, the Earth far enough away from the sun). Effectively "blacking out" the sun, creating the darkest possible conditions during the totality phase of an eclipse.

Partial: -- The sun and moon do not completely align. The moon only covers the disc of the sun partially before moving on.

Annular: -- The sun and moon align perfectly. But, the moon doesn't completely cover the disc of the sun due to the distance of the sun, moon, and Earth from each other at the time of an annular eclipse (Earth being closer to the sun, moon being farther away from Earth, or both). The sun is showing around the moon like a ring in the sky.


So, while we've had other types of solar eclipses since 1979, we have not had a total solar eclipse since then where the moon completely blacks out the sun.

I've been planning this for a couple years already. At the time of this post, you have a year to plan, yourself. The map posted above shows the path of greatest totality through the country. The locations within the "2-min 40-sec" band (Missouri to Tennessee) is the area I'm aiming for come next year.

There are a couple of great websites with a plethora of information regarding this eclipse. With tons of maps, cities within the totality zone, etc., to help make your planning go smoother. Both sites also have countdown clocks so that you can get more excited as the date draws near:


So, start planning ahead now, and enjoy one of the most stellar celestial events that a human being can witness with their own eyes come August 21, 2017!

originally posted by: tikbalang
a reply to: _BoneZ_


Lol, there will be, no doubt, plenty of that in the coming months up to the time of eclipse.

posted on Aug, 27 2016 @ 04:59 PM
link
Solar eclipses are so trippy, shadows have shadows. Thanks for the heads up, need to make sure to request that day off of work.

Husband is thinking about talking to his company's officials. They've not allowed family on campus due to security for a while, but they have been talking about an open house kind of day. Hubby is thinking of mentioning this as the perfect day and event to host it. They town he works in is just a bit further north of KC where we live and should be squarely under the path of totality where KC is right on the edge. Totality is hitting right about lunch time.

If all goes well, we will be viewing it on a private corporate campus with no competition from outsiders and tourists.

Nice! I'm in NorCal and will probably head up to Oregon for the eclipse.

originally posted by: Nickn3
Wonderful, it comes right over my home town at 2:30 pm.

Isn't it nice to feel lucky for a change?

posted on Aug, 27 2016 @ 05:46 PM
link
The great American eclipse looks like a plan for a great American railways. Did I just make the connection?
a reply to: _BoneZ_

posted on Aug, 27 2016 @ 06:28 PM
link
I live only about an hour away from Saint Joseph, Missouri, a prime location to view this thing, and I still have my welding glass from the annular eclipse of a few years ago in Farmington, New Mexico.

originally posted by: Lazarus Short
I live only about an hour away from Saint Joseph, Missouri, a prime location to view this thing, and I still have my welding glass from the annular eclipse of a few years ago in Farmington, New Mexico.

Recommend buying viewing glasses now. Americans worship money and as the eclipse gets closer, I expect people will hoard the glasses to sell at high markup.

I bought mine from Amazon a few days ago. A pack of five, cardboard, certified solar glasses only cost $15.

I expect the cost will triple soon.

posted on Aug, 27 2016 @ 08:25 PM
link
I'm very excited for this, I am lucky enough to be square in the center of totality just about centered in the 2 minute 40 second zone! It's to soon for me to take off work but I definitely plan to.

posted on Aug, 27 2016 @ 09:18 PM
link
I read this earlier last week and immediate thought of the video somebody posted here not too long ago, where a man was flying over Alaska and videotaped a Solar Eclipse from his seat on the plane.

So yea... If it's possible I'd like to see this Solar Eclipse from the sky. I should have enough time to plan this.

posted on Aug, 30 2016 @ 05:48 AM
link
I am trying to arrange a holiday to the USA next August to see this eclipse. It is three weeks after my 50th birthday, and (interestingly) in the same Saros series as the eclipse of 1999 August 11 (the only time to date that I have been in the Moon's umbral shadow; it was cloudy so I didn't get to see the totally eclipsed Sun in the sky, but the darkness during the day was breathtaking to experience).

posted on Aug, 30 2016 @ 02:07 PM
link
a reply to: _BoneZ_
Not to change the subject or anything,but here in So Calif at about 5 am I happened to notice what looked like the moon eclipsing another planet,eclipsing about 10:50 odd angle,I took a picture on my cell phone not all that great,I have a big street light next to me distracts it,wish I had my cameras here,pretty bizarre,had to take picture so family wouldn't think I'm getting dementia

Not to change the subject or anything,but here in So Calif at about 5 am I happened to notice what looked like the moon eclipsing another planet,eclipsing about 10:50 odd angle,I took a picture on my cell phone not all that great

What you almost certainly saw was a very slender crescent Moon. New Moon (where the Moon passes between the Sun and Earth in the sky; the entire sunlit hemisphere is pointing away from Earth) is at 09:03 UTC on Thursday September 1.
edit on 31-8-2016 by Mogget because: (no reason given)

Advertise now mate. Rent your property $2,000 plus, for a view. Spend a little time outdoors.

Bump. It's time to make your vacation plans now if you want to go see the eclipse. I hear Ozzy Osborn having a eclipse concert in Illinois. I'm going to try to catch it in St Joe Mo. myself.